At this point, the “Ip Man” franchise has firmly embedded itself in our collective consciousness as one of the greatest martial arts movie series’ of all time. If there were any further proof needed of that, look no further than the breakout character of the series’ third chapter getting his own solo adventure in the form of “Master Z: Ip Man Legacy”. With the great Yuen Woo-ping at the helm, superb fight sequences, and a reliably engaging performance by Max Zhang, “Master Z” easily lives up to the wider domain it inhabits while managing to tell its own story that at once feels unique and familiar within the “Ip Man” Cinematic Universe.

Cheung faces off with the mysterious Sadi

Following his defeat at the hands of Wing Chun Grandmaster Ip Man, Cheung Tin-chi has kept a low profile. Exiling himself from the world of martial arts, Cheung now runs a grocery store while spending more time with his young son, Fung. However, he finds himself pulled back into his old life after coming to the defense of Nana, a young woman fleeing the henchmen of local crime boss Tso Sai Kit, to whom her opium addiction has left her indebted. Tso retaliates by burning down Cheung’s grocery store, but his act of bravery is rewarded by a woman who had assisted in Nana’s rescue, Julia, who gets Cheung employment and housing at the nightclub owned by her brother, Chiu Kam Fu.

Sai Kit’s sister, Ngan Kwan, puts a stop to further violence by her brother’s gang, out of her desire to transition her criminal empire into a legitimate business. However, Sai Kit continues to escalate the drug war on the streets of the city, with help from Owen Davidson, a fearsome club owner rising up within the criminal underworld himself. 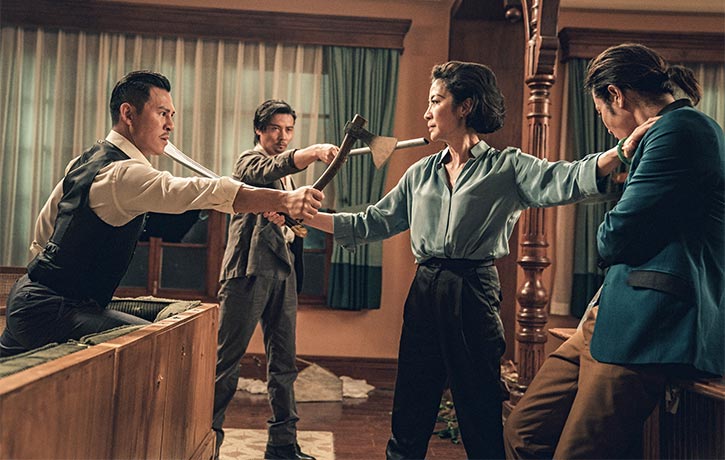 Tso holds off Cheung and Chius attack on her brother

If anything were testimony to the impact the “Ip Man” franchise has had, it’s the series’ ability to launch a spin-off on a completely unrelated, albeit extremely popular, character. What’s also striking is how much Cheung Tin-chi’s story in “Master Z” manages to be distinct from his former adversary’s while also running parallel to it.

As we saw our hero experience in the original “Ip Man”, Cheung’s concern lies exclusively with protecting his son after falling on hard times, and largely leaving his life as a martial artist behind until it’s simply no longer possible to do so. What makes it different for Cheung are the feelings of shame and defeat that have left him where he’s at, in contrast to Ip Man finding himself pushing coal carts purely due to economic plight. Indeed, you get the distinct impression that Cheung would probably be far worse off if he didn’t have his young son to look after, and rather than setting Cheung up to make a bid for redemption, the film instead positions itself as more of a father-son bonding tale, and a pretty heart-warming one, at times.

Chiu wants to see what Cheung is made of

The scenes of Cheung sharing a quiet dinner with Fung, along with the younger Cheung attempting to stand up to a gang of bullies scoffing at his father’s skills really end up being the glue that holds the film together amid its abundant fight sequences. And yes, let’s talk about those!

Not even five minutes elapse into “Master Z” when we get our first glimpse of Tony Jaa in action as the mysterious assassin Sadi, and while it’s brief, it frames his more thorough duel with Cheung later in the film. Tony’s role in the film isn’t that dissimilar to his appearance in “Furious 7”, that of a henchman largely present to engage in some flashy fights with the hero, only this time adopting a wardrobe that suggests he’s stepped out of “Billie Jean” or “Smooth Criminal”. Though Sadi isn’t given much to flesh out his character with, his rumble with Cheung is easily one of the film’s highlights, and a nice compliment to Tony’s previous battle with Max Zhang in “SPL 2”.

Michelle Yeoh is more of an observer for the bulk of the film, and as she’s been doing for the last few years, flexes her acting muscles as a former crime boss trying to go legit while battling a little sexism along the way (she’s certainly far less of a villain here than she was in “Crazy Rich Asians”). Nevertheless, she gets to show how much she’s kept up in a sword duel with Cheung while a massive battle with her brother’s axe-wielding gang unfolds around them.

Chiu is eager to test his skills against Cheung

Sadi is ready to rumble 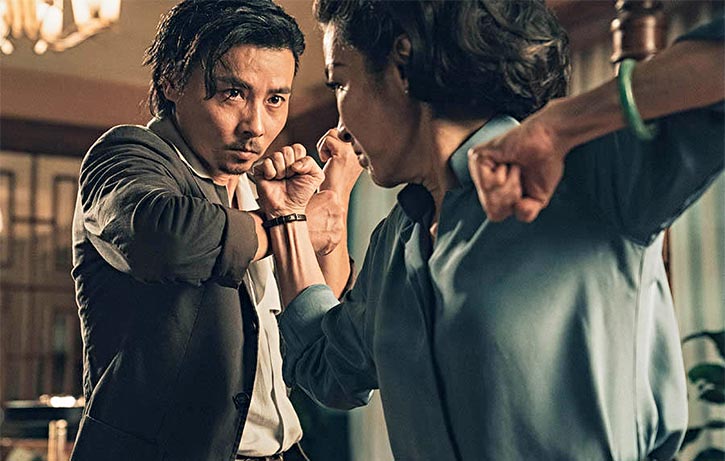 Tso isnt above getting a little rough in her business dealings

In the role of Chiu, Shi Yan Neng is equal parts comic relief and Cheung’s partner in battle, tickling our collective funny bone in a light-hearted sparring match with Cheung one minute before throwing down the gauntlet with him in the aforementioned axe-battle the next. Yan Neng’s seriously got to be one of the fastest kickers alive, as we clearly see in Chiu’s hand-cuffed face-off with Owen Davidson late in the film. Speaking of whom, after his portrayal of Tong Po in “Kickboxer: Vengeance”, Dave Bautista’s really carving out a nice niche for himself as a martial arts movie Goliath, with his pro-wrestling skills put to just as great a use as Mike Tyson’s boxing was in “Ip Man 3”.

Cheung’s final confrontation with Davidson is the most rough and rowdy fight the film has to offer, and among the best to date for both Zhang and Bautista, our hero cool, calm and collected while his enemy goes at it like a bull in a china shop inside of his own nightclub. What makes it that much sweeter is the final, almost ninja-esque send-off Sadi gets that bookends the finale (that’ll make sense in context, I promise!)

Launching a spin-off from the “Ip Man” series was always going to be a tight-rope act, even with such a popular supporting character as Cheung Tin-chi. However, with excellent fight scenes and Yuen Woo-ping’s always superlative direction, “Master Z” earns its place within the “Ip Man” Legacy. Max Zhang is every bit as captivating in what is now his signature role as Donnie Yen was in his, and the film keeps things both simple and emotionally engaging with a story as relatable as a man just trying to be a good role model for his impressionable son. When you ponder the fact that we are being treated to “Ip Man 4” and an “Ip Man” spinoff in the same year, we aficionados of action have good reason to consider ourselves spoiled in 2019!

Cheung vowed to always look after his beloved son

Cheung takes a job as a waiter in Chius bar

Cheung Tin chi prepares to face off with Owen Davidson

“Master Z: Ip Man Legacy” is now in select theaters in the US. What are your thoughts on the increasingly popular Max Zhang returning to his breakout role from “Ip Man 3”? Which other action stars would you like to see challenge Max? Let us know in the comments below; Like, share and join in the conversation on Facebook and follow us on Twitter and Instagram.

Want to be a Master (A to) Z? Then step into the FUniversity for exclusive in-depth interviews, subscribe for videos on YouTube and order products from our official store (Send us a pic of yourself wearing KFK gear in your fave warrior pose, and we’ll share it with the world on our growing Facebook & Instagram Fan pages!)

Hobbs and Shaw — Trailer No.2