Red Trousers: The Life of the Hong Kong Stuntmen (2003)

Although primarily a documentary, “Red Trousers” incorporates the short fantasy film “Lost Time”, to illustrate how stunts are prepared and performed.

Robin Shou co-wrote, produced, directed, narrated and starred in both the documentary and the film.

The documentary features interviews and contributions from notable Hong Kong movie figures such as Sammo Hung and Lau Kar-Leung.

Former Peking Opera student and renowned Hong Kong stuntman and choreographer Ridley Tsui, gives an insight into the day-to-day workings of directing and choreographing Hong Kong stunt performers. Ridley has worked on many classic Hong Kong action films including “God of Gamblers”, “Tiger on the Beat II”, “Full Contact” and “Born to Fight”, as well as “Mortal Kombat: Annihilation”, with Robin Shou. 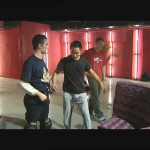 Working out a wire gag 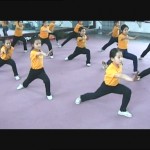 The concept of the documentary is an innovative one. Take a Hong Kong-style action film, and then reveal how the stunts were practiced and performed in real-life, in order to celebrate the work of the Hong Kong stunt performers.

The documentary commences with the short action film, “Lost Time”. Robin Shou makes his way through a nightclub working his way up to Mr Goa’s (Mike Leeder) office. After taking out Mr Goa, a guard is dispatched through a plate-glass window, and we hear “Cut!”. The stunt team rush in to ensure their colleague is unhurt, which he thankfully is, and it’s a pat on the back for a job well done!

Cue a montage of the most painful-looking and bone-crunching falls, hits and flips from various Hong Kong films: stuntmen are hit by cars, fall off bridges onto moving vans, get kicked in the head, bounce off walls and smash through windows. In stark contrast, the film cuts to footage of a traditional Beijing/Peking Opera taking place in the winter, with the actors putting on make-up, singing and dancing. Robin Shou reveals that the term “Red Trousers” originates from the red silk trousers that are worn by the opera performers. The performers join an Opera School as children and train long and hard every day to learn the various opera skills of song, dance, acting, martial arts and acrobatics. 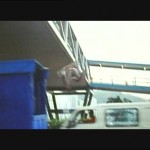 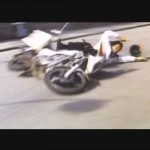 Sometimes the stuntmen perform without wearing any pads 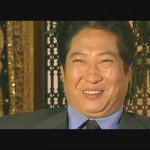 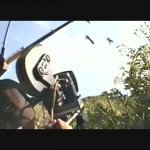 As film started to become more popular after the end of the Second World War, and interest in the traditional Beijing Opera began to wane, the opera performers started working in films as actors or stunt performers. When a filmmaker needed people who could fight and perform stunts, they would go to the opera school and ask for “the red trousers”, and so began the Hong Kong stunt industry. Famous “Red Trousers” include Jackie Chan, Sammo Hung, Yuen Biao, Yuen Wah, Tony Leung and Ridley Tsui, who went on to shape the entire Hong Kong action film industry.

The documentary features plenty of interviews with stars such as Sammo Hung and Lau Kar-Leung, along with many jobbing Hong Kong stunt performers, regularly interspersed with scenes from “Lost Time”. The plot of “Lost Time” involves Robin Shou as “Evan” and Beatrice Chia as “Silver”, who are part of a mythical league of assassins. They must kill the other assassins before they themselves are killed. 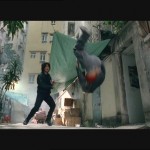 The action is presented in various forms throughout the documentary. The film “Lost Time” presents the viewer with various fight scenes and stunts. Throughout the documentary we are shown how the actors and stunt doubles prepared for and filmed each scene. One stuntman, Chow Cheung Duck is rehearsing a fall off a gantry onto mats. He isn’t happy with the way the stunt has gone and neither is the director, Ridley Tsui. It is revealed he is a former wushu competitor, more accustomed to fight choreography than these types of stunts. Ridley recognises Duck’s potential, but also that if he pushes him too quickly, it could lead to a serious injury. Duck eventually gets the stunt right, with no mats to land on, but it takes three takes, making him feel embarrassed, such is the pressure on the stuntmen.

Stuntman, Jack Wong, has to perform a particularly difficult stunt where he is required to jump from a balcony, hit a lamppost, and land on some rubbish bags on the pavement below. Unable to control his momentum, he grabs onto the lamppost and is unhappy with the end result. He insists on doing it again, and Robin Shou tells him to put some pads on. Wong refuses to use pads, and goes straight back up the stairs to repeat the stunt! 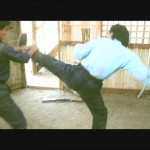 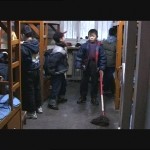 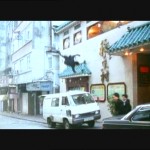 Some of the most spectacular action comes from the clips of Hong Kong films from the eighties, many of them involving Ridley Tsui. A former Beijing Opera performer himself, Ridley shows he is at home fighting and flipping in a barn, in an office or on concrete. Most spectacularly, we see him falling from a bridge onto a moving truck, bouncing off that onto a moving van, and then finally landing on the road! Ridley recalls getting on set at 05:30 and completing the scene by 05:45!

Even though there is a serious risk of injury or breaking a bone, the stuntmen rarely say no to these types of stunts, for fear of not being given work in the future. The stark reality of a stunt going wrong is brought home with the footage and story of stuntman, Wang Hua. Whilst performing a wire-stunt some thirty feet high over rocky ground, Hua’s wire snapped and he fell straight to the ground. The footage of him lying on the rocks, covered in blood and crying out in pain, is a grim reminder of the dangers the stuntmen face. Hua broke his leg and had to have metal pins inserted. He was paid just US$25 per day for the stunt.

The rest of the action comes from seeing present-day opera performers training. The children train hard, performing handstands for hours along with endless backflips and somersaults. In spite of the hardship, many of the students feel indebted to their parents for giving them the opportunity to become opera stars. 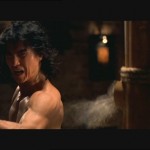 Lost Time is the Movie within the Documentary 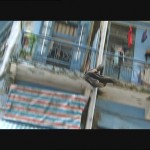 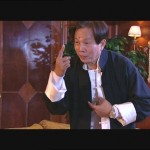 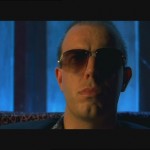 “Red Trousers” is an admirable attempt to highlight the work of the Hong Kong stunt industry.

The interviews with the present-day stuntmen reveal how they love their work, how honoured they are to be in the movies, how of course they’re frightened, but it’s a matter of pride to do a stunt once you have agreed to it. If word gets around that they’ve balked, people will say they have lost their nerve, and the work will dry up.

The “Lost Time” movie-within-a-documentary is pretty poor, with some clunky special effects, and even clunkier acting. But as a vehicle to demonstrate the construction of a stunt, the action sequences are functional.

As an insight into the day-to-day work of a Hong Kong stunt performer, “Red Trousers” just about succeeds. The clips from the eighties action films and the Beijing Opera students training are also enlightening. The section about Wang Hua’s accident make it all very real and is reminder to us all of the effort and risks the stuntmen will take to make sure the audience is entertained.

The interviews with the modern-day opera students reveal the hardship that many of them face. A couple of the children cry, not because of the tough regime, but because of the debt of gratitude they feel towards their parents, and the hope that they will not let them down. (On the two-disc DVD there is extra footage of the opera school). 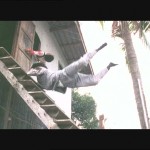 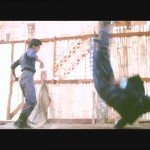 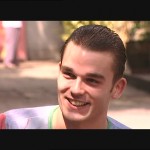 The interviews with Sammo Hung and Lau Kar-Leung are particularly entertaining, but are perhaps an indicator of where this documentary partly falls down (no pun intended!). Near the end of the documentary, Sammo Hung, highlights that over the past twenty or thirty years, he and stars such as Jackie Chan and Yuen Biao, helped focus the international acclaim of Hong Kong cinema. Now the opera schools have changed and are a dying art. The graduates are not like the “old school” of Sammo Hung and his peers. Sammo concludes, “It’s at a low point now”. “Red Trousers” documents that low point, and it is a shame it wasn’t made in the nineteen-eighties.

Even though it occasionally comes across as a vanity project, Robin Shou’s enthusiasm for the art and admiration for the “red trousers” shines throughout. Aficionados of the subject matter probably won’t find anything new. For the general viewer however, “Red Trousers” is a fascinating look at the remarkable men and women who go that little bit further to give fans some of the most incredible action ever put on film. 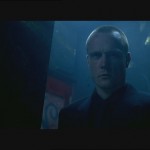 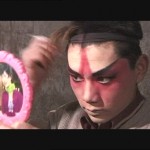 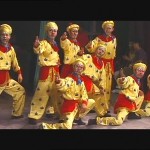