2019 has marked a wide swath of new trends in action movies, but a welcome one indeed has been the sheer number of stunt professionals either making the leap into filmmaking or solidifying the upward trajectory of such a career transition. Whether it was Chad Stahelski’s grand slam “John Wick: Chapter 3 – Parabellum“, David Leitch’s pairing of opposites “Hobbs and Shaw“, or Jesse Johnson taking a true victory lap with “Triple Threat“, “Avengement” , and “Legion Maxx“, a sizeable chunk of the year’s best action movies had stunt pros in the driver’s seat.

Veteran stunt man Kensuke Sonomura, a well-known name in Asian action, [known for his work on “Biohazard Regeneration” (2008), “Bushido Man” (2013) and “Godzilla: Final Wars” (2004)] is the latest to join that arena with his directorial debut “Hydra”. A lingering cauldron of suspense and tension for the first half of its brief 77-minute run time, “Hydra” hits the gas in its finale to definitively establish that quality always overrides quantity.

Plot…mellow in the early going

To his co-workers in the sushi bar Hydra, Takashi, played by Masanori Mimoto, is a quiet, unassuming chef, albeit one whose attention to detail and skill with cutlery suggests he’s overqualified for his job in more ways than one. Unbeknownst to them, Takashi is actually a trained assassin for an underground vigilante organization that rights the wrongs of Tokyo’s criminal underworld.

Though Takashi is determined to leave his life of killing behind for the humble life of a chef, he soon finds himself recruited for one more job, which eventually involves rescuing kidnapped friend.

Takashi teaches some self defence techniques

“Hydra” isn’t wall-to-wall action, and even for its unusual brevity, the assassin combat is held in reserve after a brief flash of a hit inside of a public restroom that kicks the movie off. However, there’s also a surprising amount of depth that Somomura brings to the film, as does his fellow stunt vet and “Bushido Man” co-star Masanori Mimoto in his portrayal of Takashi.

Starting the movie off with such a blast of savage violence, the first half of the movie plays out like a tense waiting game for when the shoe is finally going to drop again. Even amid Takashi’s cheerful interactions with his co-worker Rina and the self-defense lessons he gives her, he can see the writing on the wall that his efforts to hang up the sword are about to be put to an end. 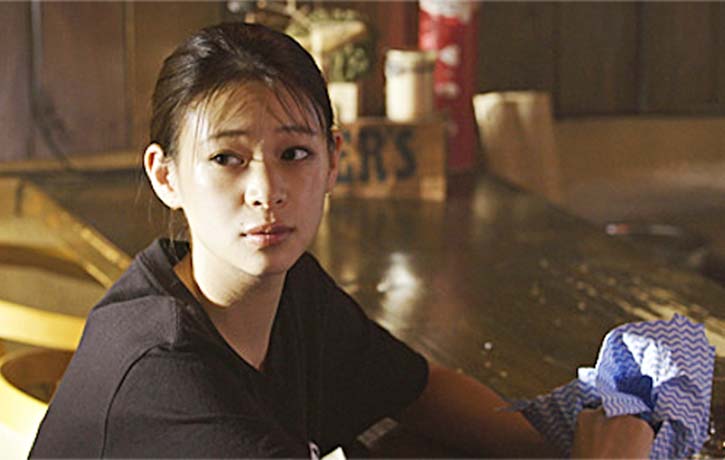 Tension surfaces at the Hydra bar

Before the second half arrives, Takashi had hoped that an occasioned alleyway threat would be enough to put out the fire before it’d start, but soon it finally comes time for him to fully spring into action. “Hydra” has managed to build up more potential energy than expected from such a short movie.

The build up is really reflected in the martial arts battles that make up of the latter half of “Hydra”, with assassins unleashing everything they’ve got upon each other at such a rapid pace that the action scenes feel just this side of being on fast-forward.

Scored to the sound of jean jackets rippling with every punch and knife strike, Sonomura and Mimoto have crafted genuinely heart-racing battles of blades, fists, feet, and grappling techniques, made just a little unnerving by the lack of dialogue or emotional expressions of any kind on the part of everyone involved. The basement showdown especially feels like something out of the Donnie Yen MMA playbook, with Mimoto and his final enemy never pausing for a moment between fist strikes and grappling maneuvers, with their smackdown, and with it the movie, taking an unexpected path to its conclusion.

With stunt pros behind and in front of the camera, “Hydra” makes you wait for the meat and potatoes, while delivering five-star service when they finally arrive. With a running time below eighty minutes and action scenes that are kept in check, “Hydra” might well be better viewed as a proof-of-concept, with Sonomura and Mimoto demonstrating what they can do on very limited resources and allowing fantasies of what more bountiful resources will allow to dance in the heads of all onlookers.

Nevertheless, “Hydra” ratchets up the suspense and tension in its first half and wows with superb martial arts action in its second, and in so doing, further cements the ascent of stunt people-turned-action-filmmakers. This enters Kensuke Sonomura and Masanori Mimoto as the latest members of the new-founded country club putting them on the action radar for what they do next!

Hydra The film by Kensuke Sonomura

HYDRAte yourself! Slake your thirst for action by diving into a veritable ocean of FU reviews, Top 5’s, Top 10’s, exclusive interviews, fill your Christmas gift sack with KFK gear for the martial artist in your life and stay tuned for more fluid moves by subscribing on YouTube!

Ip Man 4: Final Trailer and a look back on the series