Dazzler Media presents Ip Man: Kung Fu Master, the latest take on the life of the legendary martial arts master. Returning to play this iconic role, Dennis To is back for the latest outing in this wildly popular, fight-filled franchise, boasting world-class martial arts action!

Available to pre-order on digital from iTunes, and Blu-ray & DVD via Amazon, releasing on 19th April!

Former World Wushu Champion and Asia Games medallist Dennis To Yue-Hong returns to star as “Ip Man”. To had played minor roles in Donnie Yen’s “Ip Man 1 & 2” and “Bodyguards & Assassins”, before his first breakout role as a younger version of the famous Wing Chun master in “The Legend is Born: Ip Man”. He previously reprised the role in “Kung Fu League”.

Actress Yuan Li Ruo Xin stars as the feisty leader of the Axe Gang “Qing Chuang”. She has previously played supporting roles in “The Demon Master”, “The Cage of Time” and “The Rules of Love”.

Zhao Xiao-Guang stars as the scheming Japanese chairman of the Chamber of Commerce, “Sasaki Zuo”. He is joined by the deadly military enforcer “Major Tokugawa”, played by Ren Yu.

Michael Wong Man-Tak has a cameo as mobster boss “San Ye”. Wong has had a long and varied career in Asian cinema since the eighties, appearing alongside the likes of Jackie Chan, Brandon Lee, Chow Yun Fat, Donnie Yen and Jean-Claude Van Damme. Fluent in English, Cantonese and Mandarin, he is best known for his roles in “Beast Cops”, “In the Line of Duty“, “Legacy of Rage”, “City Hunter”, “Thunderbolt“, “Knock Off“, “From Vegas to Macau” and “Skiptrace“.

Decades before becoming Bruce Lee‘s legendary teacher, the young Ip Man, a police officer in Foshan and soon-to-be a father for the first time, finds himself in the middle of a deadly plot.

Out for vengeance is Qing Chuang, the dangerous daughter of a ruthless-but- honourable mobster who has been killed under mysterious circumstances while in custody at the police station.

Ip Man faces revenge, corruption, and the arrival of the Japanese army in Guangdong province, building to a powder-keg of tension with the local Chinese population.

Dennis To is back as Ip Man

A pretty spectacular opening fight kick starts the action, with Dennis To’s incarnation of Ip Man taking on an axe gang of what seems like hundreds of mobsters.

It reminded me a bit of the “Burly Brawl” from the Hollywood blockbuster Matrix Reloaded, but instead of Neo’s gunshu / pole skills, the bad guys are dispatched with the direct strikes and chain punching Wing Chun exponents will recognise.

The Opening Scene is Little Like the Burly Brawl!

Bringing on the Wing Chun…

A staircase fight with dozens more of the axe gang focuses more on the re-directional blocking techniques of Wing Chun, as Ip Man pulls his punches, not wishing to seriously injure anyone. He us ably supported by Uncle Qiao Wu, who brings the bigger techniques and postures of traditional kung fu to the fore.

Dennis To: The Smooth Wushu Athlete

A fight at a mourning ceremony sees Dennis To firing off silky smooth pole skills as he again takes on dozens of axe-wielding thugs. Being a former wushu athlete, he looks much more natural performing this type of weapons choreography.

There is nice little sparring scene between Ip Man and Uncle Qiao that has a touch of Drunken Master to it, as they swig wine between punches and blocks.

A couple of stylishly-filmed fight scenes take place in the rain, with the water spraying in slow motion to emphasise the strikes and blows. Much like “Legend of the Fist – The Return of Chen Zhen”, there is a nod to Bruce Lee’s black-masked hero ‘Kato’ from the sixties television show “The Green Hornet”.

A challenge match against Japanese army Major Togugawa takes cues from both Donnie Yen’s “Ip Man” and Jet Li‘s “Fearless”, with the nefarious Japanese bad guys trying to unfairly swing the fight in their favour.

As with any iteration of the Ip Man story, this is inevitably going to be compared to the Donnie Yen / Wilson Yip series of films. This film is not without its merits, but the action, and certainly the emotional drama, are far superior in Yen’s tetralogy. I always thought Dennis To was closest in looks to the real Ip Man, and now that he’s a few years older, he looks even more like him!

Whereas the “Legend is Born” gave To an interesting opportunity to explore the youthful, inexperienced Ip Man, the script for “Kung Fu Master” leaves him with little more to do than be noble, righteous and patriotic.

Wushu athlete Dennis To is great with the pole

It makes for a rather bland performance, which is no fault of the actor. It’s a shame, as given more meat on the bones, I think To could deliver as well in the dramatic stakes as he does in the action scenes.

Looking like a young Jimmy Wang Yu, Zhao Xiao-Guang is appropriately sinister as bad guy Sasaki, but also has to follow a few clichés from the script. Yuan Li Ruo Xin as the hot-headed Qing Chuang and Yue Dong-Feng as the wine-swilling Uncle Qiao Wu, both acquit themselves well in the acting and the action.

The weakest link in the film is that our hero never really seems to face a proper nemesis or genuine threat. He dispatches dozens of axe-wielding thugs with apparent ease, and for the final showdown with Togugawa, he seems to barely suffer a blow.

The action is entertaining

Putting all this to one side, where this film does excel is in the martial arts scenes. For the most part, a grounded approach is taken to the fighting with the wirework mostly used on the recipients of any strike.

There are lots of genuine Wing Chun techniques thrown in that fans of the art will recognise and enjoy. The action is entertaining and, like the movie overall, very well filmed.

At around 80-minutes running time, this is a nice little fix for fans of the various Ip Man films, packed with some fun fights! 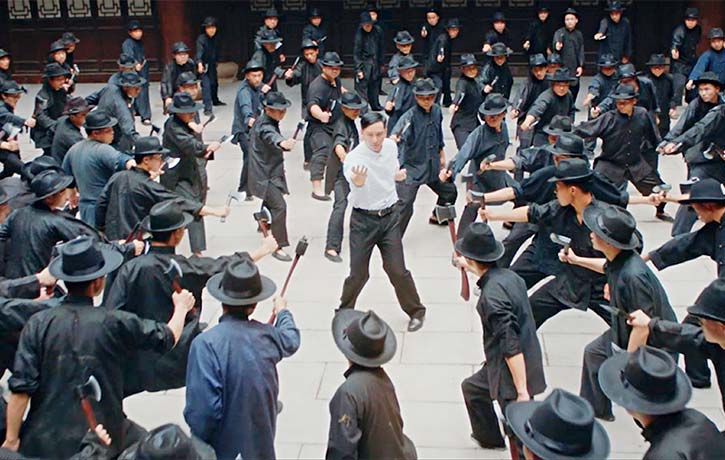 Ip Man fights against the odds

“Ip Man: Kung Fu Master” releases on April 19 – you can pre-order this entertaining addition to the Ip Man movie canon via iTunes, or get your Blu-ray or DVD copy from Amazon.

Have you seen this film? How do you feel it compares to other kung-fu films featuring Ip Man? Would you like to see Dennis To reprise the role now that Donnie Yen has given up the mantle? Let us know in the comments below; Like, share and join in the conversation on Facebook and follow us on Twitter & Instagram!

IP MEN: ARE YOU ONE OF THEM? Get more close-quarters insights in the FUniverse with these Top 10’s, Top 5’s, exclusive interviews, keep Wing Chun-ning in KFK GEAR, and subscribe for all forms of legendary FU-ACTION on YouTube!