Having previously worked with the ‘Muscles from Brussels’ on 1997’s “Double Team” Tsui Hark and Jean-Claude Van Damme reunite to bring us more fast and furious kinetic Hong Kong-style action in this funny and exciting comedy spy-thriller.

Jean-Claude Van Damme plays Marcus Ray a happy-go-lucky sales rep for American clothiers V-Six Jeans, who also runs a side business selling counterfeit or “knock off” goods. His partner in crime is Tommy Hendricks played by American funny man Rob Schneider – a friend and fellow V-Six executive who enjoys the more hedonistic side of the fashion industry while keeping a secret from his partner.

Lela Rochon is V-Six Jeans’ trouble-shooter Karen Lee sent to Hong Kong to confront the dubious duo about a shipment of counterfeit jeans, believing them to be involved in the operation. Karen also hides a deadly secret of her own.

Perhaps more famous in the role of a gangster in films such as “Good Fellas” Paul Sorvino steps into the fold as head of CIA, Harry Johansson, in Hong Kong hunting a group of Russian terrorists using Marcus and Tommy’s knock off business to peddle some deadly explosives.

There’s just 72 hours to go before Hong Kong is handed back to China after 130 years of British rule. Marcus Ray and Tommy Hendricks are a couple of sales executives for international clothing company V-Six jeans who enjoy living the high life whilst running a sideline in knock off merchandise.

When some heavies try to kidnap and kill their friend Eddie, Marcus and Tommy find themselves embroiled in a conspiracy involving a gang of Russians, duplicitous CIA agents and micro-bombs hidden in counterfeit jeans. Marcus and Tommy work with the CIA to find the jeans and stop the Russians from carrying out their terroristic plans. 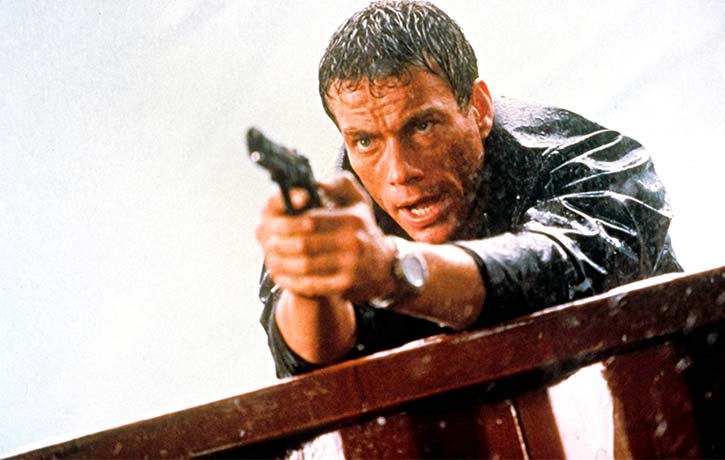 Marcus and Tommy know they are in trouble

Any Tsui Hark film is guaranteed to entertain on some level but this second collaboration with Van Damme (after “Double Team”) whisks up a pleasing blend of comedy and thrills that hit the mark.

Tsui captures viewer attention sending them on a roller-coaster ride with his zany, frenetic filming style. He injects more thrills into every kick, leap and punch along with his dizzying, trademark close ups, stylish slow mo, and fast edits which keep the film moving along at a brisk and entertaining pace even during the non-action scenes.

Second unit director and legendary choreographer, Sammo Hung, brings the best of Hong Kong cinema to the West. The rickshaw race featuring Van Damme and Schneider is pure vintage Hong Kong action straight out of classic films such as “Dragon Lord” and “Project A” – the same is true of the fruit market melee (featured in our JCVD Top 10), as our dynamic duo flee a horde of knife-wielding thugs. Both scenes are fun and thrilling to watch with the two stars making a perfect double team of their own, Van Damme is clearly at ease and at his best with this faster, more almost acrobatic fighting style.

The Van Dammage in progress

That requisite kick to the head 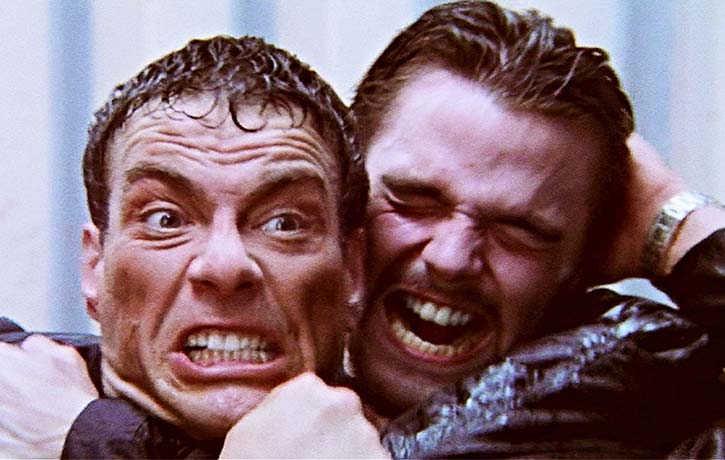 In a clinch with Scar

The film never lets up in its pace, with Van Damme and Schneider exuding plenty of the kind of chemistry you would expect from a buddy film. Their mix of comic banter and rapid fight-fu (yes even Schneider has a go with a few well-placed jiu-jitsu techniques) keeps the film ticking along which brings us to the much anticipated finale.

The harbourside battle pitting Marcus, Tommy, Karen, and Han together is just the type of high-octane, explosive entertainment we come to expect from Hark, bringing the very best of Hong Kong action together. If there’s one minor gripe it’s probably that Michael Wong is not given more opportunity to shine, as a veteran of so many action films. However he proves himself very much a star player with his energy and charisma – carrying his role’s drama off with all the urgency of a lawman fighting to save the day.

Schneider and Rochon are given plenty to do, the latter proving to be a veritable badass with machine gun in hand, and taking out the trash. Schneider, as a comedian proves physically adept in his performance which serves him well as he gets a chance to show off some of his recently acquired fighting skills with great aplomb.

Someones getting the point

Tommy and Victoria get the chair

However, the show belongs to Van Damme as he oozes zeal and skill along with a heady mix of fun and intensity. The scenes of Marcus sliding a deck in between a metallic maze of cargo containers and his engaging fight action overall show just why Hong Kong cinema defined this genre for so long

The mix of frenetic action and zany comedy, hallmarks of Hong Kong action, are all present and accounted for and fit Van Damme like a perfectly tailored suit with nary a crease visible. It’s great to see the cheeky side (no pun intended) of Van Damme’s persona injecting a fun factor into the proceedings which here plays off nicely against his partner-in-crime Rob Schneider. The two work well together and are essentially the Abbott and Costello of their day when they share the screen.

Praise should go to Hong Kong legend Tsui Hark, an action auteur, who like Akira Kurosawa, was influenced by Hollywood filmmaking to finally bring his own wacky style of action-infused cinema to the west.

Checking out the merch 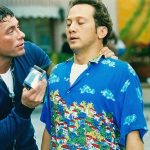 JCVD and Rob Schneider in Knock Off

Things are about to get serious

It’s difficult to ignore his creative skill with the camera and engaging filming techniques that capture the action in all its glory. If you’re looking for a seamless mix of action and comedy with a twisty-edge that brings East and West together amidst a Hong Kong backdrop, you can’t go wrong with “Knock Off” – it’s the real deal!

Remember “Knock Off” from some 20 years back? Refreshingly enough, the action still works making for an entertaining watch today! What are your fave JCVD movies and fights, and what Hong Kong movie action scenes really stole the show for you? Let us know in the comments below; Like, share and join in the conversation on Facebook and follow us on Twitter & Instagram. (Thankfully, no Knock Off’s here, only genuine articles, so Enter the FUniverse with confidence, and click onto these Top 10’s, exclusives, and subscribe for videos too!)