Home » Reviews » Into the Badlands: Season Two – Episodes 4 to 9

The battle of Clippers, Barons and supernaturally-powered teenagers rages on in the second season of AMC’s post-apocalyptic butt-kick-a-thon “Into the Badlands” and what a season it’s been! What began as a six-episode mini-series in 2015 has not only expanded to ten action-packed episodes in season two, but the show will see its scope further widened with the recently announced third season, set to encompass sixteen episodes of pulse-pounding, kung fu-driven adventure!

With the second season having wrapped up on Sunday, May 21st, we couldn’t let the most well-oiled action machine on TV today slide without also covering the middle-section of season two. So strap in and hold tight, here’s our recap of the fourth through ninth episodes of the second season of “Into the Badlands”!

As we re-enter the Badlands, Sunny and Bajie, played by Daniel Wu and Nick Frost, continue to make their way back to the Badlands, with the aim of rescuing Sunny’s girlfriend Veil, played by Madeleine Mantock and their new born son from the clutches of the bloodthirsty Baron Quinn, played by Marton Csokas. Meanwhile, Sunny’s young Colt M.K., played by Aramis Knight, gradually comes to distrust the intentions of The Master and her Abbotts at the monastery, and attempts to flee, finding an ally in fellow warrior-in-training Ava, played by Eve Connolly.

However, they’re soon dismayed to discover that M.K.’s supernatural abilities have suddenly become inexplicably inert. At the same time, the devious Baron known as The Widow, played by Emily Beecham, continues to unfold her nefarious plot to eliminate her rival Barons, and it isn’t long before the exploits of all three parties converge into a most uneasy alliance to bring down Quinn once and for all.

No review of “Into the Badlands” can neglect the clear Hong Kong-influences on the show, but one that becomes much clearer in the middle section of season two is the use of multiple characters’ plot lines and story arches running parallel to one another, all of which eventually converge in time for the finale. In the case of “Into the Badlands”, we see no less than four distinct stories, any one of which could provide enough material for its own series: running side by side in each episode of the second season – from Sunny and Bajie’s journey through the Badlands to rescue Veil, the domineering captivity that Quinn holds Veil and Sunny’s child in, M.K.’s escape from the monastery with Ava, and The Widow’s unfolding plot to eliminate the other Barons and capture M.K.

Tilda wont back down 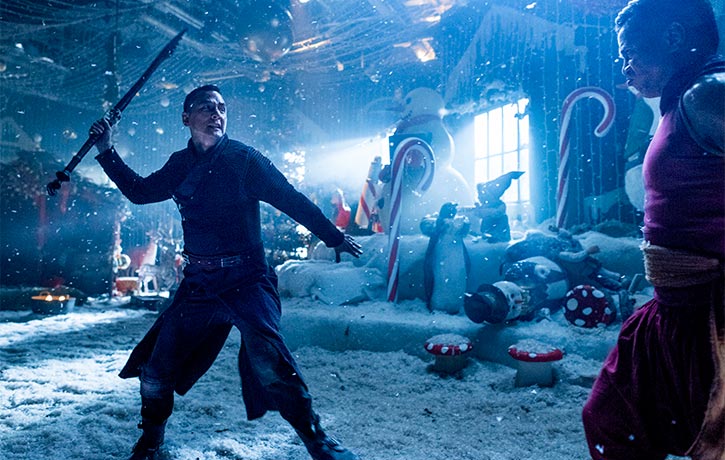 The rematch Sunnys been waiting for

As the season progresses, each story becomes increasingly intertwined and amorphous in a way seldom utilized on television, until the stories of Sunny, Bajie, M.K., and The Widow blend into one by the ninth episode. Like the buddy comedy action capers Jackie Chan, Sammo Hung, and Yuen Biao specialized in during their 80’s heyday, there’s never a moment where “Into the Badlands” isn’t spinning multiple plates at once and doing so with ease!

As the reigning champion of action on the small screen, picking the best fight sequences from “Into the Badlands” is something that one would be wise to sleep on. With that said, The Widow steals the show in no less than two skirmishes in the midsection of season two; the first, a battle of Barons and Clippers in the fourth episode, “Palm of the Iron Fox”, one that’s a bloodbath even by the show’s own lofty standards. The other comes at the end of the ninth episode, “Nightingale Sings No More”, with The Widow breaking ties, in more ways the one with a normally closely trusted ally of hers that gives the series its most bitter point of emotional potency. The episode also gives us a flashback to The Widow’s past and her training as a child, with martial arts prodigy Jesse Jane McParland of “Britain’s Got Talent” fame assuming the role of The Widow as a child – be sure to check out our interview with J.J. too!

The Widow vanquishes a swarm of foes with ease

A flawless jump spinning back kick

It seems Bajie has a few surprises up his sleeves

However, as with season one, it is the episode with MMA legend Cung Le that ultimately takes home the crown, once more. Following a few fleeting appearances in the first and third episodes, Le returns in full force in the season’s sixth episode “Leopard Stalks in the Snow”, which proves as apt a title as any. After The Abbotts track Sunny, M.K., Bajie and Ava down, our heroes must stand their ground in an old department store made up for the holidays with light and fake snow, while Le attacks with an assault of Leopard fist strikes. On top of being the best action sequence of season two, it also unveils some new information about Bajie’s past to the viewer – along with Nick Frost easily scoring the best line of the entire series.

The Widow always comes armed to the teeth

Clippers are always ready for battle

The Abbotts have a formidable leader

“Into the Badlands” got off to an excellent start with the first three episodes of its second season, and maintains that same momentum through its ninth, all while converging multiple story lines into one and continuing to lead the way for martial arts action on the tube. With season two now wrapped, be sure to check out our review on the season finale (Episode 10) as well as final thoughts overview and recap!

Into the Badlands: Season Two – Episode 10