Back in 2000, Jet Li took his first ever lead role in a Hollywood film as Han Sing in “Romeo Must Die” and established himself as another rising kung fu star in America. Three years later, Li collaborated with the same director and producer, as well as some of the same actors from “Romeo Must Die” in “Cradle 2 The Grave”. Of course, when it comes to the top Jet Li movie list, “Cradle 2 The Grave” will probably just achieve an honorable mention, nevertheless it’s one of the more notable films to cross hip-hop culture with entertaining martial arts fights.

Jet Li takes center stage as Taiwanese Intelligence agent Su. Rapper DMX gets his billing as Anthony “Tony” Fait, a professional jewel thief and loving father of Vanessa Fait, played by Paige Hurd. Joining Fait’s team, Gabrielle Union, fellow rapper Drag-on, along with the comedic duo of Anthony Anderson and Tom Arnold, who play Daria, Miles, Tommy, and Archie respectively. Paolo Seganti plays Frenchman Christophe, whom Fait is stealing diamonds for. In our lineup of villains we have Mark Dacascos as the antagonist Yao Ling, along with Kelly Hu and Johnny Tri Nguyen who both lend a hand as Ling’s formidable henchmen. 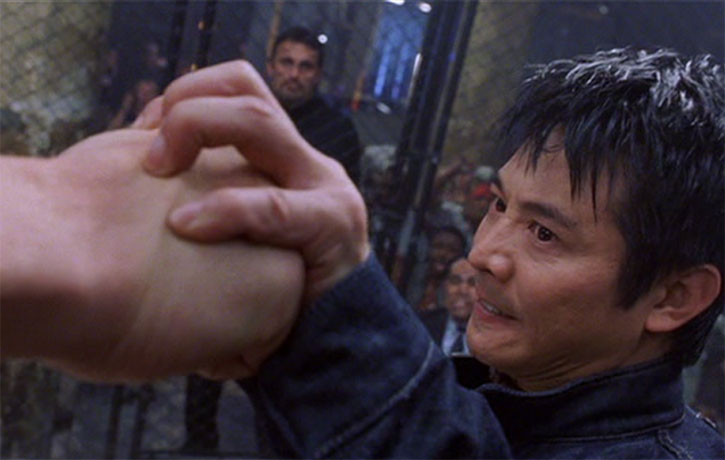 That punch aint got nothing on me big guy

Ill have that earring

Anthony Fait is a professional jewel thief by day, loving father by night. In an attempt to steal diamonds for Frenchman Christophe, Fait’s crew stumble upon some rare but highly valuable black diamonds, which are also being pursued by Taiwanese Intelligence agent Su and sadistic crime lord Yao Ling, who once betrayed Taiwanese Intelligence and almost left Su for dead. After being confronted by Su, Fait learns that Ling has killed Christophe and kidnapped his daughter Vanessa in exchange for the black diamonds in Fait’s possession. Now with a common enemy, Fait and Su must team up to stop Yao Ling. 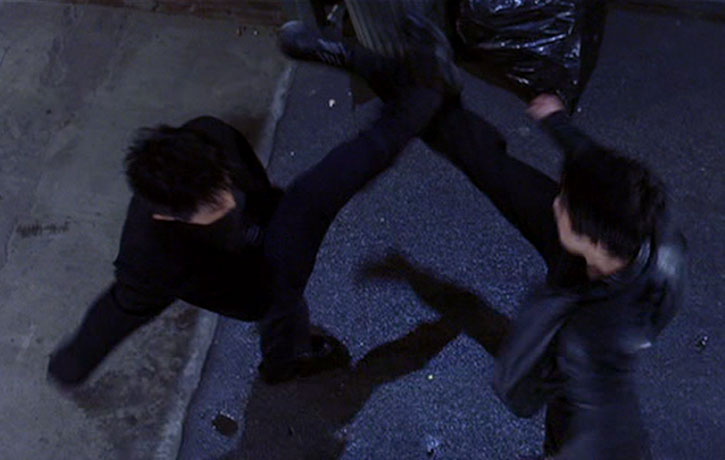 Clash of kicks with Johnny Nguyen

The action in “Cradle 2 the Grave” is enjoyable at the very least. Sure, you’ll see a lot of unnecessary camera editing but the fights are still relatively easy to follow and not once has the film employed the dreaded, corrosive “shaky cam” most modern Hollywood films are guilty of using when it comes to fight action. In addition, you’ll witness DMX and his crew duking it out not just once or twice but at least three times -kudos for the effort! -just sit back realizing that you can’t expect them to bust out seriously seasoned martial artistry!

Whilst the majority of the focus is on Jet Li when it comes to the combat sequences under the direction of Corey Yuen, it seems DMX’s crew still gave their fights their best shot.

Something majors kicking off

Theres more to the black stones than meets the eye

Our two leads duke it out 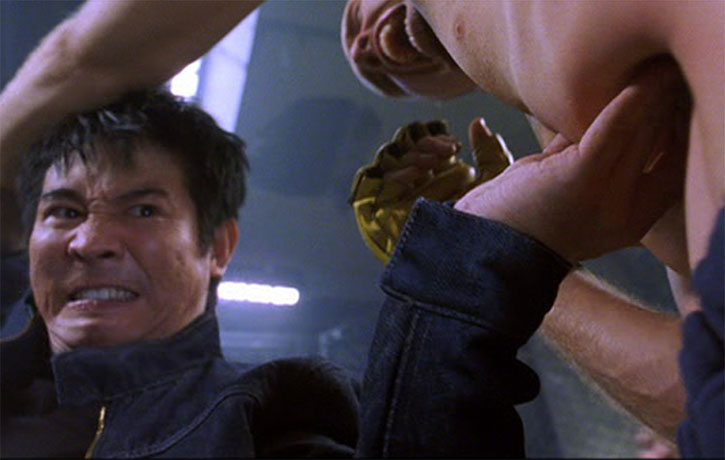 The first half of the film is occupied with some brief exchanges that are not up to a minute long as well as a full-length alley fight in-between. In all these fights, Su goes toe to toe against his opponents with one hand in his pocket throughout. This serves as a hint to Su’s proficiency in combat and fits well with his cool-headed persona, which is further implied by his apparent tendency to wait for his opponent to attack first.

In the first fights, Su makes quick work of Christophe and Miles, having slapped both of them across the face at least once. It gets a lot better after that with the alley fight, in which Su and Fait team up for the first time. When you have the dynamic talents of Jet Li and the accomplished Johnny Nguyen going against each other, nothing should really go wrong. Although Johnny’s character comes at Su with a flurry of flashy kicks and punches and is definitely much stronger than Su’s previous adversaries, Su still manages to keep up with the speed despite barely kicking and having one hand in his pocket. It’s just a simple reminder that sometimes less is more. Fait also doesn’t slack with his bare-knuckle brawling style.

Stay in yo place

Trapped on all sides

Another thing “Cradle 2 the Grave” deserves props for is how it saved the better fights for later in the second half, which consists of a cage fight and of course, the finale between Su and Ling. In fact, the cage fight happens to be the highlight of the film. What starts off as an unwanted confrontation between Jet Li and an MMA fighter (and yes, after Randy Couture, that’s Tito Ortiz!) and later the fight announcer escalates into an all-out brawl against more than 10 fighters.

This scene, which has the theme song “X Gon’ Give It To Ya” playing in the background and shows Jet Li fracturing the arm of a larger opponent and ripping off the earring of another, is entertaining enough. The final fight doesn’t let down either. Set in a ring of fire, the fight showcases Ling as the classic high-powered, super kicking villain who doesn’t cut any slack for our main hero, who is now justified in using both hands instead of one.

OK, so “Cradle 2 the Grave” may live in the shadows of Li’s epic films “Fist of Legend”, “Once Upon a Time in China”, “Kiss of the Dragon”, “Unleashed”, etc., but then again, it’s a different kettle of fish and if you can withhold unreasonably high expectations, it’s actually a good bit of fun! If you are a fan of Jet Li, martial arts and hip hop/rap, “Cradle 2 the Grave” is worth a look.

Despite being a jewel thief Fait is still a loving father

A swift back fist 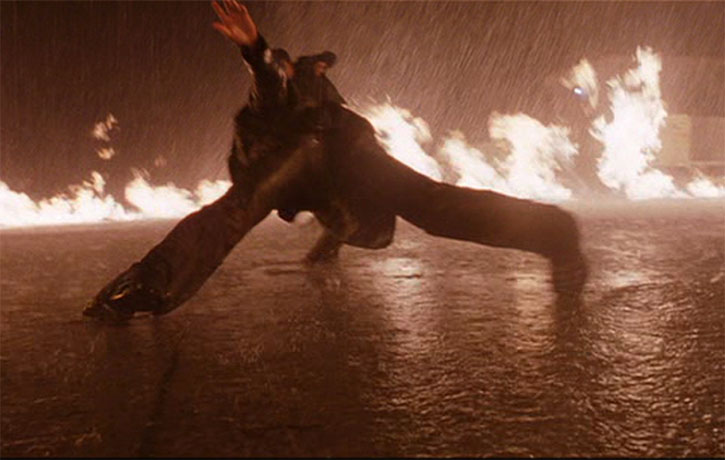 DMX with a need for speed 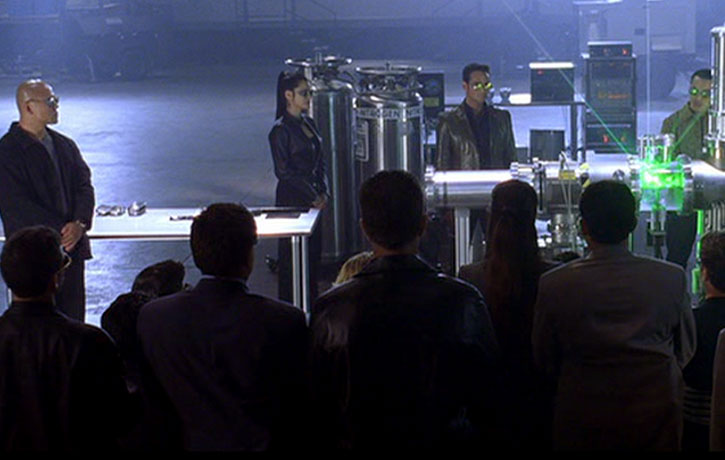 Behold my new weapon of destruction