Martial arts actor and stuntman Lam Ching-ying plays the Taoist Ghostbuster “Master Kau”. It was to become his definitive role, although he had made notable appearances as a fan-wielding assassin in “Magnificent Butcher“, and as Wing Chun master “Leung Yee-tai” in “The Prodigal Son“, arguably one of his finest performances.

Ricky Hui plays the bumbling “Man Choi”. He is best known for his comedy performances and singing career, often working with his brothers Michael and Sam. Outside of his comedy films he can be seen in “Project A II”, “The Inspector Wears Skirts” and “Miracles”.

Hong Kong actor and martial artist Chin Siu-ho stars as the simple student of Master Kau, “Chau-Sang”. He has had notable roles opposite Jet Li in “Tai Chi Master” and “Fist of Legend“, and is the older brother of actor and stuntman Chin Kar-lok.

Playing Master Yam’s daughter “Ting Ting” is Moon Lee. She had previously appeared in the martial arts fantasy “Zu Warriors from the Magic Mountain”, and was to later to become one of the leading female action stars in the late eighties and early nineties, with movies such as “Angel” and “The Avenging Quartet”. 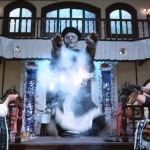 Yuen Wah performs some impressive stunts in his supernatural battles 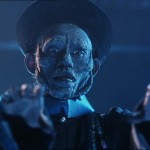 Who ya gonna call! 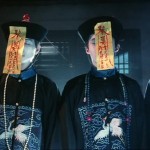 These vampires can be stopped with Post It notes! 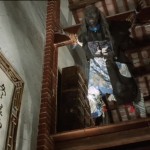 There are some impressive stunts and falls

Director, Action Choreographer and actor Huang Ha, who was the bad guy in “Encounters of the Spooky Kind“, here plays “Master Yam”. He has also appeared in “Drunken Master” and “The Odd Couple”.

Anthony Chan who is best known for being in the Cantopop band “The Wynners”, plays Kau’s friend, “Priest Four Eyes”. He can be seen in “Armour of God“, “Twin Dragons” and “Twinkle Twinkle Lucky Stars“. Playing “Wai”, the cowardly police inspector is Billy Lau, best known for his comedy cameos in films such as “Police Assassins”, “My Lucky Stars“, “The Inspector Wears Skirts” and “Miracles”.

Former model Pauline Wong Siu-fung is the mysterious and beautiful “Jade”. She has appeared in Chow Yun Fat’s “Tragic Hero” and was “Witch Raga” in “The Peacock King”. In 1985 she won the Hong Kong Film Academy’s Best Actress Award for her performance in “Love with the Perfect Stranger”. 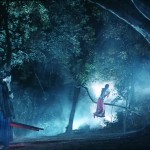 The supernatural scenes have a magical look 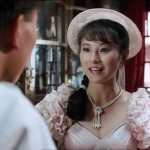 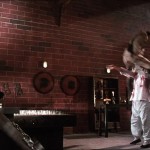 The action choreography is slick, fast and funny 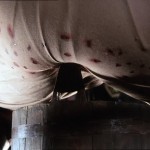 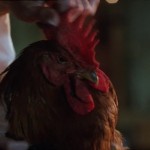 Master Kau, a Taoist priest who performs magic that maintains control over spirits and irrepressible vampires, is asked by a struggling businessman, Yam Fat, to oversee the re-burial of his dead father in the hopes of rekindling his family’s good fortune.

By burying the patriarch on a better plot, renewed success and prosperity are promised. When he opens the coffin, Kau notices the body is still intact, even though it’s been buried for years. Realising that it is a vampire, Kau orders it to be moved to his house for further study and to perform rituals on it that will prevent it from awakening.

Kau suspects the dead elder suffered a wrongful death, which is keeping him in his undead state. Master Kau’s two bungling students, Man Choi and Chau-Sang, fail to prepare the coffin properly, and the vampire escapes. Meanwhile, Chau-Sang is also being seduced by a beautiful but mysterious girl.

The priest and his students soon find themselves up against supernatural forces and a very powerful vampire. To escape the nightmare, Master Kau must rely on his skills, students, and wits. 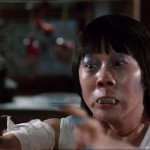 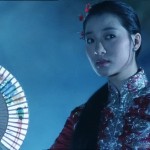 Pauline Wong Siu-fung is the mysterious and beautiful Jade 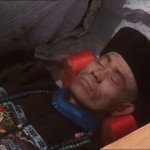 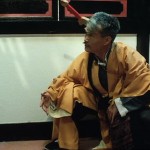 Master Kau must rely on his skills and wits 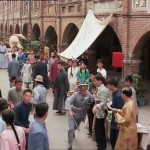 Large and expensive sets were constructed for the film

The movie starts spookily enough with Ricky Hui performing a ritual in a morgue to keep a group of hopping vampires at bay. It soon turns to comedy when Chin Siu-ho turns up dressed as a “Jiangshi” (hopping vampire) to play a trick on his friend. Their antics accidentally free the vampires and Lam Ching-ying accompanied by Anthony Chan come to their rescue. Lam Ching-ying delivers most of the kung fu action, but Chan still manages to get in a few slick moves.

At the police station the inept Inspector Wai inadvertently awakens a vampire. Luckily Chin Siu-ho is on hand as he is there to free his master. He has some terrific gymnastic skills and performs a lot of the hits and falls as well as any of the stunt team.

The film moves swiftly into a sequence involving Yuen Wah as a vampire chasing Ricky Hui and Moon Lee. Lam Ching-ying and Chin Siu-ho soon arrive, and Chin again demonstrates his impressive physical dexterity as Yuen Wah chases him up and over a staircase. Yuen Wah is equally impressive with his stuntwork here, performing numerous leaps and falls, as the priest fights him with his magic tools. 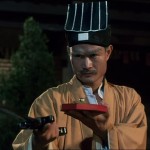 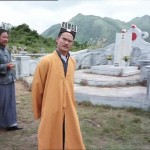 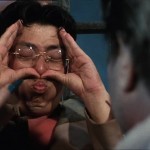 If you hold your breath the Jiangshi can’t detect you 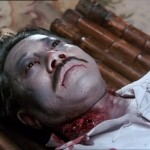 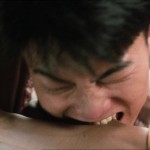 He’s not even a vampire!

To save Chau Sang from being seduced by a spirit, Lam Ching-ying has a supernatural battle with Pauline Wong. She uses a spell to trick Chau Sang, setting up a great fight between Lam Ching-ying and Chin Siu-ho. There is a superb move as Lam Ching-ying leaps two-footed onto Chin Siu-ho’s torso, whilst twisting to take him down.

As they face the recently-awakened, powerful vampire, Lam Ching-ying and Chin Siu-ho take centre stage in the action department. Whilst Lam Ching-ying delivers the more grounded martial arts skills, Chin Siu-ho applies his gymnastic skills as he swings and somersaults around the set like a chimpanzee!

The film concludes with an impressive fire stunt and of course, a comic punchline!

Although “Encounters of the Spooky Kind” kick-started the “Jiangshi” (hopping vampire) kung fu-comedy-horror genre, it was the “Mr Vampire” films that defined it.

The secret of this film’s success is it’s universal appeal. You don’t need to understand traditional Chinese superstitions to appreciate the slapstick humour, the one-liners and the “comedy-of-errors” set-pieces. Director Ricky Lau gives the supernatural scenes a magical appearance and blends everything seamlessly with some top-notch acrobatic martial arts action. I love the dream-like look of the film, as Jade glides majestically in slow motion through the backlit, misty, night time forest in her seduction of Chau-sang, all to haunting music…only to whack her head on a tree branch and fall off the back of his bicycle! 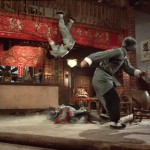 Chin Siu-ho swings around the set like a chimpanzee 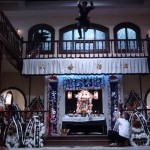 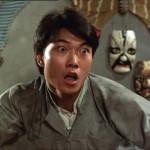 Lam Ching-ying will be forever remembered for his performance as the stoic, mono-browed “Master Kau”. I have mentioned this before, but it is a mystery to me why Chin Siu-ho didn’t become a bigger star. He has the looks, acting ability, and his physical performance in this film is one of his best. Ricky Hui, Anthony Chan and Billy Lau are all hilarious in their roles, and Moon Lee and Pauline Wong are great in their supporting roles, with both of them demonstrating a great knack for comedy when required.

There are a couple of bits that may put viewers off; a live chicken and a snake are sacrificed for real during the priest’s rituals, although for Chinese audiences, this is generally not considered controversial.

“Encounters of the Spooky Kind” is superior in it’s martial arts choreography, especially with it’s barnstorming grand finale, but “Mr Vampire” is a much more accessible movie -a lot funnier and all the more entertaining for it.

A friend of mine once told me that he got up one morning in the Christmas holidays and could hear hysterical laughter coming from downstairs. He went to investigate, and there was his mum, dad and brother all watching “Mr Vampire”! I can’t think of a better recommendation than that! 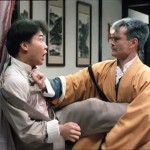 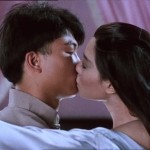 Chau Sang is seduced by Jade 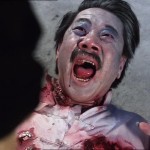 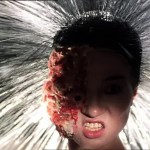 Bad hair day in the eighties! 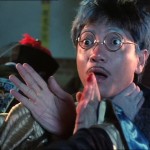 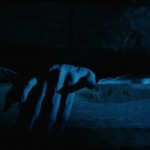