Stephen Chow once again pulls off a reliable blend of comedy and action, toeing the line between goofy and even emotional at parts as he realises his potential and growth as the out of luck Sing. Lam Chi-Chung plays Bone, Sing’s hapless sidekick who you can’t help but endear to as he bumbles his way through the story. Perhaps the most quotable character is the stern Landlady of Pig Sty Alley, who’s very well portrayed by Yuen Qiu and is the centre of attention in any scene she’s in.

Danny Chan Kwok-kwan as Brother Sum, the sleazy leader of the Axe Gang is an ideal villain for the film, coming across as a stereotypical old-school gangster with zero morals. Other roles include Yuen Wah as the Landlord of Pig Sty Alley, Bruce Leung Siu-lung as the Beast and Chiu Chi-ling as Tailor, who each respectively shine in their wacky, yet occasionally serious characters.

Lam Chi Chung as Bone and Stephen Chow as Sing

During the 1930’s in Shanghai, the luckless duo of Sing and his best friend Bone attempt to join the Axe Gang who rule the city. After the leader of the gang, Brother Sum is humiliated by the landlady of Pig Sty Alley, he recruits Sing to help him get revenge by breaking out the Beast, an extremely cold and dangerous kung fu master.

After the Beast wounds the landlady and her husband (the landlord of Pig Sty Alley) who are revealed to be martial arts masters, Sing has a change of heart and tries to stop the Beast only to be beaten down and saved by the landlords. This leads to a final confrontation between the Axe Gang and Sing.

The Landlady puts her tennants in their places

Sing gets a slithering kiss from some snakes

The Beast easily absorbs the blows

The film’s fight and chase sequences are a fun blend of almost Looney Tunes like visuals and stellar martial arts from a cast of younger and retired actors from 1970’s Hong Kong action cinema. A fight scene will often leap from someone’s arm being twisted like a wet flannel to an intense back and forth battle that’s challenging to keep up with!

Very early on, this gives the movie a fresh feel, keeping you on your toes wondering how big or obscene the next fight around the corner will be. It’s reminiscent of the old cartoons you’d watch as a kid on a Saturday morning, with villains using sound to strike the heroes with blades from thin air and characters suddenly speeding away with their legs racing around like Road Runner. The special effects used in these scenes have really held up well too, using them just enough without going over the top.

Prepare for the Buddhist Palm

Shocking everyone the Beast proves his worth 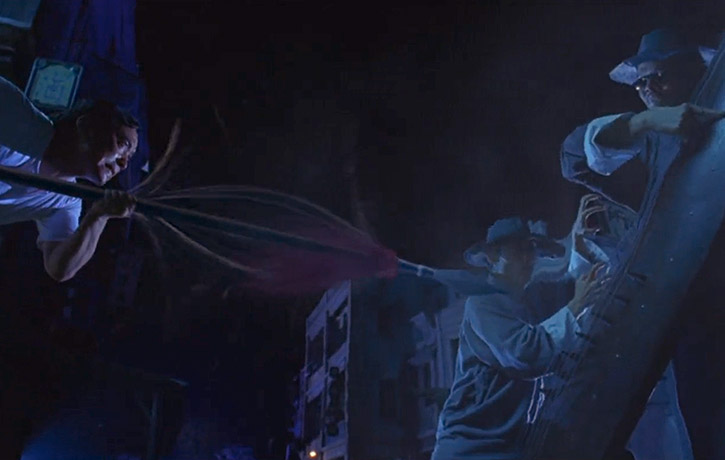 The occupants of the Pig Sty arent quite what youd expect

As the story develops and unravels, the action correspondingly gets more intense as the deadly Beast comes into play as the world’s deadliest assassin. This leads to Sing realising his real martial arts potential leading to a thoroughly engaging brawl. Won’t spoil it but, needless to say, if you were a fan of the kooky action in “Shaolin Soccer” you’ll enjoy this just as much, if not even more!

“Kung Fu Hustle” is alight hearted and fun watch, with hidden moments of depth popping up throughout the course of the film. The quirky antics and sequences will appeal to long-time fans of martial arts flicks and newcomers alike with equal measure -there are huge laughs and solid, complex enough fight scenes to compete with most kung-fu movies out there today. If you’re looking to introduce someone to an entertaining example, a riotous blast of this genre of cinema, then I honestly think that “Kung Fu Hustle” will prove more than up to the task.

The plant pot lands a riot

The Landlady gives pursuit in a memorable chase scene

At close quarters with the Axe dudes