Shaw Brothers kung fu flick, directed by Chang Cheh. It introduced the world to the Venom Mob and became a cult classic that influenced everything from Quentin Tarantino’s movies to the Wu-Tang Clan’s hip hop albums. Released in some territories as “Five Venoms”. Currently available on Netflix!

Chiang Sheng stars as “Yang Tieh”, last student of the Venom House. Born in Taiwan, he was trained in traditional Chinese opera. Talent-scouted by Shaw Brothers he began a long and fruitful working relationship with one of Shaw’s most successful directors, Chang Cheh. Working as an actor and action director, Chiang Sheng’s works included “Invincible Shaolin”, “Crippled Avengers”, “Ten Tigers of Kwantung”, “The Kid with the Golden Arm”, “Legend of the Fox”, and “Masked Avengers”.

High-kicking Taekwondo exponent Sun Chien stars as “Gao Ji/ Scorpion/ Chief Constable Ma”. Another talent found by Chang Cheh in Taiwan, he would go on to feature in many other films featuring his Venom co-stars, and other popular titles such as “The Rebel Intruders”, “What Price Honesty?”, “The Lady is the Boss”, and “Bastard Swordsman”.

Bring on the classic animal styles

Philip Kwok is “Meng Tianxia/ Lizard/ Constable He Yu”. Originally an agile circus acrobat, he entered the film business by chance. His performance in “Boxer Rebellion” caught the attention of director Chang Cheh, who invited him to play the lead in “Marco Polo”. After the success of “Five Venoms”, Kwok became the male lead and martial arts choreographer in various films, including “The Rebel Intruders”, “The Flag of Iron”, “The Sword Stained with Royal Blood” and “Ode to Gallantry”. Predominantly behind-the-scenes after the mid-eighties, Kwok worked as an action and martial-arts choreographer for numerous TV and theatrical productions in Hong Kong. Some of his most notable work was on “Peacock King”, “Hard Boiled” and “A Chinese Ghost Story”. He assisted as a Fight Arranger and appeared as “General Chang” in the James Bond film “Tomorrow Never Dies”.

Wei Pai stars as “Qi Dong/ Snake/ Hong Wentong”. In a long career he appeared in many popular kung fu films including “Last Hurrah for Chivalry“, “The Young Master“, “Return to the 36th Chamber”, “Magnificent Butcher” and “The Prodigal Son“.

Lu Feng stars as “Zhang Yiaotian/ Centipede/ Tan Shan-kui”. At the age of 8, he learnt martial arts at the army-affiliated Junior Lu Guang Drama School. Applying his skills as a stuntman on screen, he caught the attention of director Chang Cheh, making his acting debut in “Shaolin Temple”. Often playing the villain for Cheh, he appeared in “Invincible Shaolin”, “Crippled Avengers”, “The Daredevils”, “The Kid with the Golden Arm”, “Two Champions of Shaolin”, “Legend of the Fox”, “Masked Avengers”, “House of Traps” and “Shaolin Rescuers”, for which he won an Outstanding Supporting Actor award at the 25th Asian Film Festival in 1979. He retired shortly after appearing in “Shanghai 13” in 1985.

The Lizard prepares to strike

The supporting cast features Johnny Wang Lung-wei as “Justice Wang”. Spotted by director Chang Cheh, Wang made his acting debut in “Five Shaolin Masters”. He went on to appear in over eighty movies in twenty years, including classics such as “Shaolin Temple”, “The Brave Archer”, “The Avenging Eagle” and “My Young Auntie”.  From 1985 he used his years of experience off camera as a writer, choreographer and director.

In 1992, he directed the notorious martial arts exploitation film “Escape from Brothel”. Veteran Shaw Brothers star Ku Feng appears as “Bookkeeper Yuan”. He has appeared in over 380 films since 1959! Notable titles include “Come Drink With Me”, “One Armed Swordsman”, “All Men Are Brothers”, “Clans of Intrigue”, “The Sentimental Swordsman”, “Martial Club”, “Peking Opera Blues”, “Legacy of Rage”, “Magnificent Warriors”, and as Jackie Chan’s dad in “Rob-B-Hood”! Martial arts action legend Dick Wei plays the dying “Master/ Head of the Venom House”. He has appeared in classics such as “The Prodigal Son“, “Project A”, “Twinkle Twinkle Lucky Stars“, “My Lucky Stars“, “Yes Madam/Police Assassins“, “Millionaires Express“, “Eastern Condors“, “Dragons Forever” and “Pedicab Driver“.

Lo Meng shows off his impressive physique as Toad 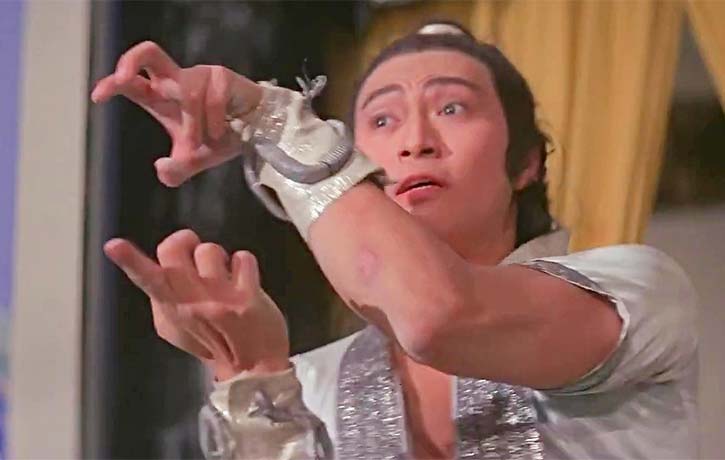 A dying teacher instructs his final student Yang Tieh, to check on the activities of five former pupils, each of whom he taught a unique and special style of kung fu; Centipede, Snake, Scorpion, Lizard, and Toad. The teacher fears these skills might be used for nefarious purposes.

Yang, who knows a little of each style, must team up with one of the other good students in order to defeat the evil ones.

To make things more difficult for Yang, not only does the Master not know the identity of the students, who all wore masks when training, but the students also don’t know each other!

Greed and treachery ensue as Yang discovers that some of the students are indeed evil, but which one can he trust enough to team up with?

It’s a clever conceit to have the different skills and the protagonists not know each other’s identities. As the master narrates, we are introduced to each distinct style. It’s shot beautifully, with some crisp clear slow motion on some of the more impressive techniques.

The strikes are so fast that it is almost as if he has a hundred arms and legs.

Among fans Yang is known as Hybrid Venom

Not everyone likes Iron Maiden

Venomous fangs are emulated with precise finger strikes to a target’s vulnerable points, combined with the stinging whip of a rattling tail. Masters of this ability can even fight while lying on their back.

Kicks from the Scorpion style are just like the stinging tail. When delivered by a master, a single kick can paralyse or even kill, let alone the strong pincer-style attack of the arms to contend with.

Scorpion will rise from the ashes

Just like it’s namesake, Lizard style is best known for the ability to walk on walls, and rebound off them to both dodge assaults as well as strengthen his own attacks.

Strong and muscular, the Toad is invulnerable to just about any form of damage, including blades and puncture. They can even bend solid metal.

Among fans, Yang is known as “Hybrid Venom”, as his training contains a little bit of each of the five styles, but it is incomplete, and he must align with one of the other Venoms to stand a chance against any of the others.

As each member of the Venoms encounters the other, we have the intriguing proposition of witnessing the strengths and weaknesses of each style. The choreography sticks mostly to traditional long fist strikes and blocks, with a few opera-style tricks, kicks and flips thrown in.

There are short snippets of the unique venom techniques to distinguish the individual fighters. This occasionally drifts into the realms of fantasy-fu as a fighter slides along the floor, up walls, or flies through the air.

The finale sees the various factions finally come together in a barnstorming barrage of old-school kung fu fighting. There are some great acrobatics thrown in and it’s all performed, as Carl Douglas famously sang, with expert timing.

It’s easy to see why this has become a cult classic, with the period Shaw Brothers studio sets, bright colourful costumes, dodgy dubbing, and spectacular dance-like kung fu fighting. Its energy is captured on film by Chang Cheh with the trademark crash zooms that have been aped by directors like Quentin Tarantino, or spoofed in “Kung Pow: Enter the Fist” and “Wayne’s World”. The English soundtrack has been sampled so often that watching the dubbed version is like listening to an entire Wu Tang Clan album!

The plot is more intriguing than many of its contemporaries, which is part of this film’s appeal, but also its Achilles Heel. Apart from a couple of snippets of action, the middle 70 minutes or so of the film is bereft of any fight scenes.

The enticing cheque written in the first ten minutes of the movie is only just about cashed in the final ten minutes. The fight scenes when they do occur are entertaining enough, but they are very much in the style of the past.

This was at a time when the likes of Jackie Chan with “Snake in the Eagle’s Shadow” and “Drunken Master”, Sammo Hung’s “Iron Fisted Monk” and “Warriors Two”, and Shaw’s own Lau Kar-Leung with “The 36th Chamber of Shaolin”, were revolutionising martial arts movies. It makes me wonder if not for the “cult” status and connection to the world of hip-hop samples, would this film be as popular as it is in the general consciousness of the genre?

It’s not the best-ever kung fu film, but as a template for Chang Cheh’s late-1970’s filmography, its cult status, intriguing premise, contribution to and influence on popular culture, it deserves to be seen by fans of cinematic history. Outside of that, this is one of those films to bung on with a few mates on a Friday night and relive those old “late-night” screenings!

Two of the Venoms encounter each other

The Snake reveals himself 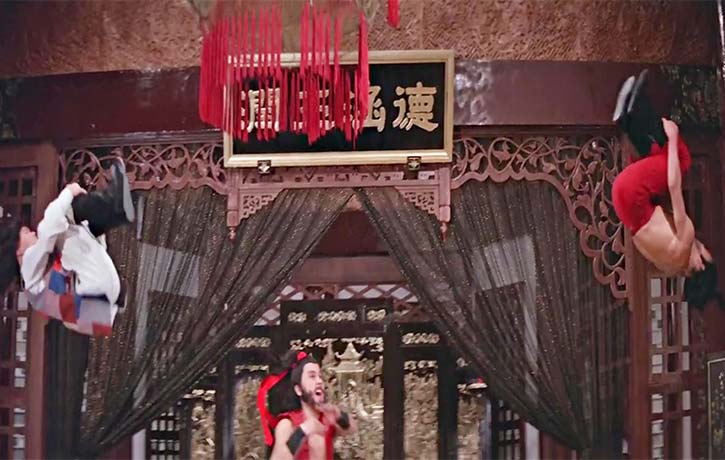 There are some great acrobatics thrown in 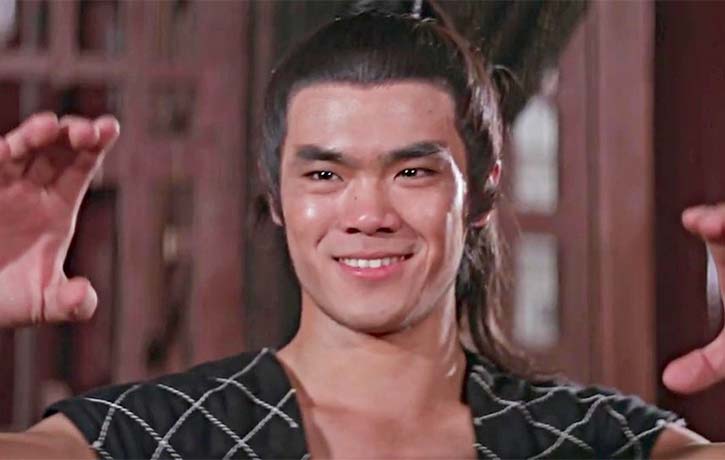 Stop giving it all of that

The Venoms identities are secret

We get to witness the strengths and weaknesses of each style

Feel free to order your DVD copy of “Five Deadly Venoms” from Amazon!

WHAT ARE YOU LIKE: CENTIPEDE, SNAKE, TOAD, LIZARD or SCORPION? PICKED YOUR “POISON”? Now find your antidote in the FUniverse of these Top 10’s, Top 5’s, deep-dive interviews, discover YOUR style in KFK wear and subscribe for more SHAPES of FU on YouTube!