The Russians are coming…in this explosive action extravaganza making its UK debut on Blu-ray! Available from 22nd March 2021 via Eureka Entertainment and Amazon!

World heavyweight kickboxing champion and Tom Hardy look-alike Vladimir Mineev stars as the main MMA raider, “Alexander”. Ilya Antonenko plays the sharp-suited “Sergey Vicktorovitch”, who puts the team together. Nikita Kologrivyy plays a cocky young fighter who is very enthusiastic about taking on all-comers as part of the raid team.

Powerlifting world record holder Kirill Sarychev appears as a goliath of an opponent that stands in the way of the raider’s success. Actress Sofya Ozerova stars as “Eva”, who has her own motives for exposing the board members in the factory.

Nikita, a former Russian Spetsnaz operative, is hired to neutralise the large private security force at a local factory by his shady employer. But Nikita and his group of highly trained fighters get more than they bargained for when it turns out the factory is actually owned by a dangerous warlord connected to the Russian military.

Nikita pits his evasive style against the brute force of MMA

As the hostile takeover begins to unravel, it is revealed that some of the key players have their own personal vendettas to settle.

The tone of the action is established very quickly with a no-nonsense, brawl that errs on the realistic side of screen-fighting. Following a flashback to a stylish, sniper shootout, we get our first proper look at Ivan Kotik as Nikita.

Eva has her own motives

The introduction of melee and bladed weapons up the ante

He is certainly in good shape and demonstrates some impressive workout skills that include Russian dancing, pressing in handstand, and iron-qiqong style arm and hand conditioning. It’s not unlike a training scene from a 1970’s kung-fu flick.

Once the raid commences, the action is dominated by MMA-style striking and grappling. It’s all filmed very stylishly, albeit a little like a music video. All the hits certainly look full contact!

When Nikita encounters a canteen full of bodyguards, he employs a softer but effective almost Tai Chi style of hand-to-hand combat. Nikita’s ragtag band of shaven-haired fighters love to fight and are constantly looking for the next set of victims to practice their skills on.

The raiders love to fight

They absolutely delight in giving everyone who crosses their path a good kicking! Not everyone is a pushover however, and there is an entertaining take on the classic “David vs Goliath” set-up that features the powerlifting world record holder Kirill Sarychev.

The introduction of melee and bladed weapons up the ante as the unarmed MMA hooligans fight their way along a corridor. A highlight is when Nikita pits his evasive, redirecting style against the brute force of the MMA fighters. It’s here that we start to see how his Russian dancing skills helped him to become such a potent martial artist.

Sergey will use any means necessary to get the deal done 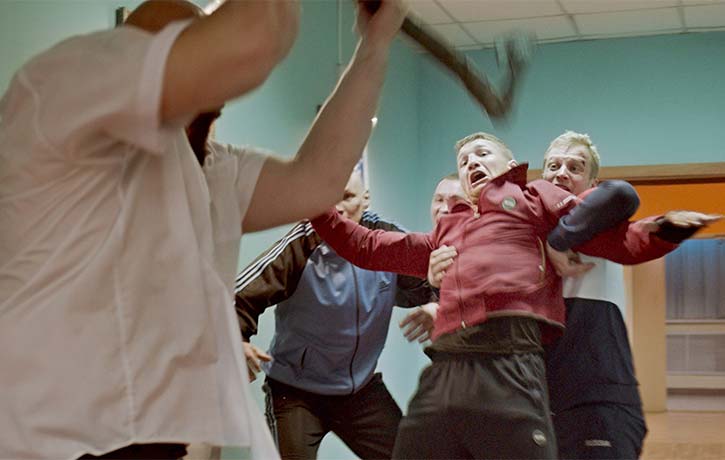 Absolutely packed to the brim with fights and action

Just as the bladed weapons took things up a notch, the introduction of firearms raises the bar a few levels. Although composed of a mix of digital and practical effects, the previous bruising encounters are replaced with headshot kills and blood-spatter. For the film’s finale Nikita becomes a cross between Under Siege’s Steven Seagal, John Wick and Rambo. The tension builds nicely with the action presented using authentic tactical techniques, and occasional cool, showy flourishes dropped in.

I had not heard of this film and it came as a pleasant surprise watching it. It is absolutely packed to the brim with fights and action!

The dangerous warlord is connected to the Russian military

Although the fight scenes are violent, hard-hitting, and get bloody in the last act, they are nowhere near as graphic as “The Raid”, or even something like “John Wick” for that matter. They are very well put together though, filmed with a glossy style, and peppered with little amusing spots of humour, which I was not expecting!

I’ve seen a lot of low-budget action films that feature some obviously talented physical performers, but they look like they are “playing” at fight choreography that’s been recorded by some first- year film students.

Although there are some flashy moves on display here, the screen fights, to their credit, avoid anything too acrobatic, eschewing jumping, somersaulting, and spinning kicks with nothing more extravagant than superman punches and flying arm-bars.

The ragtag band love to fight

Putting the rather unimaginative title to one side, “Russian Raid” is a slick, pulse-pounding, non-stop action film, that does for MMA what “The Raid” did for Silat! If you enjoy films like “Headshot”, “Re:Born”, “The Night Comes for Us”, or indeed “The Raid”, you will love this!

The tables are turned

Nikita is a former Spetsnaz operative

RUSSIAN RAID is out on Blu-ray and digital formats from 22NDMARCH 2021 and you can pre-order your copy from Eureka Entertainment, or Amazon!

SO YOU’VE ‘DEALT’ WITH THE RUSSIAN RAID & INDONESIAN RAID…NOW RAID THE FUniverse…of these Top 10’s, Top 5’s, exclusive interviews, the KFK STORE FOR ALL KINDS OF GEAR, and subscribe for more INTERNATIONAL FU encounters on YouTube!