Any true Jackie Chan fan should see this film, not only because it’s early, raw, prime Jackie, it is also a situation action-comedy. First off, the fights scenes are all very good and you will laugh out loud in various parts of the film. “The Young Master” (1980) was the second ever feature film which starred and was directed by Jackie himself, after the fantastic opening directorial hit, “The Fearless Hyena” (1979). Along with the brilliant Yuen Woo-ping directed action-comedy classics “Snake in the Eagle’s Shadow” (1978) and “Drunken Master” (1978), the Cantonese action-comedy film “The Young Master” continued to establish Chan as a huge martial arts box office star. It was the first Jackie Chan/Golden Harvest film. It was another very early Jackie film (he was 26 years old) which not only showcased his spectacular physical kung-fu prowess, but also his improving experimental slap-stick comedy gifts (see the fan and workbench fight scenes).

There are many familiar faces in this film. In this Chinese period piece, Jackie Chan starred as the endearing cocky, fan-waving, wisecracking, cross-dressing fighting hero, “Dragon”. The villain “Master Kam” was played by a suitably vicious Hwang In-Shik, who also appeared very briefly in the Bruce Lee/Golden Harvest martial arts action vehicle “Way of The Dragon” (1972). In “The Young Master” kicking legend, Hwang In-Shik probably had one of the best bad guy entrances in martial arts movie history (the music was also fantastic!). Tien Feng played the borderline sadistic master of Jackie’s martial arts school (perfect casting), who seemed angry in every scene he was in. The good old tough local police chief Sang Kung was played brilliantly stuffy by a perfectly cast Shih Kien, who also infamously played the main bad guy Han, in Bruce Lee’s “Enter the Dragon” (1973). Lily Li was very impressive as Sang Kung’s attractive fighting daughter and possible love interest for Jackie. She never played the victim and was hard as nails. She has a memorable fight scene with Jackie where she uses her skirt (which Jackie later copies in the film). Ex-Bruce Lee stunt double, Yuen Biao (who is too cool to ignore) played the confident son of Sang Kung, whose amazing workbench and pole fight scene with Jackie is amongst the most memorable in martial arts films for its near impeccable timing which still stands up well today!

Two rival martial arts schools go head to head in an annual Lion Dance competition (beautifully shot and acrobatically performed) for prize money. The star pupil named “Tiger” played by Wei Pei, betrays his school (by feigning injury) which led to his adolescent brother “Dragon” played by Jackie Chan replacing him in the combative contest, but the rivals ultimately win the event. Dragon begins to realize that his brother faked the whole thing to secretly defect to the rival school in the contest. Tiger is soon exiled for his behaviour by the master of the school, played by Teng Feng, and joins a violent gang. Dragon however wants to bring his brother home so his brother can make amends and be forgiven for his treachery. His master gives Dragon the opportunity. In his long search for his brother he is chased and has fisticuffs with the local police, led by police chief Sang Kung (played by Shih Kien) because of mistaken identity. He has been mistaken for a criminal named “The White Fan” (Dragon also carried a white fan), who is actually his own brother, who has gone on to free a violent criminal known as “Kam” played sinisterly by Hwang In-Shik, from imprisonment. However when Dragon goes on a mission to clear his own name, getting into many scrapes along the way, his brother is then framed for bank robbery by the gang and a murder he never committed. So Dragon tries to clear his brother’s name by apprehending the dangerous Kam and his cronies in a battle of attrition which will end in a brutal one-on-one meeting between Dragon and Kam. 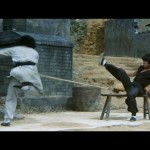 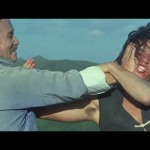 Kam has the upper hand…

Jackie was insane in this scene!

Many fight scenes were original and are still fun and sublime, even though it’s 33 years old!! The martial arts fight scenes are almost certainly better than what Hollywood is churning out these days. Some scenes Jackie performed seemed to have been inspired by Hollywood silent comedy greats like Harold Lloyd (the wall climbing scene for example) or Buster Keaton. Some of the high points in the film are the use of props like everyday items, e.g. a rope, a pipe and a workbench that Jackie uses as weapons. Jackie even uses a wooden Dragon head to fight with in one of the scenes. The Lion Dance spectacle in the opener was intriguing and well performed and it really works. The fan (yes, an actual fan) fight about half an hour into it at the martial arts school between Jackie and a tubby fellow is probably worth the DVD price alone, highly recommended watching for any kung-fu fan or anyone for that matter! It is hard to describe in any way but genius choreography work and some great lines from Jackie like, “Hey fatty, I’d thought you’d bounce back up.”!

The early fights have lots of choreographed set pieces, including a hugely entertaining sword fight with Jackie and a bunch of “Keystone Cops” police swordsmen in a Buddhist temple which is filled with slapstick humour. The police captain with the cross-eyes was funny as hell! Hwang In-Shik’s escape from imprisonment deserves a mention, because it was…awesome! He took on the whole law on his own, with great dramatic music, Shaw Brothers inspired crash zoom-in close ups and great stunt work. It was a great showcase of his fighting prowess and speed. These were Hwang In-Shik’s biggest scenes in the film and he steals the show with his bone crunching presence and sweeping. Hwang In-Shik demoed a wide range of skills, with excellent use of jumping and spinning kicks. The workbench battle between Jackie and Yuen Biao is legendary and highly inventive, especially when it goes into workbench v pole. The humour works very well and it was engaging too! The two are great friends and old work colleagues in real life and it shows. The brief light-hearted fight scene between Jackie Chan and Lily Li who played the daughter of the police chief was enjoyable. She uses her skirt as a deceiving weapon against Dragon and made him look silly when kicking him with footwork.

This bench ain’t big enough for the both of us…

The Lion Dance scene was brilliantly shot and choreographed…

The stunning epic climax battle on a hill top involving the Jackie’s character “Dragon” and Hwang In-Shik as “Kam” is one of the most brutally choreographed, hilariously funny mano a mano battles in living memory, which was arguably more memorable than the classic “Drunken Master” finale because it was so much longer and that much more gruelling. It has to be seen to be believed! In-Shik’s Korean Hapkido fighting techniques from close range were impressive, where you saw many examples of joint locking and throws and double kicks. His “Su do” (edge of hand) was used multiple times impressively. The fight lasts some 15-20 minutes and was shot with a Sergio Leone type wide camera lens. Our hero, Dragon, takes a heck of a beating landing only a couple of punches in the process, all his skills went out the window as he was trying to survive a taunting Kam while looking like a lost puppy. Kam’s kicking and blocking techniques were as unpredictable as his fighting style was brutal against a seemingly outgunned Dragon. Kam threw blurring punching combinations. Watch when Kam gets Dragon into a hyper flexing wristlock, of which he showed a wide variety. By the end, a battered and bruised Jackie Chan hilariously after drinking the opium water probably reminded you of a more OTT Jack Nicholson in the horror movie, “The Shining” (1980)! It was a joy to watch when Jackie became this wild creature unable to feel any pain just walking headlong into kicks and punches and elbows. It was vintage Jackie as he absorbed more punishment than you have seen before or since. Dragon seemed to have no match for the speed of the left foot that the intimidating Kam possessed. Dragon had to use many unorthodox kung-fu styles (like running head first into Kam’s stomach) to overcome his deadly opponent. He took so many round-house kicks to the body and skull it was scary, a bit sadist (maybe?), but fun to watch!

“The Young Master” became the biggest box office smash Hong Kong had ever seen in 1980. It was estimated to have made a handsome $11,026,283 in the Hong Kong Box Office. It is still one of Jackie Chan’s most memorable films, an all out classic and the action was beautifully choreographed with a wonderful supporting cast to boot. It was an important movie because it was Jackie’s second stab at directing after the hit that was “The Fearless Hyena”, so he had to try and top it. It was also his first Golden Harvest studio film. When he could have easily rehashed his Freddy Wong routine from “Drunken Master” Jackie Chan pleasantly went another direction in this effort, his character “Dragon” seems like a superbly good fighter throughout (despite the early part of the film where he was an incompetent student) with no real need for long training scenes unlike previous films. So people expecting another Yuen Siu-tien “Sam Seed” or “Beggar So” type character in this story as we saw in “Drunken Master” or “Snake in the Eagle’s Shadow” will be disappointed. However, Jackie’s comedy is bang on. The humour is good and never really overused. As you would expect the fighting sequences were top notch for the time and artistic. Yuen Biao could have had more to do, but he was great in the scenes he had. The same could even be said of Hwang In-Shik as the chief villain, but that doesn’t really hurt the film because of the quality of scenes they were involved in. The idea that bong water from an opium pipe would be the catalyst for his victory was outrageous along with Jackie’s insane acting in that scene. If you are a Hong Kong film fan this is a must see!

Jackie gets swept off his feet…literally!

Jackie does his Oliver Reed thing!