“Kung Pow! Enter the Fist” is a 2002 American parody of seventies Hong Kong martial arts films, telling the tale of a hero portrayed by Steve Oedekerk (who also wrote and directed the feature) rising up to take revenge on the villain who has wronged him. It contains old footage from the 1976 film “Tiger and Crane Fist” but has an unrelated plot.

Steve Oedekerk stars as ‘The Chosen One’, a martial arts expert searching for the person who killed his family as a baby. Oedekerk does a good job as a slightly straighter protagonist compared to the rest of the over-the-top and quirky characters, although he has plenty of wacky scenes too which include an epic battle with a cow -honestly. He also re-dubbed all of the original cast’s voices with cartoonish, humorous vocals, and included his own talking tongue ‘Tonguey’ -yep, this film is a bit out there.

The Chosen One prepares for battle

Just of his many unique fighting styles

This mercenary makes an unsuccessful getaway

The rest of the cast are largely made up of actors and actresses from footage of the original film with new dialogue. The main villain Master Pain (played by Fei Lung) is a particular highlight with probably the funniest lines and voice acting throughout. And technically they’ve done a really good job mixing in new footage and applying it to 70’s film footage with it being hard to tell which is which more often than not.

Beware! His kicks can come from anywhere…

The Chosen One is a born martial arts expert who fends off the man that murdered his family, Master Pain (who later on changes his name to Betty, as you do) as a baby, only to escape and many years later go in search of him to gain retribution. The movie tells the tale of his heroic journey, training and often peculiar battles he has to undertake, along with a tale of love as he falls for an unusual damsel in distress Ling (portrayed by Ling Ling Tse).

The Chosen One never backs down from evil

The fight sequences are if anything, unpredictable. In one scene you’ll have an evil gang trying to murder a kung-fu fighting-baby, and then later on‘The Chosen One’ will be wielding nunchakus made of gophers and literally punching a hole through a man’s chest.

So, if you enjoy some more of the unorthodox on-screen battles, akin to the epics in the Anchorman films then you’ll definitely get a kick out this.

The Chosen One rides in style

There’s a mixture of comedic elements and old Hong Kong action cinema here as they expertly inserted Oedekerk into some of the original encounters, so fans of that old school style have something to appreciate, and hopefully LOL about. There are also plenty of references to other famous films such as “The Matrix” with slow motion moments, the Lion King when The Chosen One gets advice from an animated lion in the sky and even pro wrestling (the cow performs a pile driver just before doing a kip up, much like the now retired WWE pro wrestler Shawn Michaels).

Okay, so while it doesn’t possess action crafted for the martial arts purists out there, it certainly refreshes the parts that other action-comedy movies can’t reach. Even the appearances of the odd villager will have you either scratching your head or laughing out loud with Oedekerk’s voice over work.

Just an example of the wacky humour on display 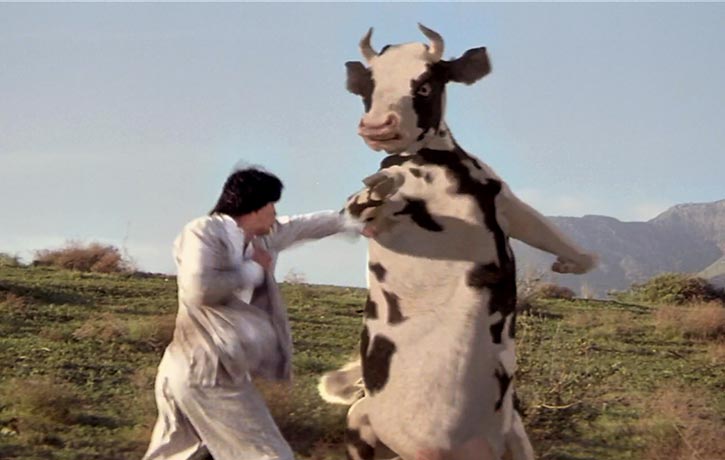 The Chosen One makes his epic journey across the vast land

The rather odd Ling looking on fondly

Theres no holding back here

After revisiting this, it’s clear to see how “Kung Pow! Enter The Fist” gained a cult following over the years with its engaging, colourful style. Chances are it’s unlike any kung fu movie you’ve ever witnessed with a cast of oddball cartoonish characters and a ton of daft lines that will probably continue to be quoted by fans for a long time to come.It’s a well-made, goofy, OTT, ridiculous (in an endearing sort of way) entertainment for martial arts, action and comedy fans. Fancy switching off from the world’s ado to indulge in an hour and twenty-minute giggle? Then give this a try, it works!