A film that has divided film fans and historians, and a bigger hit in Japan than in the west, “The Last Samurai” holds up as a stellar example of Hollywood’s white-man saviour narrative, whilst romanticizing the samurai. Setting aside the criticisms we cast a discerning critical eye over Tom Cruise’s period drama to see how well it captured the essence and spirit of an important turning point in Japan’s history.

Tom Cruise stars as Nathan Algren, a Civil War and Indian Wars veteran haunted by the massacre of Native American civilians at the Washita River who finds redemption and purpose among the last of the samurai fighting to preserve their heritage.

Timothy Spall plays Simon Graham, a British interpreter for Captain Algren and his non-English speaking soldiers. Billy Connolly as Zebulon Gant, plays an ex-soldier who served with and is loyal to Algren, convincing him to travel to Japan and train their Imperial Army. Tony Goldwyn plays Colonel Bagley, Algren’s commanding officer whose role it was to train the Imperial Army.

Hiroyuki Sanada as Ujio showing the poise of Iaido

Katsumoto gives these assassins a lesson in swordplay

The ensemble Japanese cast is led by Ken Watanabe as Lord Katsumoto, a warrior-poet who was once Emperor Meiji’s most trusted teacher, leading the fight to preserve the samurai way. Koyuki Kato plays Taka, Katsumoto’s sister who harbours anger at Algren for killing her husband but comes to respect and fall in love with him. Shin Koyamada takes the role of Katsumoto’s son, Nobutada, Lord of the village that the Samurai are encamped in and who, like his father, befriends Algren.

Hiroyuki Sanada (“The Wolverine”, “47 Ronin”) is cast as Ujio, a fierce samurai loyal to Lord Katsumoto and who, under his orders, teaches Algren the art of Samurai sword fighting. Seizō Fukumoto plays the Silent Samurai, an enigmatic elderly man assigned to follow Algren as he travels through the village.

Masato Harada takes on the role of Mr. Omura, an industrialist and pro-reform politician with a distaste for the old samurai ways, preferring the westernization of Japan whilst making money through his railroads. Nakamura Shichinosuke II takes on the role of the historical figure Emperor Meiji.

Katsumoto and Algren ready for battle

Embittered American civil war veteran, Captain Nathan Algren is hired to train conscripts for the first standing Imperial Army in the use of firearms and modern warfare. When his party is attacked by rebel traditionalists Algren is wounded and captured by their leader Katsumoto. As he is nursed back to health, Algren becomes enamoured with the samurai way and soon joins their cause.

The samurai ride into action

Ujio shows the soldiers how to fight like samurai

The film features two major battles that bookend the story; the first featuring the Samurai raid on the Japanese railroad pitting the ill- prepared Japanese army against Katsumoto’s unrelenting samurai.

It features a mix of phenomenal martial arts displays and authentic military tactics as the samurai emerge out of the forest mist, to lay waste to the untrained army. They are almost like supernatural beings appearing out of nowhere with a force unrelenting and unstoppable leaving the inept Japanese Army, like the terrified slave in “Gladiator”, trembling to their deaths.

Throughout the film Zwick and Powell set up a contrast of action (in- between the political power play) scenes that show both the beauty and poise of Japanese martial arts – Algren’s Kendo training, and a lone Samurai practicing Kyūdō (archery) – as well as its bloody and brutal side. The film’s two assassination scenes are certainly packed with the latter whether it’s the stealthy ninjas storming Katsumoto’s home, or Algren staring down the sharp blades of sword-wielding assassins in Tokyo.

The calm before the storm

Its full tilt on the battlefield

Lets talk about it

The storming of Katsumoto’s compound is brilliantly choreographed pulling in a mix of panic-ridden chaos, with brutal and intense battle scenes in a classic ninja vs samurai skirmish. Arrows and shurikens hurl through the air sending their victims to the ground with force, and steel swords clash with equal skill and ferocity.

Here Ken Watanabe and Hiroyuki Sanada in their athleticism as action performers remind us of the heady days of Toshiro Mifune and Sonny Chiba. The suspense and danger exude off the screen in this scene to the point where you can viscerally chew the tension. It is helped with Cruise also getting in on the action, showing off his sword and jiu-jitsu skills with fear and urgency as he tests his recently learned skills.

Algren’s ambush in Tokyo is a stylishly shot and fairly bloody sequence which pulls off that most masterly of cinematic techniques (seen in “Sherlock Holmes” and “Never Back Down 3”) giving the viewer a glimpse into Algren’s mind as he maps out the scenario in his head before executing his very deadly blend of slice and dice.

How does Tom Cruise’s Action Hold Up 17 Years on…?

When the scene is replayed in slo-mo we can see numerous intricate sword strikes working in some bone-breaking judo and jiu-jitsu with Cruise performing them all with the ease of a life long budo-ka. These action scenes interspersed with the film’s historical inspirations and political power plays build up the tension to its inevitable, tragic finale.

For the final charge as Algren and Katsumoto face down Omura and Bagley’s imperial guard, Zwick and Powell put together an emotionally intense battle.

The futility of Katsumoto’s samurai, calling on all their warrior skills against the heavy arsenal of the modern army comes across as symbolic of not just fighting on a battlefield. As Algren, wounded and bullet-ridden falls, the look of anguish on his face as he watches his comrade-in-arms hit the field almost symbolises his witnessing the fall of the samurai way.

It culminates in a moving and powerful scene between Katsumoto and Algren showcasing the power and versatility of both actors, leaving more than a small lump in one’s throat.

Once again ‘East meets West in Hollywood’, a clash of cultures ending with mutual respect and redemption played over and over in action films throughout many decades in films such as “The Yakuza”, “The Challenge” and even “Black Rain”. “The Last Samurai” however carries with it a certain sadness, evoking similar sentiments to “The Last of the Mohicans” in that we too are witnessing the end of an age with a heavy heart.

Whilst certain aspects have been ‘Hollywood-ized’ there is still much to take from a film that even Kurosawa would give a thumbs up. Notably the emotional intensity of the battle scenes, and the painful story of a man devoid of hope who finds it in the most unlikely of places. Tom Cruise’s performance is a welcome return to his more heavyweight turns in films such as “Born on the Fourth of July” and he certainly pulls no thespian punches.

The action is gritty and authentic with plenty of clashing steel on the battlefield, and various skirmishes, but it is without doubt the powerhouse performance of Ken Watanabe whose deep and powerful presence has made the first world star from Japan since Toshiro Mifune.

Along with Hiroyuki Sanada, the Japanese cast dominates in every respect as the real stars in their very own story. “The Last Samurai” is a stirring story of redemption and preservation of a way of life packed with indelibly memorable performances, stunning cinematography and fights that thrust palpable emotions that you can almost feel in your own chest.

With a powerful music score courtesy of Hans Zimmer, this is a film deserving of the moniker epic. 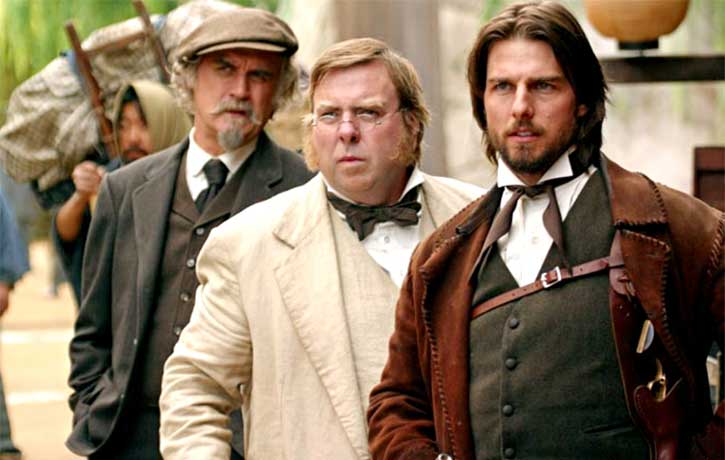 Finding yourself in the least likely of places

Katsumoto asks for one last favour

The imperial army bring out the big guns

Too close for comfort

The samurai take a frenzied fight to their enemy

You can watch this title on Amazon Prime or of course, on Blu-ray!

What did you think of “The Last Samurai” from some 17 years back, should this Japanese samurai theme be revisited, perhaps get a reboot or do you think it would be a tough act to trump? Let us know in the comments below; Like, share and join in the conversation on Facebook and follow us on Twitter & Instagram.

WHETHER YOU SHALL BE THE FIRST OR THE LAST SAMURAI (OR NINJA) WARRIOR…slice into the FUniverse of news, Top 5’s, Top 10’s, deep-dive interviews, get your FU ON, KFK-style and subscribe for more sword-swinging Ninjarama fight action on YouTube!