“The Legend of Bruce Lee” is a biography of the most famous martial artist released less than a year after his death.

It covers many aspects of a traditional biography from early age and family, through to Bruce’s success and rise to superstardom and finally his sudden and unexpected demise. What separates this from a number of other books on Bruce Lee is the amount of information pulled from many sources making it a fascinating snapshot covering the time frame closely following Bruce’s death, where there were lots of unverified theories floating around.

While this has been out of print for many years, it’s easy enough to locate a copy at the larger online retailers.

The book is a relatively small A5 paperback, and 14mm thick. A picture of Bruce in action taken from his films, features on the front cover. 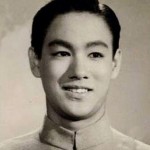 Bruce at 14 years old in his school uniform Hong Kong

Bruce as a boy in an early Cantonese film

The book starts with a contents page and then moves swiftly into the story of Bruce Lee’s life. It flows along usual lines starting with his birth, charting his growth and fame until the summer of 1973.

What this book does differently to a number of others is talk about the myriad of stories surrounding him and his death. It’s an amazing sketch of the early 1970’s, where many rumours and conspiracies about Bruce’s life and death were believed. There is so much information packed into this little book; from rumours that a tribe in Malaysia thought Bruce Lee was still alive in 1974, to how he made many enemies on his path to fame, all the way to how it could be that Bruce Lee had made the gods jealous and how they may have been involved and ‘who might have stolen his thunder back’.

At times some of the stories read as if you were reading them directly from a tabloid newspaper, over- sensationalized yes, yet simultaneously gripping to read.

The book has some stories about religion, the Shaw brothers and their studio, ninjas, how Bruce interacted with people, the history of China and in the middle of the book, some interesting pictures of Bruce Lee with people and places connected to him.

It’s worth pointing out that some fans may get a little frustrated at some of the misuse of martial arts’ terminology, as well as the scattergun approach of some of the stories. This is due to the fact that the author has acknowledged that he wasn’t a martial artist and since its publication in 1974 has stated that the book was written in a matter of weeks at a when people didn’t really know what was going on.

The book closes with a warning about martial arts’ scams, unqualified senseis and sifus (teachers) and doing your homework before joining any club – this is sound advice that still rings true today.

I found this book hard to put down once I started reading it. It is truly a compelling read. We must remember that in 1974 it was difficult to qualify some of this information, so various stories carried weight whilst others didn’t. Many years later with help of hindsight (and the internet) we can easily dismiss a number of these stories but for me, that is not what this book is about. I enjoyed the author’s writing style and overlooked inaccuracies as the stories were, and still are so interesting.

The bibliography at the back of the book mentions many book and article sources that helped the author compose this and can be read almost as a collection of tabloid fables about the incredible force of nature that was Bruce Lee.

I enjoyed it immensely and would recommend it to all Kung Fu Kingdom readers. Please retain a healthy sense of inquiry while reading the stories in this book since not all are as tenable today as they were in back in 1974.