You may have seen him discussing current events on RT America’s “Watching the Hawks”, or appear in one of his father Oliver’s directorial outings like “JFK”, “Natural Born Killers”, or “W.” Whatever the case, the mark that Sean Stone has made on the entertainment industry is set to get a huge dose of both comedy and action in Sean’s upcoming film “Fury of the Fist and the Golden Fleece”.

A spoof of 80’s action heroics and martial arts movie tropes, Sean plays the titular martial arts master known as ‘The Fist’, and is joined in the film by a murder’s row of both martial arts movie vets like Michael Dudikoff,  Don “The Dragon” Wilson, Cynthia Rothrock, and up-and-comers like Bianca Van Damme and R. Marcos Taylor to name but a few.

Today, Sean sits down with KFK to share a behind-the-scenes look at the origins of “Fury of the Fist”, along with stories about making the film alongside director Alex Wraith and its ensemble cast, even including where The Fist might be returning in the future!

Hi Sean, thank you so much for the opportunity to speak today. Hope you’re doing well?

Hi Brad, I’m doing great, thanks. Happy to be here!

Awesome! Well, let’s go ahead and kick off with how you first became involved with “Fury of the Fist”?

Well, I met the director, Alex Wraith, in 2009, and at the time we were working on “Greystone Park”. Through the course of hanging out with him, one day he just walked up to me and said, “Hey, you’re The Fist!”, and of course, I said, “What’s The Fist?”, and he proceeded to tell me about the concept he had for The Fist as an 80’s action-hero spoof. After a while, I started to really like the idea, because I grew up on the Jean-Claude Van Damme and Arnold Schwarzenegger movie era, so I started writing the first draft of the script with Alex back in 2010, and just kept at it from there.

Sounds like you’ve been “Fury of the Fist” for some time. So, have you previously practiced martial arts yourself, if so, since when and which styles?

Alex is the real martial artist out of the two of us! I had done some boxing and kickboxing as a kid, and was a little familiar with Jiu-Jitsu, but didn’t really go into the film as a seasoned martial artist. I was really drawn to the role of The Fist because of his physicality, and the fact that he doesn’t feel the need to use weapons, because his body is his weapon.

Well said. On that note, what would you say are some of your favorite martial arts movies and fight scenes that really stand out for you?

Jean-Claude Van Damme was probably my favorite action hero as a kid, so I enjoyed almost everything he did. I really loved the whole ending of “Timecop” when Van Damme comes back from the future to save his wife. I also love Bruce Lee movies, as well, and the fights in the Japanese dojo in “Fist of Fury” and the Hall of Mirrors in “Enter the Dragon” are some of my all-time faves. I also loved “The Street Fighter” movies with Sonny Chiba, and I really dug that fight scene against opponents while he’s working out in the gym.

A tense scene from Fury of the Fist

Indeed Sonny Chiba’s a legend. So, in addition to appearing in “Fury of the Fist”, you also co-wrote the film with director Alexander Wraith. What can you share about the process of scripting the film with Mr. Wraith?

Well, in putting together “Fury of the Fist”, we really drew a lot from Sonny Chiba. Many scenes were a direct homage to his movies, for example “Samurai Cop” and “Enter the Ninja”, such as when they’d throw dummies out of windows and off of buildings, and they were clearly dummies. So we had a lot of scenes where we’d crush dummies or throw them out of windows, and made sure you could tell what they were, because we wanted the audience to laugh.

The script also evolved a lot over time, and I was basically writing the story while Alex wrote a lot of the one-liners that homaged the 80’s. The story also evolved when Bianca Van Damme joined the film, because we didn’t really have a female element before that. It was more like a video game of guys fighting through different bosses to get to the next one, but when Bianca came on, we made her character, Ana Conda into more of a wild card, where you’re not sure if she’s good or bad.

Well, speaking of that, what stories occurred behind the scenes during the making of “Fury of the Fist”?  Did you experience any mishaps?

Well, I was actually sick as a dog, and we shot the movie in seventeen days, so it was a tough shoot for me. At one point, I had to fight naked in the warehouse battle, which would’ve been hard enough by itself, but I was doing it while I had a stomach flu! But we didn’t have any injuries or mishaps, which was really fortunate.

We also got locked in the warehouse set, because we were shooting at night. I guess the security guys thought it would be a dangerous set with us shooting all night in the middle of Compton. I thought, “How could this be a dangerous set? We’ve got Alex, Chuck Zito, Don Frye, Bill Goldberg, Taimak, the toughest guys in L.A. right here!”  (Both laugh)

In good company! On that very topic, “Fury of the Fist” boasts a massive ensemble cast including of course Bianca Van Damme, Bill Goldberg, Michael Dudikoff, Ernie Reyes Jr., “Judo” Gene LeBell, Taimak, Danny Trejo, and many others. What can you share about the experience, making the film among so many fighting greats?

It was awesome having so many people come out to play! We were really lucky because a lot of people, we simply called up whilst we were shooting asking them if they wanted to come aboard for this or that part, and so many did just out of passion for the film. It was also really great to have a lot of people in the film who hadn’t really been in the spotlight for a while, but had done a lot of work in the martial arts genre in the past, so it was fun to put the spotlight back on them with “Fury of the Fist”. 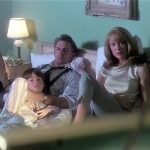 Sean Stone as a child in the 1991 biopic JFK

Are ready to be Seans guest on Buzzsaw

Sean is ready for the next scene

Sean during an interview on The Young Turks

Well, the cast certainly provide a real blast from the past! So, how would you compare the experience of making “Fury of the Fist” with other films you’ve done, such as those you’ve done with your father, Oliver Stone?

(Laughs) Well, you can’t compare making “Fury of the Fist” with something like “JFK”, because it’s far more micro in terms of scale and budget. Also, a lot of things that would be considered mishaps or mistakes on a bigger movie we kind of embraced a lot more on “Fury of the Fist”, because it just plays into the humor of what the film is doing.

Definitely! So, as we prepare to sign off, what other projects do you have in the works following the release of “Fury of the Fist”?

Well, Alex and I wrote a sequel to “Fury of the Fist” while we were writing the first film, so hopefully, we can get that going. It’s set in modern-day, and I think it’d actually be a lot more interesting with the world we’re living in now, and how The Fist would react to it. (Both laugh) I also have a few other projects as director in the works, as well.

Sounds fantastic. Thanks a lot, a privilege of speaking with you on “Fury of the Fist” today, Sean. We look forward to everything you have coming up in the future too!

Thanks Brad. My pleasure to share a glimpse on the making of “Fury of the Fist” with Kung Fu Kingdom!

“Fury of the Fist and the Golden Fleece” is set to unleash on May 25th.
What’s the funniest kung fu comedy fight scene in your opinion? Let us know in the comments below, join in the conversation, share this on Facebook and follow us on Twitter. (Check out our other interviews and stay tuned as we may have a few surprise guests dropping by!)

New Poster and Images for Mile 22!