Don Frye is a veteran of MMA like few others in the history of the sport. His career spans all the way back to the stone age of The Octagon, when the UFC was first getting off the ground in the early 90’s. Don would later compete in other MMA organizations, including Pride, K-1, and King of the Cage – and that’s all just one side of his long career in the ring.

Never one to rest on his laurels, Don would also go on to compete in the world of professional wrestling, and would later step into the film industry as well, appearing in films like “Public Enemies”, “Noah”, and “Godzilla: Final Wars”. His latest appearance in front of the camera will be in Sean Stone and Alexander Wraith‘s upcoming martial arts comedy spoof “Fury of the Fist and the Golden Fleece”, alongside fellow legends of martial arts and pro-wrestling, Michael Dudikoff, Bill Goldberg, Cynthia Rothrock, and Don “The Dragon” Wilson!

Today, Don sits down with KFK to share a peak behind-the-scenes of “Fury of the Fist”, along with a trip down memory lane to his careers in both pro-wrestling, and fighting professionally at the very dawn of MMA as we know it!

Well, let’s kick off with how you first got started in the martial arts; what age were you and what different arts have you studied and trained?

Well, my father was in the Air Force, and while we were stationed at Langley Air Force Base in Virginia, he took me to a judo class when I was in about second or third grade, so I started out in judo. When I got a little older, I started amateur boxing, and later got into wrestling.

So, who would you credit as having most influenced you in martial arts?

My father would be a big one, also my wrestling coach, Manny Martinez, would be another. I have a lot of respect for many of the greats of boxing, like Joe Frazier, Rocky Marciano, and George Foreman, and definitely, Bruce Lee and Chuck Norris.

Excellent! You’re also well-known known as one of the pioneers of MMA. What can you share about your fighting career in the early days of the UFC? Who would you consider your toughest opponents in your professional fighting career?

I thought the concept of the UFC was great, because it was bringing every different discipline of martial arts into the cage without many restrictions, so fighters could just step in there and let it fly. As far as my toughest opponents, I’d have to include Mark Coleman, he beat the hell out of me! Amaury Bitetti was another really tough opponent, I fought him at UFC 9. I also fought Brian Johnston at UFC 10, and he hit me so hard, that was maybe the only time I’ve ever thought about quitting!

Those heavy hitters sure tested you! Looking ahead, you also competed in the world of pro-wrestling. How did you get started in that arena?

It really came from the fact that I just grew up watching pro-wrestling, and I’d always wanted to have a world championship belt! (Laughs) I gravitated toward it because I’d already been in boxing and MMA, and I just wanted to follow in the footsteps of a lot of the pro-wrestlers I grew up watching like Ric Flair, Steve Regal, and Bruno Sammartino.

Some of the all-time greats! So, what would you consider your personal favourite bout in your pro-wrestling career? What were some of your favourite finishing or signature moves?

I think my personal favourite overall was Antonio Inoki’s retirement match. We sold out a 30,000 seat arena for that fight, and sold 5,000 standing seats on top of that! As far as my favourite moves, I always liked using armbars and sleeper holds, I was more of a strong-style wrestler than a flashy-style one.

Huge respect on both counts. On to another arena of entertainment, how did you get involved with “Fury of the Fist”?

I was in Ohio making another movie, and it was right after “Rowdy” Roddy Piper had passed away. He was originally going to be in “Fury of the Fist”, and Sean Stone called me asking if I’d be willing to take his place, and I said “Sure”. I had also been very fortunate to meet Roddy Piper and hang out with him a few times sharing stories before his passing. 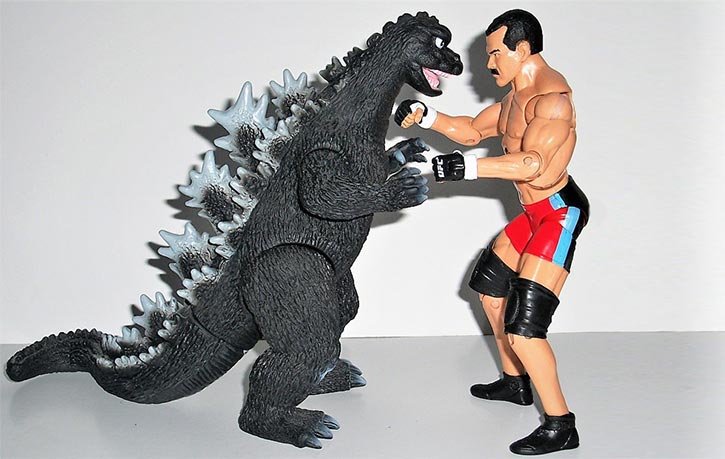 Don faces his toughest opponent of all time

Nice to hear that, Roddy Piper is missed by all of us. So, how was the experience of working on “Fury of the Fist” alongside the huge ensemble cast, including Gene Lebell, Gokor Chivichyan, Danny Trejo, Bill Goldberg, Bianca Van Damme,  R. Marcos Taylor, Taimak, and many others?

Oh man! it was such a blast to make the film with all of them, it really was! Everybody got along so well, like a family. It was a hugely fun experience making “Fury of the Fist”.

No doubt! What were some of the memorable experiences in making the film?

Probably the most memorable part was the fight in the car wash with Bill Goldberg. We improvised a lot of the fight choreography there, and of course, Bill’s always really fun to be around. Also, just getting to meet “Judo” Gene LeBell and running some of our lines with each other was really fun, too.

Gene’s a true legend! On that note, were there any unexpected incidents or mishaps during the making?

There weren’t really any accidents, but my back was hurting through a lot of it. I’d had back surgery to have ten vertebrae fused back in 2013, and was going through a lot of back pain during “Fury of the Fist”. The doctor X-rayed me after I finished the movie and said, “Well, there’s the problem there, dummy, you broke the rod!” So I realized I’d broken the rod before starting the movie, and making the film just exacerbated that back pain. It got to me a lot whilst on set, I even had trouble remembering my lines at times because of it, but nobody ever complained that I was holding up the production, it really was like a family.

Incredible that you didn’t quit, mark of a true warrior! To tie in with that, what’s the most daring stunt you’ve ever done and what’s been your most serious injury and how did you fix it?

Oh heck! I did some stunt driving on another film where I did a really crazy car chase at about seventy five miles per hour, that was probably the biggest stunt I’d ever done. I’ve been really fortunate that I haven’t been injured much while making movies. But, probably the worst injury I’ve ever had was when I broke my neck in pro-wrestling, and that basically led to the surgery mentioned where I had several of my vertebrae fused.

Sounds intense! So, what are perhaps a couple of Don’s all-time fave martial arts or action movies?

Don Frye faces off with Akebono

The Alpha Frye was Big in Japan

Out of the frying pan and into the FRYEr

Frye took on all comers

Don has his own action figure

Agreed. If you could be a superhero, who would you choose and what superpower would you want to have?

I think I’d want to be Superman. Flying, super strength, X-ray vision, he’s got it all!

Totally. Well, as we prepare to sign off, what message would you like to share with Kung Fu Kingdom readers and those who know you around the world right now?

I’d just want to thank them for all of their support over the years, and let them know, “Don Frye’s back on the horse, I’ve got my six-shooters, and I’m coming back over the hill.”

Yeehaw! Thank you so much for your time today, Don, it’s been a real pleasure. Looking forward to what you’ve got coming up, and best of luck with the movie!

Thanks Brad, glad to share this with you here on Kung Fu Kingdom!

Don Frye became a legit king of the ring

Don Fryed them in Pride

“Fury of the Fist and the Golden Fleece” is set to make its grand FU-rore on May 25th. In the meantime, what do you remember Don for the most, what are your fave matches from his hard-as-nails MMA and pro-wrestling careers? Let us know in the comments below, join in the conversation, share this on Facebook and follow us on Twitter. (Get more tough love from our other exclusive interviews!)