At long last, the crossover DC fans have awaited with baited breath is here, and it is glorious! Like no other superhero film this year, “Justice League” is guaranteed to bring out the little kid in you and audiences around the world and lays the groundwork for a sparkling DC Extended Universe!

Ben Affleck reprises his role as billionaire vigilante Bruce Wayne aka Batman, while Gal Gadot also dons her tiara once more as Diana Prince aka Wonder Woman. For “Justice League”, they’re joined by a new cadre of superheroes, including Ezra Miller as geeky college boy Barry Allen aka The Flash, Jason Momoa as Atlantean prince Arthur Curry aka Aquaman, and Ray Fisher as the human-machine hybrid Victor Stone aka Cyborg.

Other alumni from past DC Films return, as well, including Amy Adams as Lois Lane, Diane Lane as Martha Kent, Connie Nielsen as Amazonian Queen Hippolyta, and Jeremy Irons as Bruce’s trusted butler Alfred Pennyworth, while J.K. Simmons steps into the role of Batman’s trusted ally, Gotham City Commissioner James Gordon. Amber Heard also appears in the role of Atlantean princess Mera while Joe Morton portrays Victor’s scientist father Silas Stone, and Ciaran Hinds dons a motion capture suit for the role of the villainous alien warrior Steppenwolf. And, last but most certainly not least, the film features a noteworthy appearance from a certain Kryptonian you may have heard of by the name of Kal-El with Henry Cavill reprising the role.

Batman leaps into the fight

The Flash prepares to zoom into action

Cyborg is one with Batmans tech

Following Superman’s death in battle against the rampaging monster Doomsday, Bruce Wayne and Diana Prince are determined to build an alliance of “metahumans” to defend the world against future attacks. Their mission becomes far more urgent with the arrival on Earth of Steppenwolf, general of the army of the planet Apokolips and its evil overlord, Darkseid.

Steppenwolf had previously been defeated by Amazonian and Atlantean warriors 5,000 years earlier in his quest to retrieve three sources of infinite power known as “Mother Boxes” in order to conquer the Earth with an army of Apokoliptian warriors known as “Parademons”. With Steppenwolf having already stolen the first two Mother Boxes from Themyscira and Atlantis upon his return, Bruce and Diana recruit the metahumans Barry Allen, Arthur Curry, and Victor Stone to stop Steppenwolf from retrieving the third. However, the group soon realizes that they may need to recruit one more member from beyond the grave.

As is always the case with a Zack Snyder-directed comic book adventure, “Justice League” is a true visual feast that, like his prior superhero films, “Watchmen”, “Man of Steel”, and “Batman v Superman: Dawn of Justice“, genuinely looks and feels like a comic book come to life. Nearly any still image from the film looks like it was ripped straight from the pages, or even the cover, of DC Comics and given bright, surreal, three-dimensional life (its telling about how visually stylized Snyder’s filmography is that his foray into zombie lore, 2004’s “Dawn of the Dead”, is the most “normal” looking movie he’s ever made by comparison).

The design of the Parademons, briefly glanced in the “Knightmare” sequence of “Batman v Superman”, is especially impressive – what better way for them to make their live action debut than by giving them literal hornet-like wings? The comic book-esque expressionism of the film’s visual style and cinematography also extends to its overall tone. A common trend seen in modern comic book films and one which DC Films continue to excel at, is giving the film a distinctive genre makeover to have it operate as something external of its genre origins.

The Justice League bands together to save the world 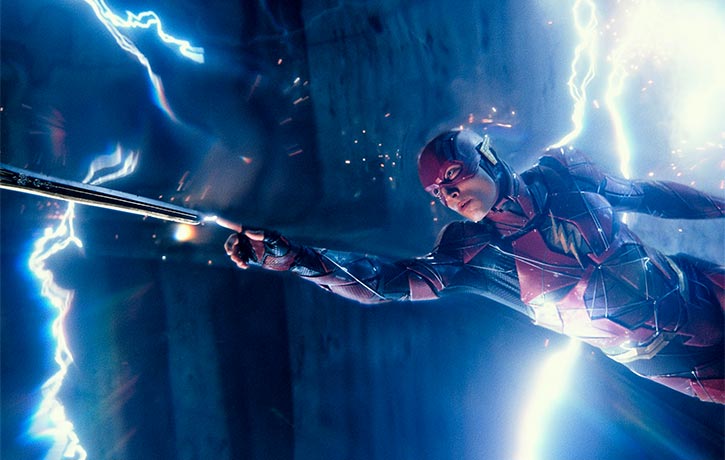 In the case of “Justice League”, it has a distinct feel of a big-budget, live-action version of the “Justice League” animated series, or even one of the DC Animated Films. Indeed, comic book fans will certainly note key similarities to 2014’s “Justice League: War” and 2008’s “Justice League: The New Frontier” (the latter’s Cold War-era setting notwithstanding). In a franchise that has thrived on probing into the political, philosophical and religious themes of superheroes, “Justice League” is a movie for the kid in all of us and for a lifelong DC fanboy who grew up thrilling to the adventures of Michael Keaton’s Dark Knight and Christopher Reeve’s Man of Steel, it awakens that same kind of giddy, hero-worshipping glee that lays in the hearts of all eager to dive head-long into a comic book adventure!

While the golden age of superhero cinema we live in has brought to life the abilities of our heroes of the inked panels more vividly than any of us could have hoped for twenty years ago, it’s time to plant a flag in the sand – no one, but no one, making superhero films today does better action sequences than Zack Snyder!

The League’s first skirmish with Steppenwolf and his legion of Parademons in an underground tunnel also highlights what “Wonder Woman” indicated earlier this summer – namely, that DC has fully embraced the “Blade II” approach to superhero action. Specifically, the actors portraying the spandex-clad heroes execute their fight sequences up to the point of what is humanly possible, with CGI and wire-fu coming in to handle what goes beyond that. Batman, Wonder Woman and Aquaman are all he most adept combatants on the team, and it shows. 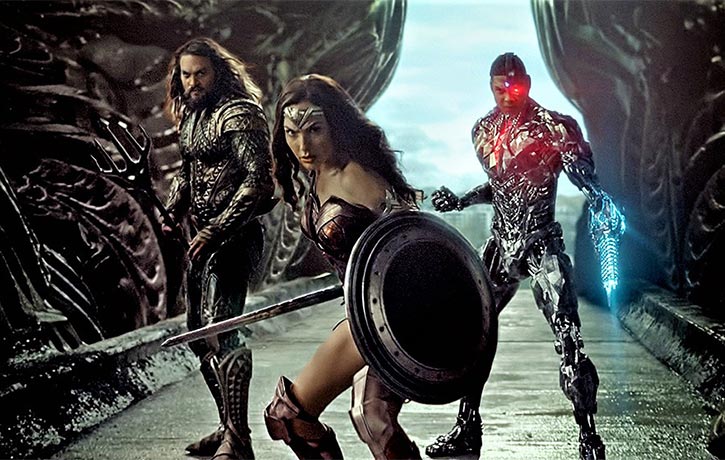 In the case of Aquaman (and after Jason Momoa’s uber-badass performance, I think we can officially call time of death on those asinine “Aquaman is lame” jokes right here, right now), an underwater duel between himself and Steppenwolf provides a solid illustration of how his fighting style is adapted to an underwater setting and will only leave audiences that much more pumped for next year’s “Aquaman” solo film. Wonder Woman’s sword and lasso mastery is just as incredible here as it was in her solo film, and viewers are treated to plenty of her clashing with Steppenwolf’s enormous battle-axe, who more than once finds himself being double-teamed by King Arthur and Princess Diana (see what I did there).

Batman doesn’t have anything quite on the level of the unforgettable warehouse brawl from “Batman v Superman”, but he still breaks out plenty of great martial arts techniques from his expansive arsenal, including in a one-on-one encounter with a Parademon early in the film.

The Justice League is ready to roll

Batman broods over the city skyline

Mera is determined to defend Atlantis

Aquaman in his element on the high seas

Bruce takes Barry under his wing

The Flash and Cyborg are the most CGI-reliant of the group, but their action scenes are still handled in a way that feels naturalistic to the film’s style, to say nothing of the chemistry between Ezra Miller and Ray Fisher, who both turn in some of the best acting in the film. Of course, the elephant in the room is the big cheese himself, and I dare not spoil the details of Superman’s return other than to say it begins with something of a, shall we say, dispute, with the rest of the Justice League that offers up one of the most memorable action sequences this year. Ditto for the film’s sweeping final battle with Steppenwolf and his Parademon army in which each and every member of the league gets their own show-stopping money shot.

“Justice League” is the kind of film that comic book geeks live for. Each of our heroes, particularly Miller and Fisher, are splendid in their roles individually and have terrific chemistry as a group, the film’s visual style and action sequences are never anything less than magnificent, and Jason Momoa simply cannot receive enough praise for killing the myth of Aquaman’s lameness once and for all. The future for the DC Extended Universe looks brighter than ever by the time the end credits roll – especially following two VERY satisfying end credits scenes that will no doubt leave viewers obsessively fantasizing over what’s to come!