Donnie Yen has risen to become one of Hong Kong’s biggest action stars, but if you want to know where it all began or simply fancy a dose of classic kung fu action, you should definitely check out Donnie’s first foray onto big screen action care of: Drunken Tai Chi!

Released in 1984 and directed by the legendary Yuen Woo-Ping – of “Drunken Master” fame and choreographer on “The Matrix” – Drunken Tai Chi is something of a farewell venture to the classical kung fu action films in which tightly choreographed set pieces emphasise each individual move, the kind of films which propelled the likes of Jackie Chan and Sammo Hung to stardom. This film is a long way removed from the kind of raw, brutal action found in Donnie’s modern action thrillers, as is the slapstick humour which features heavily throughout, but the film is nonetheless an exciting and eye-opening showcase of Donnie’s emerging talent!

The basic idea is lifted entirely from Drunken Master (Jackie Chan): the loveable but mischievous son of a powerful man learns responsibility and an unusual kung fu style from a poor old drunk to defeat a ruthless assassin. The comparison is entirely deliberate; this film is attempted to launch Donnie Yen in the same way “Drunken Master” helped launch Jackie Chan. Also, there is no drunken Tai Chi to speak of, the name tries to cash-in on the success of Jackie’s film; Chin Do’s teacher is a surly old drunk but his style is pure Tai Chi. However, what makes this film more than simply another cash-in are the action and precision provided by Donnie and Yuen’s clan.

Donnie plays Chin Do, the spoilt younger son of a salt merchant whose arrogance eventually backfires and helps bring down tragedy on his family. Although Donnie’s actual acting is noticeably raw and he doesn’t have the same flair for physical comedy that Jackie has (but then again, who does?), he can ham it up with the rest of them as the tongue is firmly in cheek throughout. Donnie’s boyish good looks and complete confidence in all action scenes, despite his lack of big screen experience, make him unquestionably well-suited for this lead role.

It’s not called a ‘Yuen clan’ film for nothing: three of Yuen Woo-Ping’s brothers take up other major roles. Yuen Cheung-Yan plays the old drunken puppeteer who takes Chin Do under his wing. Unfortunately the comparisons to the Beggar are unavoidable but not entirely fair. Cheung-Yan, complete with fake teeth and ridiculous hair style takes this stock role and plays up the ridiculous angle of his character who goes from downtrodden street-performer, to domestic slave, to tyrannical husband to martial arts guru and makes it look easy. When the film is genuinely funny, he’s usually the reason, so credit must be given where it’s due!

Yuen Yat-Cho plays Chin Do’s long-suffering older brother Yu Ping. In the brief moments that he gets Yat-Cho brings some genuine warmth to the film and brings out Chin Do’s compassionate side. Yuen Shun-Yi plays Killer Bird, the mute master of ‘external’ or ‘hard’ kung fu and the assassin hired to kill Chin Do’s family. Typical villainous expressions and intensity abound, but Killer Bird’s silent assassin gets a chance to show his softer side too. Hong Kong comedy legend Lydia Shum plays the puppeteer’s wife and in typical odd couple fashion bickers endlessly with her husband but still shows a few interesting moves herself.

Chin Do and Ta Sha are the spoiled sons of local wealthy merchants and comic rivals who open the film showing off and competing with the bikes their fathers bought them from America. Chin Do humiliates Ta Sha and sets him up to be arrested for throwing a rock at a cop. Chin Do returns home to help his older brother who works like a slave for their miserly father. The two practice kung fu and pack salt in the way only kung fu masters can until accidently humiliating their father who dotes on the younger, smarter and more handsome Chin Do.

Whilst running some errands Chin Do runs into a very large woman he can’t help playing a prank on, forcing her to rip her dress. Unfortunately for Chin Do, she’s pretty adept at the soft style of Tai Chi and proceeds to give him a beating in a ridiculous ‘fight’ that involves Chin Do first getting lost in her skirt and squashed under her sizable weight. Having recovered from his ordeal, Chin Do and Yu Ping head out only to be set upon by Ta Sha and his comic thugs who have a series of firework traps laid for them. The brothers’ superior kung fu allow them to turn the tide on Ta Sha and his thugs, but Chin Do accidentally sets-off a dangerous trap leaving the already-dense Ta Sha traumatised and a jibbering wreck.

Killer Bird first shows his stuff by practising his iron hand skills then smashing wood and hammering nails with his arms and heads, in typical ‘hard’ kung fu fashion. Ta Sha’s father hires him to take out Chin Do and his family as revenge for his son’s state, and after breaking into the house and easily dispatching some wandering workers he defeats Yu Ping and sets a blaze that swallows up Chin Do’s miserly father and the vast wealth he sleeps on. Chin Do escapes by spending the evening showing off his skills at a bar where a game resembling arm wrestling with calligraphy brushes gets out of hand, but Chin Do despatches his huge opponent with ease, only to return to the ashes of his former life.

Penniless and without any skills to draw upon, Chin Do wanders and comes to the aid of an old drunk puppeteer he thinks is being beaten up, destroying his stage (and burning his beard!) in the process. The puppeteer takes him home to make him work off his debt but soon discovers the spoilt boy can’t even draw water without making a mess. The puppeteer and his wife soon forgive him and he becomes part of the family until the wife attempts to seduce her husband in a ridiculous scene. When Chin Do accidently disrupts her fertility ritual she chases him out of the house!!

Comedy legend Lydia Shum wants Donnie out of her skirt 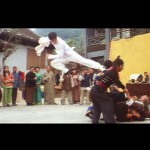 Chin Do thinks hes come to the rescue..

Chin Do reluctantly agrees to work off his debt

Chin Do confronts the man who ordered his familys slaughter

Destitute again, Chin Do spots Killer Bird’s young boy being kidnapped and steps in, giving them a sound thrashing and returning the boy home. Spotted by the assassin, Chin Do is then pursued but even his skills aren’t enough to beat the hard style expert. After hiding in a mangrove swamp, Chin Do is able to get back to the puppeteer and his wife who show him how their ‘soft’ style of Tai Chi can defeat traditional ‘hard’ styles. The puppeteer becomes his Sifu, but this Tai Chi is a serious fighting style in which each of the unusual lessons teaches him to absorb his opponent’s force and use it against him.

Chin Do stumbles upon the ranting Ta Sha and the truth about his family when the puppeteer is hired to put on a show for them. Chin Do dresses up as a puppet and breakdances to help his master show off something new but overhears Ta Sha’s babbling. His new Tai Chi skills make him more than a match for Ta Sha’s father who is accidently killed by his own son. Grief stricken, Chin Do returns home, drinks and waits for Killer Bird and the final showdown. The puppeteer happily sends his protégée off to fight the assassin in a blistering battle that forces Chin Do to use every trick he has learned…!

Although there is some wire work, it is mainly used for the physical comedy within the film. The fight scenes themselves mainly rely on the exceptional, stylised choreography we have come to know Yuen Woo-Ping for and Donnie’s exceptional physical abilities. There are moments when Yuen and his team have included some gimmicks, such as the BMX scene and Donnie as a breakdancing puppet, but whether these appeal to you or not, the fight scenes are action-packed. The first half of the film belongs to Donnie’s kicks and acrobatic stunts, most effectively shown off when a huge karate master challenges him at a contest where they have to use their strength and skills to brush each other with a giant calligraphy pen. Slow motion allows you to see every move of Yen’s modified whip in precise detail and makes it clear the kind of talent he already possesses.

The second half of the film is all about Tai Chi. But this is no sunrise exercise Tai Chi! When Chin Do complains about how slow the style is, the puppeteer kicks up his training a notch and counters every hard move Chin Do throws at him. Chin Na (kung fu joint locking) is brilliantly showcased amongst some of the more unusual training methods and the Yuen clan really pull-off their aim: to show how ‘soft’ styles can counter even the toughest opponent, even Killer Bird’s visceral, Eagle Claw-inspired relentless attacks! The training and action scenes are more comical than some of Yuen’s earlier classics, but these tie-in with the rest of the tone. It’s in the serious fight scenes that the humour is put aside and action takes centre stage…

“Drunken Tai Chi” never lived up to the heights of “Drunken Master” amongst fans or at the box office, but nevertheless it’s a great kung fu showcase in its own right. It’s an unconventional mix, featuring American crazes (skateboarding) and a killer with a very human side alongside a lot of slapstick and bawdy humour, but it’s impossible not be taken in by Donnie and the team’s set pieces. It holds a special place in Hong Kong film history for bringing Donnie Yen to the fore and as one of the last films to feature step-by-step intricate choreography. Definitely check it out if you’re a Donnie Yen/kung-fu and action fan, it’s really bristling with fun!