Yes, the outstanding “Daredevil” Netflix series leaves his 2003 outing in the dust. Yes, the director’s cut is unquestionably the superior version of the film. Yes, whatever your feelings towards the film, just about everyone agrees that the 2005 spinoff “Elektra” is roughly a thousand times worse. With all of that being said, a touch of dissent is in order for the consensus on 2003’s “Daredevil” – specifically, while it is no misunderstood masterpiece, it’s also not the blight on superhero cinema that it’s frequently made out to be.

Ben Affleck steps into the lead and dons the red tights of Matt Murdock aka Daredevil. Himself a fan of the Man Without Fear’s comic book exploits, Affleck turns in a pretty solid performance, while Jennifer Garner portrays our hero’s romantic interest Elektra Natchios, and the late Michael Clarke Duncan brings his massive frame and deep, baritone voice to the role of the villainous Wilson Fisk aka The Kingpin. Channeling Jack Nicholson’s performance as The Joker is Collin Farrell, who gives our hero another formidable opponent in the form of the psychotic assassin Bullseye, while Jon Favreau portrays Matt’s close friend and legal partner Franklin “Foggy” Nelson, and Joe Pantoliano plays investigative journalist Ben Urich, who remains unsure of the Man Without Fear’s activities.

Matt Murdock seems like just your average New York City lawyer, save for the fact that he happens to be blind. What no one else realizes is that the accidental exposure to toxic chemicals that took Matt’s eyesight as a child also enhanced his other senses to superhuman levels, and even transformed his sense of hearing in a radar-like sense that allows him to “see” the world around him.

Matt Murdock has a secret that the world is blind to…

Elektra displays her mastery of the sai

A sinister grin from The Kingpin

By night, Matt uses his super senses and incredible martial arts skills to fight crime in the streets of Hell’s Kitchen as the masked vigilante known as “Daredevil”. However, just as he finds a love interest in the form of Elektra Natchios, the daughter of a wealthy socialite, he also encounters the most fearsome opponents yet in the form of the nefarious crime boss Wilson Fisk, aka The Kingpin, and his ruthless assassin Bullseye, who can turn almost any object into a lethal projectile.

My fellow lovers of the superhero genre can be a perplexing lot to me, sometimes.
It isn’t uncommon to find “Daredevil” on lists of the Worst Superhero Movies of All Time, and while it’s not an outstanding comic book adventure, let’s just back up a moment and look at a few of the other films that frequently appear on such negatively themed lists – “Batman and Robin”, “Superman IV: The Quest for Peace” (how the infinitely worse “Superman 3” keeps avoiding a spot on this list is anyone’s guess!), “Catwoman”, “Steel”, “Supergirl”, “Blade: Trinity”, the aforementioned “Elektra” spin-off, and pretty much every cinematic version of “Fantastic Four”.

We may look back on “Daredevil” as not being as strong a celluloid representation of The Man Without Fear as we would’ve liked, especially compared to the terrific “Daredevil” Netflix series, but does it REALLY deserve to be lumped in the same trash heap as “Batman and Robin” and “Catwoman”? Now, none of that is to say there isn’t plenty to criticize in the film either, but even here, many of the criticisms leveled at the film’s theatrical release are directly remedied in Mark Steven Johnson’s director’s cut. 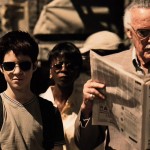 The legendary Stan Lee drops by for a cameo!

The Kingpin looks out over his criminal empire

The chronology of certain scenes in the theatrical version are altered in ways that don’t make sense, but which flow organically in the extended version, and things that are left out in the former are restored in the latter to make the film feel more complete. Case in point – Matt’s line “The word’s out on the Kingpin” in the theatrical version seems to come out of nowhere, but a preceding scene restored in the director’s cut gives it the necessary body and context.

For his part, Ben Affleck does a fine job as Daredevil, and while there’s more CGI put to use in the action sequences than necessary for this particular character, he does a decent job of conveying Matt’s martial arts skills as well, under the action direction of Yuen Cheung-yan, the brother of famed fight choreographer Yuen Woo-ping.

Easily the best action sequence in the film comes fairly early on, when our hero battles a bar full of gangsters in his pursuit of a rapist, cutting back and forth between the raging fight and Matt’s radar sense. In fact, the film’s portrayal of the radar sense is so good that it’s perhaps the one area where the film betters the Netflix series – two seasons in, it would have been nice to see the world through Daredevil’s eyes more than once! Unfortunately, the action in the rest of the film never gets that good, too often morphing into a more Spider-Man-esque version of “Crouching Tiger, Hidden Dragon” and moving away from the clear ninja theme of the comics.

The Man Without Fear leaves his mark

Daredevil looks out over Hell’s Kitchen

Bullseye is called that for a reason!

Hell’s Kitchen has a Guardian Devil

Matt’s final confrontation with The Kingpin, in particular, will probably leave you asking “That’s it?”, even in the slightly longer version in the director’s cut. By far, the weakest link of the film, however, is Elektra, and that’s certainly not the fault of Jennifer Garner. She puts as much blood, sweat, and tears into her role as Affleck, and she can spin a pair of sai with the best of them, but the material she has to work with is paper thin. Instead of being presented as Catwoman to Matt’s Batman as is the case in the source material and the Netflix series, the script interprets her more as a rich girl with a martial arts background who gets in way over her head when the going gets rough. Her best moment in the film is a friendly sparring match between her and Matt that’s largely played for laughs, but the way she’s written in ends up making her the most extraneous element of the film, although still not half as terrible as her portrayal in the “Elektra” spinoff – not to keep beating up on that one.

As you can see, “Daredevil” while not something we’ll look back on as one of the absolute crowning achievements of superhero cinema, lumping it in with the most atrocious garbage the genre has ever produced is seriously shortsighted. It has its faults certainly, in particular the poorly written role for Elektra and the lackluster climax, however a few solid fight sequences, the terrific depiction of Daredevil’s radar sense and some enjoyably loony performances from Duncan (and especially Farrell) make it good enough to check out at least once. In addition, this “Daredevil” has a Stan Lee cameo – ahem…Netflix series, get on that!

Daredevil is well armed for the battle ahead

Daredevil must recover from a punishing throw

The battle between Daredevil and Bullseye intensifies

The Kingpin is a formidable opponent

Acclaimed filmmaker and comic book writer Kevin Smith makes a cameo appearance in the film. Ben Affleck has appeared in several of Smith’s directorial efforts, including “Mallrats”, “Chasing Amy”, “Clerks II”, “Dogma”, and “Jay and Silent Bob Strike Back”. Smith also wrote the 1999 “Daredevil” story arch “Guardian Devil”, for which Affleck wrote a foreword in the story’s collected edition. Numerous story points in the film, such as the image of Daredevil clinging to a large cross atop a Cathedral, are taken directly from “Guardian Devil”.

I am The Greatest: Muhammad Ali at The O2