Following the huge success of the original film, a follow-up was soon put into production. The film is a sequel in name only and features some of the actors from the first film.

The first film had turned wushu athlete Jet Li into a film star and he again takes the lead in the role of “Sanlong/Third Dragon”, the mischievous eldest son.

Real-life Praying Mantis master Yu Hai, plays ” Tianlong/Heaven Dragon”, a former Shaolin monk and “father” to the eight orphan boys. Yu Hai was one of the founding fathers of modern wushu in China. In addition to appearing in the Shaolin Temple films, he has also featured in “Tai Chi Master/Twin Warriors”, “Tai Chi Boxer“, “Shaolin” and “Man of Tai Chi“.

Phoenix is an expert with the Jian Straightsword

Huang Qiuyan is a former member of the Beijing Wushu Team

Jet Li is the cheeky Sanlong

In the late Ming Dynasty, former Shaolin monk Tianlong and his younger brother Yilong, raise eight orphan boys whom they saved from murdering bandits ravaging their home village. The children refer to Tianlong as their father and Yilong as their uncle and are taught Shaolin kung fu by the two.

The Long boys are playful and often bicker and fight with the daughters of the Bao family who live just across the river and practice the Wudang style of martial arts. The Wudang master Bao Sanfeng is desperate for a boy heir but has nine daughters.

Meanwhile, the vicious bandits who orphaned the eight Long boys have been training in secret for ten years to revenge the Shaolin counter-attack which injured them when they looted the village. A cross-eyed member of the bandits poses as a Taoist soothsayer to infiltrate the Baos to learn their martial arts and abduct their daughters. The false priest tries to persuade Bao Sanfeng that the Long’s are to blame for his misfortunes.

When the bandits arrive and the priest’s true colours are exposed, the two families must combine their Shaolin and Wudang skills if they are to defeat their nemesis. 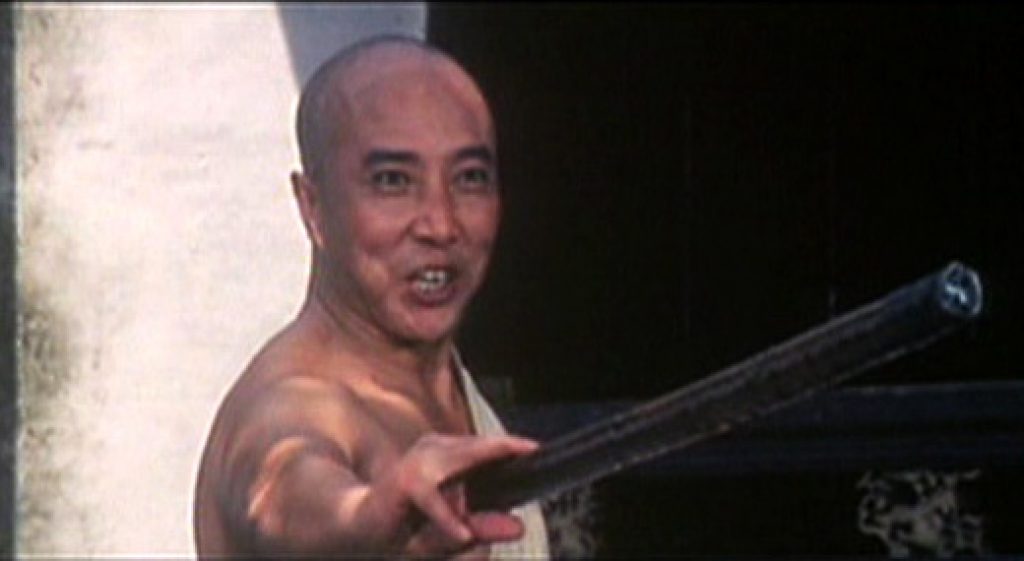 Its a pleasure to see Yu Hai in action 02

After a bit of tomfoolery by the river, the male members of the young cast are seen training. They give an impressive demonstration of Chinese wushu, performing butterfly and whirlwind kicks and aerial cartwheels in time with each other. Jet Li joins them in their training session, hanging upside down from bamboo poles as they do their abdominal exercises.

In a quite brutal flashback Yu Hai recounts defending the village from bandits. Although the choreography here tends to look a bit old fashioned at times and is very “opera-like”, there is still some great fighting with a pole.

When Jet Li’s mischievous character teases third daughter Phoenix, they play to their real life athletic strengths, with Li fighting with the pole and Huang Qiuyan using the straight sword. It’s a pleasure to see the showy wushu movements correctly applied in context.

The junior cast members are no less impressive. When the kids spar by the river, they are as equally adept and acrobatic as the adults, who soon join in with a swift sword versus pole duel. Again there are some beautiful demonstrations of the fighting applications of moves like the butterfly twist.

Next, it’s the girls turn to shine. They are easily the equals of their male counterparts, performing gunshu, snake fist versus duck (!) and Nan Quan (Southern Fist) versus Monkey Boxing.

In an “I’ll show you mine if you show me yours” sequence, Jet Li performs a tournament-style gunshu (cudgel) routine. Not to be outdone, Phoenix demonstrates an equally-skilled wushu-style cudgel routine. 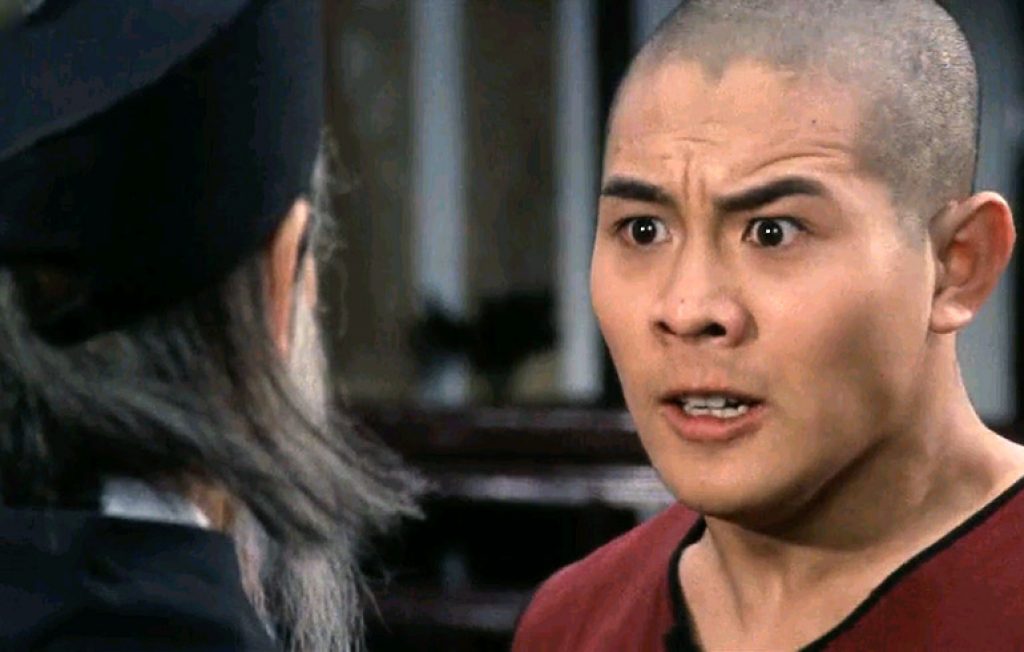 In a slightly different type of action sequence, we get to see a performance of Northern Lion Dance. It takes an incredible amount of skill and training by the performers to be able to balance on large spheres and roll them up and over a seesaw, all whilst dressed as a traditional Chinese lion! When a cudgel-wielding suitor fights for the hand of Phoenix, she leaves him in no doubt as to her level of martial arts skill. She uses some beautiful jianshu moves to apply her straight sword and scabbard in defence of the swinging cudgel attacks, comically slicing open the gusset of his trousers!

Somehow Jet Li always seems to end up in drag in these movies and he doesn’t make an exception here. Dressed as a young girl, Li spies on Yu Chenghui, giving the audience a brief glimpse of his famous real-life long sword skills.

Forced to hideout in some beautiful caves they provide a picturesque backdrop for our romantic couple of Phoenix and Sanlong to practice some sword vs sword techniques. With the arrival of Yu Chenghui, these skills are quickly put to the test in a battle of the straight sword against the long sword. The grace of the duel produces a deadly looking but pretty dance between Yu Chenghui and Jet Li.

When a turban clad kidnapper arrives at the caves, Sanlong and Yilong use the walls and rocks to launch their somersaults and kicks in order to fight the bandit off.

For the 15 minute or so finale, marauders attack Yu Chenghui ‘s residence. He again applies his famous long sword skills. The choreography here feels almost like watching a fight from a Chinese opera. Phoenix makes stunning use of a straight sword in each hand as she fights off multiple foes. Everything moves with speed and grace during the long-take wide shots.

The best thing about this final battle is the versatility of the fighters and the weapons they employ. As Yu Chenghui’s long sword duel spills into the yard he is quickly forced to fight off cross-eyed Sun Jian-Kui ‘s San Jie Gun (Three Sectional Staff), before Jet Li leaps in to the rescue with his cudgel. Our hero ends up in double trouble as two bandits armed with the San Jie Gun attack him, in a smartly-choreographed three-man set.

The kids from Shaolin strut their stuff

Time to split for this suitor

The kids give as good as they get

Meanwhile, Phoenix has to deal with the bald-headed henchmen Ji Chunhua who is armed with a spinning shield and claw mace. Her fight even incorporates some gymnastic beam moves! Luckily Yu Hai and Hu Jianqiang are on hand to fight off the vicious and powerful baldy! Hu Jianqiang performs a great one-take move as he jumps two footed at his opponent’s head, misses, bounces off the wall and lands on his feet to carry on fighting with a spinning kick! He even fires off a jumping triple front kick, Donnie Yen-style. Using authentic applications, Jet Li gets to demonstrate his supreme skill with the San Jie Gun, as well as facing off against the Rope Dart.

The whole finale is worth watching the film for alone. I won’t say how it concludes, but it is an eye-watering final blow!

This sequel wisely retained the original successful format of employing genuine wushu athletes as the main cast. However, this is a much more light-hearted film than its predecessor and plays almost like a kung fu version of “Seven Brides for Seven Brothers”. The stars even randomly burst into singing traditional Chinese songs!

The Chinese countryside and river form a gorgeous backdrop for the film. Unfortunately, this sequel is not as well shot or edited as the original, losing some of that beauty. There is also a huge gap in the middle of the film between any significant action scenes.

The caves provide a picturesque backdrop

Although the choreography is not quite as crisp as in the first film, there is little to no wirework in the fight sequences and just the occasional use of trampettes and reverse filming. For the most part, the martial arts choreography is just like watching performances of individual and two-person wushu routines, rather than “actual fighting”. The fight choreography in the final battle is excellent however and a highlight of the film. As the cheeky “Sanlong”, you can see strong glimpses of Jet Li’s charm that has served him well as he has grown as an actor. Of course physically Li is still very young and incredibly agile in this film.

The martial arts talents of the children are very impressive and I wonder how many of them went on to have careers in Chinese movies. And it’s always a pleasure to watch martial artists like Jet Li and Yu Hai in action, especially when they were physically near their peaks.

If you enjoyed the wushu-style action of the previous movie and are looking for something a little lighter in tone, this is fun, engaging and well-worth a look with an end battle that you don’t want to miss!