Bringing beauty and comic timing to the mix is Canadian-born Chinese actress, Christy Chung, as “Rose”. Chung had previously featured in “The Bride with White Hair 2”, and opposite Jet Li in “Bodyguard from Beijing”.

Darren Shahlavi gets ready to face off

Christy Chung brings some glamour to the proceedings

Billy Chow has fists of iron as well as his legs

Yuen Woo Ping gave British action star Darren Shahlavi a step up in his movie career with a leading role as the villain, “Smith”, a ruthless opium smuggler.

Mark Cheng has a supporting role as a Qing official, Lam Wing.

Wu Jing does a wushu tango

Set in the early 20th Century, the film starts by introducing us to a renowned master of Taijiquan, Yeung Shan-Wu, and his cheeky young son, Jacky. At a celebration to announce his retirement from martial arts, Yeung Shan-Wu is challenged by Wong. Yeung is reluctant to fight, but has no choice but to defend himself against Wong’s impressive kicking skills. Wong eventually concedes defeat but vows that he won’t stop until he one day betters Yeung.

Fast-forward ten years, and we see Jacky as a young man, secretly learning his father’s martial art from manuals when he should be studying. At a lion dance parade, Jacky gets his first glimpse of Rose, and is instantly smitten. Rose objects to the sacrificing of two children, and Jacky leaps into action to protect them. Rose is suitably impressed by Jacky and their friendship begins. Rose and Jacky soon upset a gang of opium smugglers by leading an anti-opium protest.

The ruthless “Mr Smith”, the English head of the opium smugglers, murders Lam Wing, and tries to frame Jacky. When the officials come to arrest Jacky, for the first time in ten years, his father openly uses his martial arts skills so Jacky can escape. Jacky and Rose join the anti-opium protesters, who are planning to destroy Smith’s opium with dynamite.

In the final showdown, Jacky must battle Smith and prove his innocence.

The butterfly kick is a classic wushu technique

Smoking the opium with dynamite

Smith tries choking the chi out of Jacky 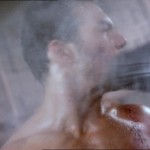 Plenty of things to bounce off in a warehouse 2

By 1996, Yuen Woo Ping was firmly established as the leading choreographer of the “wuxia” genre, kickstarted by 1991’s “Once Upon a Time in China”.

The opening fight pretty much sets the tone for the rest of the film. Casting martial artists in the lead roles, Yuen Woo Ping demonstrates a mixture of genuine physical skill and fantastical wirework in his choreography. Billy Chow shows off his incredible kicking skill as the “Northern King of Kicks”, and the apparently ageless Yu Hai, brings some authentic traditional kung fu moves and postures to the battle. Yu Hai subsequently has some impressive battles with Wu Jing, and numerous Qing soldiers. In the sequence with Wu Jing, there is a subtle nod to Yu Hai’s role in the “Shaolin Temple” films in which they both fight using Praying Mantis kung fu.

Although the film is called “Tai Chi Boxer”, there are only a few tai chi techniques and postures included in the choreography.

When we meet the opium smugglers, Wu Jing fights fellow wushu athlete, Ji Chunhua, who fights in a more “Southern” style, and using his bald “iron-head” technique. Meanwhile, Wu Jing uses his pony-tail hair as a powerful weapon! The fight shows some fairly hefty contact being taken and delivered by both actors, occasionally emphasised with slow-motion photography and the ever-present “power powder”.

Plenty of things to bounce off in a warehouse 1 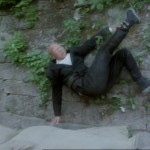 Later, in an impressive “wire-free” sequence, Wu Jing performs his wushu skills whilst dancing a tango with Christy Chung!

The highlight of the film is the final showdown with British action star, Darren Shahlavi. In an early role for Shahlavi, he not only gets to demonstrate some very impressive kicking and boxing skills, but (possibly more importantly) also selling his reactions when taking hits. Shahlavi got himself into peak physical condition for the role, displaying an impressive torso when his shirt is inevitably ripped off, and also a very good range of flexibility.

In a scene reminiscent of the finale from “Once Upon a Time in China”, the final fight takes place in a warehouse with plenty of boxes, sacks and ladders to be used in various entertaining ways. Not surprising really as Yuen Woo Ping choreographed the sequences in both films!

“Tai Chi Boxer” is an often overlooked film of the nineties. When it was released in 1996, Hong Kong moviegoers had started to drift away from the “wuxia” genre, and it was not a financial success.

The plot and storytelling are a little disjointed, and although there is plenty of action, there was little that hadn’t already been seen in other films, many of which had been choreographed by Yuen Woo Ping.

Having said that, if you are a fan of the “Fong Sai Yuk” films, or even the “Once Upon a Time in China” series, the fight scenes are enjoyable. Wu Jing, who is now often cast as a villain, does a good job of playing the “cheeky chap”, and his physical skills would have probably made him the natural successor to Jet Li, had this been a bigger hit.

Darren Shahlavi, through no fault of his own, plays an almost cartoonish British villain, but certainly gets to shine when allowed to display his physical skills.

The supporting cast are adequate, and it’s always great to see Yu Hai in action. Considering the amazing job Yuen Woo Ping did with Billy Chow in 1994’s “Fist of Legend”, it’s a shame he doesn’t get to do more in this film, although he still impresses here.

If you are a fan of the genre and Yuen Woo Ping’s choreography in general, this makes a half-decent ninety-minute diversion!

Even on skates Jacky can still fight

Even a ponytail can be a powerful weapon

Darren Shahlavi got into peak physical condition for the film

Fun Friday - Master Ken opens his doors to the homeless!

Scott Adkins to play for England!