Stu Bennett (aka WWE Superstar Wade Barrett) returns as the no-nonsense, one-man army that is John Gold, to face off against big screen hard man Vinnie Jones, as his nemesis Sean Teague. Released in the USA three weeks ago, “I Am Vengeance: Retaliation” arrives in the UK today, 13th July, from Evolutionary Films, and is directed by Ross Boyask.

Former professional footballer Vinnie Jones, stars as the villain of the piece, “Sean Teague”. With a reputation as one of soccer’s “hard men”, he turned it to good use with his breakout debut role as “Big Chris” in the highly-acclaimed gangster movie “Lock, Stock and Two Smoking Barrels”. He has gone onto play numerous tough-guys in movies such as “Mean Machine”, “Gone in Sixty Seconds” with Nicholas Cage, the Wachowski-directed “Swordfish”, opposite Jason Statham in “Snatch”, Steven Seagal’s “Submerged”, and played “Juggernaut” in “X-Men: The Last Stand”.

Stu Bennett is back as one army John Gold

Former special-forces soldier John Gold, is given the opportunity to bring Sean Teague – the man who betrayed his team on their final mission in Eastern Europe several years ago – to justice.

Gold would cheerfully see Teague dead, but he is convinced to help transport him to a military prison to pay for his crimes. Along the way, Gold will have to fight off Teague’s team who are attempting to extract him, as well as a sniper seemingly hell-bent on killing Teague before he can be secured.

Opening to an atmospheric music score over some night-time aerial footage of London, the modest-budget sensibilities of the production are instantly elevated. Stu Bennett has a no-nonsense entrance as he boldly marches into a nightclub and violently dispatches some de rigueur scumbags.

Our hero and his team’s first encounter with Vinnie Jones and his henchmen is a tense mix of bullets and batterings. The highlight is Jones and Bennett going toe-to-toe, whetting the viewer’s appetite for the action to come.

With celebrated choreographer Tim Man on board, the subsequent fisticuffs from the supporting cast of martial artists feature lots of trademark high-jumping spins and kicks. Bennett’s scenes are well put together and shot but much less flamboyant. Why head kick when you can break an elbow or smash a head into a wall? And of course the former WWE star drops in a few signature wrestling moves. There is also a great deal more humour sprinkled throughout the fighting compared to the first film.

For a film that could have easily drowned in it’s own testosterone, Katrina Durden and Phoebe Robinson-Galvin are given several great opportunities to demonstrate that their screen-fighting martial arts skills are a match for the male characters.

A genuine surprise and treat is seeing former Wimbledon, Chelsea and Wales footballer Vinnie Jones getting properly stuck into the action. Although he has forged a career as a hard-man on the pitch and onscreen, I don’t think I have ever seen him take on the more sophisticated end of the spectrum of martial arts-style fight choreography.

This is a sequel that ups the ante on its predecessor in every department. The action, the scope and the humour are all ratcheted up. The film harks back to the low-budget action movies in the golden age of VHS rentals, but with a modern eye on how to keep it entertaining. The camerawork, lighting, sound recording and music score all belie a modest budget, giving it gloss that other movies in the same vein often lack. With it’s tongue pressed very firmly in its cheek, the dialogue frequently and knowingly delivers plenty of amusing nods to the clichés of the genre.

In terms of bang for your buck, you’ll be hard-pressed to find many films that fill their running time with as much action as this one does. Barely a five minute pause for breath passes between each fight, shootout, stunt or explosion.

Stu Bennett really has found a character in John Gold that he can run with. Vinnie Jones is great as the villain, but playing a tough bad guy isn’t something new for him. However, demonstrating that he can admirably pull off this level of fight choreography is. I hope we get to see him perform more of it in his other film work.

Without ever taking itself too seriously, this is an eighty-minute buffet of non-stop entertaining action! 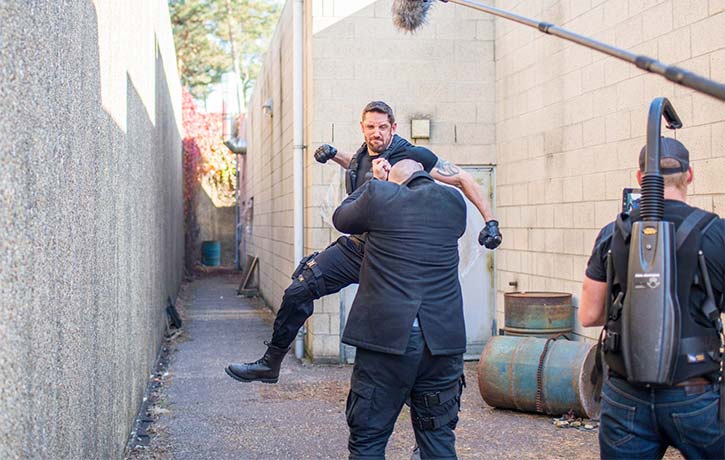 The action the scope and the humour are all ratcheted up

“I Am Vengeance: Retaliation” is out in the USA and releases in the UK today, 13th July 2020, courtesy of Evolutionary Films.

Watch “I Am Vengeance: Retaliation” via Amazon, now!

Are you a Stu Bennett fan? (Stay tuned for our exclusive interview with the WWE superstar coming soon…) What do you think of his John Gold “Vengeance” movies so far? How would you like to see his hard-hitting character portrayed in a potential Part 3?

KEEP YOUR WRESTLE ON…and elbow click your way into the FUniverse, and these Top 5’s, Top 10’s, deep-dive interviews, direct your vengeance into your training whilst wearing Official KFK gear, and subscribe for more action-packed wrestle-hustle-bustle fight action on YouTube!