Don’t let his codename and comic book origins fool you – Mike Fallon is hardly a superhero, but he does have a unique talent for bumping people off and making their deaths appear like nothing more than tragic misfortunes to the naked eye. Based upon the eponymous British comic book, “Accident Man” pulls no punches in its blend of tongue-in-cheek black comedy and unapologetically R-rated action, and delivers everything audiences crave from a strictly adults only comic book movie!

In addition to producing and co-writing the film, Scott Adkins portrays the cynical, tough-as-nails assassin Mike Fallon, a man with a gift for executing hits without arousing suspicion. Ray Stevenson portrays his mentor and retired fellow assassin, Big Ray, while David Paymer plays Milton, the man who puts to use the killing talents of Mike and his fellow assassins. Our heroes’ partners in crime include ex-Special Forces operatives Mick and Mac, played by Michael Jai White and Ray Park, the axe-wielding Carnage Cliff, played by Ross O’Hennessy, the ghoulish Poison Pete and nebbish Finicky Fred, played by Stephen Donald and Perry Benson, while the sword-wielding Jane the Ripper is played by Amy Johnston. The brief but pivotal role of Mike’s ex-girlfriend Beth is embodied by Brooke Johnston, while Ashley Greene steps into the role of Charlie Adams, with whom Mike forms a decidedly tense bond given her connection to his deceased girlfriend.

Mike has a worthy opponent in Jane the Ripper

Mike fends off an attack from Jane the Ripper

London teenager Mike Fallon wants nothing more than to complete his paper route in peace, but the constant beatings he endures from a local gang of bullies makes his life a living hell. That is, until he discovers a neighbour by the name of Big Ray is secretly an assassin, and with some persuasion, Mike convinces Ray to take him under his wing to exact vengeance on his tormentors. Fast-forward twenty years, and Mike now makes a handsome living as an assassin.

His speciality of making his hits appear to be nothing more than horrible accidents earns him the moniker of “Accident Man” among his fellow assassins who frequent “The Oasis”, the pub of choice for contract killers in London. Mike’s pride takes a hit after his girlfriend Beth leaves him for a woman, and after she’s inexplicably murdered, he learns from her new lover, Charlie Adams, that she was pregnant with his child. Mike is determined to uncover who ordered the hit on Beth and why, and his vendetta inevitably brings him into conflict with the other patrons of The Oasis.

It’s easy to forget today that there was a time when comic books and movies based upon them were thought to be almost exclusively for children and adolescents. It goes without saying that those days are long gone, but what’s more surprising is just how much the pendulum has swung in the other direction. Today’s comic-book movies are not only striving for age-neutrality more than ever before, but there’s an increasingly strong demand for explicitly adult-oriented comic-based adventures. From “Dredd” and “Kick-Ass” to “Kingsman” and even more outrightly, superhero adaptations like “Deadpool” and “Logan”, comic book movies that land themselves an R-rating are wearing it like a badge of honour. “Accident Man” is cut from the exact same cloth as all of those films, and proudly flaunts itself as a potty-mouthed bloodbath that gruesomely offs one character after another with an unapologetically dark sense of humour worthy of “Robocop”. 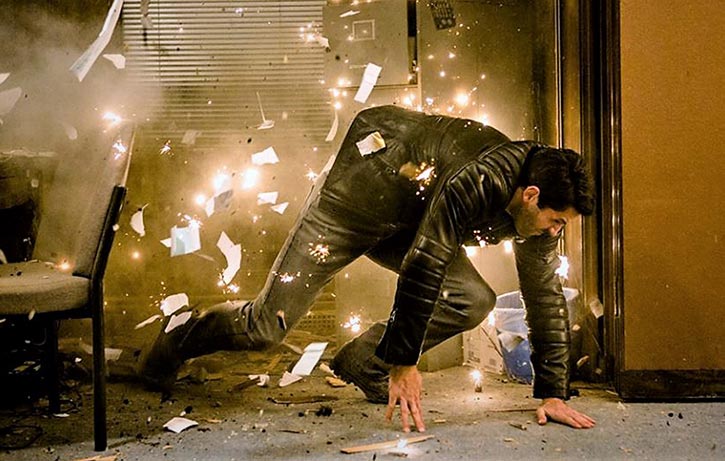 Mike flees from a ballistic assault 1

Mike leaps in with an aerial attack 1 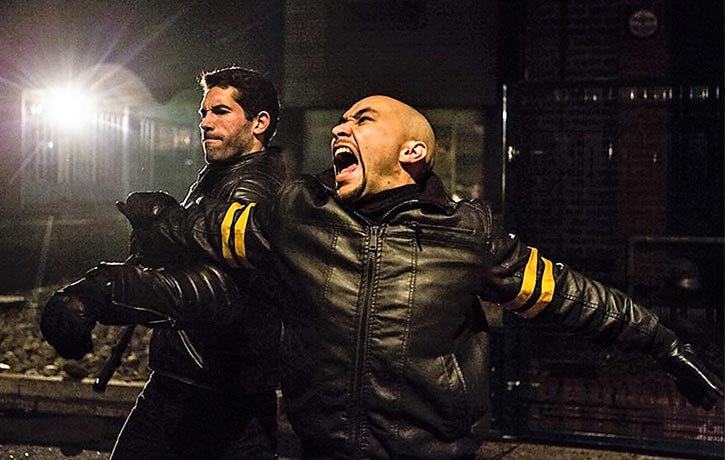 Mike gets the better of his opponent

Mick has had enough of Mikes antics

The opening scene sees our “hero” Mike Fallon snapping a selfie next to his latest victim as his lifeless corpse dangles from a noose, and that sets the tone for the rest of the film. Even after seeing the thoroughly tongue-in-cheek trailer, most viewers will probably be genuinely surprised at how much of a black comedy “Accident Man” is, and at how much the film manages to be both subtle and in your face about it. The film leaves it for the viewer to decide whether Jane the Ripper earned her nickname from her sword-wielding skills, or from her reputation for emasculating her victims and storing their family jewels in a trophy case – seeing the film’s sense of humour in its totality, I’d incline towards the latter.

Naturally, with its ensemble cast, “Accident Man” is as packed with action as it is with comedy, and often blends the two so well as to end up resembling what you might get if you plugged Jason Statham into the plot of a Jackie Chan movie. The audience easily gets their money’s worth solely from Mike’s two-on-one brawl with Mick and Mac, but it’s actually in some of the smaller bits of action that “Accident Man” really shines.

Mike’s street fight with a Triad assassin, played by fight choreographer Tim Man, leaves you almost feeling sorry for the poor guy after how contemptuously Mike punts him all over the street, while being no less comedic than the rest of the film. Scott also gets another hilariously lopsided “Undisputed 4” rematch of sorts, with Martyn Ford, during Mike’s interrogation of Milton, which consists entirely of Mike repeatedly knocking Milton’s bodyguard out like a light in possibly the single funniest scene in a movie filled with funny scenes. However, Mike’s one-on-one with Jane the Ripper is arguably the film’s most show-stopping fight, in large part because of how much Amy relishes playing a villain, and for just how much Mike’s equal Jane the Ripper proves herself to be!

Big Ray takes the young Mike Fallon under his wing

Mike checks the coast is clear

Mike is undeterred by his enemies

The Accident Man plots his next hit 1

Whether it’s a black comedy or a comic book movie that’s strictly an Adult Swim you seek, you’ve come to the right place with “Accident Man”. With a flawless blend of dark humour and blood-splattering action, the film more than earns its place in the Hall of Fame of comic book movies for which viewer discretion is advised – and when all is said and done, will leave you eager to tag along for Mike Fallon’s next deadly mission. “Accident Man” is in the business of killing and laughter, and business is booming!

“Accident Man” is available on Blu-ray and VOD now! Hyped for it? Let us know your impressions (or after you’ve seen it) in the comments below, join in the conversation on Facebook and follow us on Twitter (Be sure to check out our previous movie reviews too!)