Movie marketing is a funny thing. The centrepiece of getting butts in seats is the trailer, the primary tool by which audiences are enticed to give their time and money to upcoming films and crafting a good one is as much an art as filmmaking itself. Perhaps in the (admittedly commendable) aim of not overexposing too much of the film before viewers get a chance to see it, the trailer for “Eliminators” really undersells what a suspense-filled adrenaline ride the film is. It just goes to show that sometimes looks can indeed be deceiving.

The great Scott Adkins steps into the role of our hero, Thomas McKenzie, a man whose past comes back to haunt him in the form of the bloodthirsty assassin George “Bishop” Edwards, played by WWE’s Wade Barrett. Lily Ann Stubbs portrays Tom’s 8-year-old daughter, Carley, while James Cosmo plays the film’s arch-villain, Charles Cooper, Bishop’s employer with a vendetta of his own. Fortunately, Tom gets some much needed assistance from his close ally Ray Monroe, played by Daniel Caltagirone.

There was a time when Thomas McKenzie served as a special agent for the U.S. Government. However, after his wife was killed by a car bomb intended for him, Tom left that life behind, only wanting to focus on raising his young daughter, Carly. He now lives in London under the alias of “Martin Parker”, but his domestic bliss is suddenly shattered when a gang of burglars busts into his house, having gotten the wrong address for a drug deal, forcing Tom to use his skills to defend his daughter and leaving the entire gang dead.

Thomas must go on the lam to save his daughter

The Bishop stalks his prey

Carly is taken into child protection services while Tom finds himself held in police custody attempting to prove that the bloodbath in his home was an act of self-defense. Unfortunately, with his face all over the local news, Tom finds himself targeted by the vicious assassin Bishop, employed by the American crime boss Charles Cooper, who holds an old, bitter grudge against him, leaving Tom no choice but to go on the run and get to Carly before his pursuers do.

Something that doesn’t get brought up these days as much as you might expect is how prolific WWE Studios has become in producing and distributing action films, and generally pretty good ones, at that. 2002’s “The Scorpion King” has aged well as a genuinely fun throwback to the sword-and-sorcery genre, “The Rundown” is still arguably The Rock’s best film outside of the “Fast and Furious” series, and while “The Marine” is brain-dead enough for you to believe that the script was written in crayon, it out-Commando’s Arnold Schwarzenegger’s “Commando” far too crazily and (literally) explosively for you to possibly care.

Cooper has a vendetta to settle with Thomas

Sure, you still see the occasional bump in the road (was there even a single person in the entire world who was asking for a “Jingle All The Way 2”?), but just a cursory glance at WWE Studios’ filmography and it’s definitively clear that pro-wrestlers are making far more successful bids at big screen stardom than in the days of Hulk Hogan’s “Suburban Commando” (which, to be fair, at least gifted the internet with one bit of endlessly quotable dialogue).

Playing in the “man on the run from his dark past” sandbox, “Eliminators” is palpably suspenseful and unnerving in all the right ways, owing to both a tight screenplay and Wade Barrett’s performance as the unrelentingly sinister Bishop. It’s often said that a hero is only as strong as the villain he opposes and that’s most certainly the case here. The villainous Bishop relishes the opportunity to shed blood so much that he’s probably conducted at least a few hits for free and he pursues both Thomas and his daughter with a zeal more commonly associated with your average Terminator. “Eliminators” would most certainly be a lesser film without him.

The greatest failing of “Eliminators” is actually external of the film itself, but it needs to be said that the trailer drastically undersells the film its advertising. Obviously, you do your audience no favors in over-exposing a film before they get to see it in its entirety, but Tim Man’s action direction and the blood, sweat, and tears that Scott Adkins and Wade Barrett doubtlessly poured into their head-to-head matchups are showcased with far more modesty in the trailer than what the final product delivers.

Bishop never stops until the kill is his

Thomas nurses a wound while on the run

Cooper may have finally found his target

Thomas only thinks hes got the upper hand

Ironically enough, the film itself practices a similar restraint that’s a textbook example of how to hold back just long enough to deliver a really satisfying payoff. Most of the first two-thirds of the film plays out as cat-and-mouse game through the streets of London between Thomas and Bishop, with our hero periodically forced to fight off ancillary pursuers in hospitals and cable-cars just often enough to hold the viewer’s eagerness for them to go mano-a-mano at bay.

By the time Bishop finally catches up with Thomas, the film has accumulated so much potential energy into their conflict that we get two showdowns of assassins for the price of one, either one of which would’ve been a perfect final battle by itself. The physically imposing Barrett (in excellent shape here) assaults our hero with a barrage of suplexes and body slams while Scott dishes out his signature flips and kicks along with a few robust, pro-wrestling-esque manoeuvres of his own.

When the dust finally clears and the moment of truth comes for Thomas, the final confrontation closes the film out a tad too abruptly, but ties up loose ends with a fittingly emotional payoff of its own, bringing our hero’s story full circle with a villain whose motivations are shocking in how understandable they are. 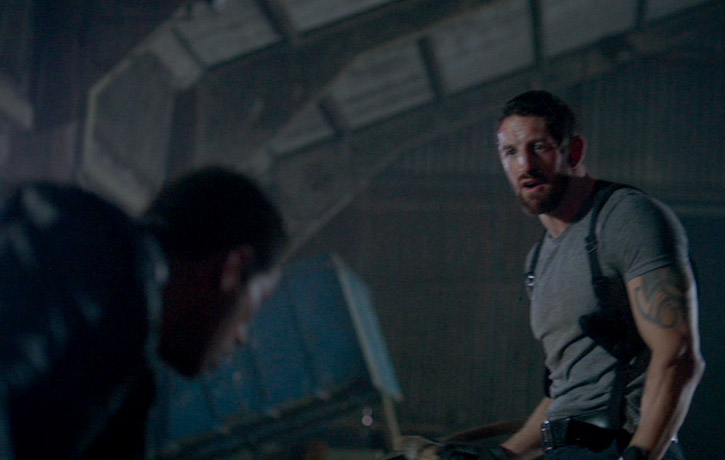 Bishop seems to have Thomas on the ropes

The fun and perils of public transport

Thomas nails Bishop in the face with a perfect side kick

Thomas throws Bishop off balance with a flying side kick

As packed with suspense as it is with action, “Eliminators” is an action-thriller with equal attention given to both genres. Wade Barrett’s portrayal of the bloodthirsty Bishop is genuinely ruthless, Scott Adkins is nimble and powerful as ever and the big boss at the top is humanized in a way that makes him easier to sympathize with than most viewers will be expecting. The film also has a significantly better grasp on how to hold off on the pot of gold at the end of the rainbow than its own trailer does, most certainly a feather in anybody’s cap!