Before 2017, female-led superhero movies, what few there had been anyway, were synonymous with the phrases of both “box office poison” and “terrible movie”. Certainly, there has been no shortage of male-led comic book adventures to meet both of those standards, either, but superheroines still faced quite the uphill battle in combating the terrible reputation they’d been unfairly branded with thanks to “Supergirl”, “Elektra”, and the black hole of celluloid squalor that is 2004’s “Catwoman”. Fortunately, with the release of “Wonder Woman”, the fourth chapter of the DC Extended Universe, that curse has finally been broken, and how fitting it is that the superheroine to break that losing streak would be the very first!

Gal Gadot steps into the role of Amazonian Princess Diana of Themyscira, reprising the role for last year’s “Batman v Superman: Dawn of Justice“, and it can truly be said that by the end of the film, hers is one of the biggest breakout performances ever seen in a superhero role. Connie Nielsen portrays her mother and Amazonian Queen, Hippolyta, while Chris Pine provides both moral support and comic relief in the role of American pilot Steve Trevor.

Robin Wright plays Diana’s mentor and fellow Amazonian warrior, General Antiope, while Danny Huston plays German military leader Erich Ludendorff, with Elena Anaya portraying his devious confidante, Doctor Poison. Diana also finds another ally in the form of Steve’s secretary Etta Candy, played by Lucy Davis, while David Thewlis rounds out the cast as the shadowy British Parliamentarian Sir Patrick Morgan, who may or may not be a friend to our heroes.

Diana is perplexed by the armor worn by women today

Shes come to put a stop to this war 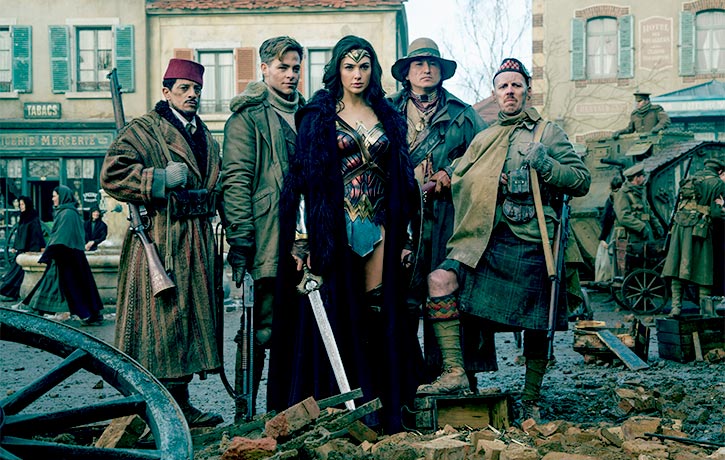 Diana stands by her fellow warriors

The island of Themyscira, home of the Amazons, hides from the world of man. Princess Diana, daughter of the Amazonian Queen Hippolyta, who was sculpted from clay and brought to life by Zeus, is determined to become as strong a warrior as her fellow Amazons, but after thousands of years of seclusion from the outside world, the Amazons find themselves pulled into the center of World War One when American pilot Steve Trevor crash lands onto their shores. Steve explains the ongoing war and that he’s stolen plans for a new, deadlier form of mustard gas that German general Erich Ludendorff is poised to unleash upon the world. Diana believes that the world of man has fallen under the influence of Ares, the God of War and that his demise will free the world of his grip and bring the war to an end. Believing that it is the duty of the Amazons to oppose Ares, Diana accompanies Steve back to England, to stop Ares and end the war once and for all…

Wonder Woman arrives in the heat of battle

Diana prepares to launch her attack

The Amazons are taken aback by Steve Trevors news

As tiresome as it might be at face value to make comparisons to previous female-anchored superhero films, the sheer quantum leap in quality made by “Wonder Woman” over past genre films makes such comparisons all-but-impossible to avoid, even more so by the strength of Gal Gadot’s performance in the title role. Diana may have stolen the show in “Batman v Superman”, but Gadot carries the character’s first solo outing with the ease of, well, an Amazon! I dare say, she’s arguably on par with Hugh Jackman’s tenure as Wolverine for performers who were simply born to play a superhero role (the DC Universe has been nothing if not impeccably well-cast). Considering that she comes on the heels of Dafne Keen’s breakout appearance as X-23 in March’s “Logan”, it truly feels like the glass ceiling blocking the rise of superheroines has at last been shattered to pieces. Good riddance to bad rubbish!

Unleashing her mighty Lasso of Truth

Antiope leads the Amazons in battle

Diana is a highly skilled archer

Like many superhero films in the current comic book movie renaissance, “Wonder Woman” also makes a concerted effort to have its foot in other genres, as well, and works its magic as both a World War One-era period film and a “300”-esque Greek action adventure. The genuinely epic sense of scope and scale, another staple of the ongoing DC Universe, is so vast and expansive, both in Themyscira itself and the battle sequences across Europe, that the film’s $149 million budget seems a surprisingly conservative figure – certainly for how fully Diana’s abilities are realized on-screen. “Batman v Superman” saw The Dark Knight’s most incredible on-screen battle to date in the film’s warehouse brawl, and “Wonder Woman” simply relishes the opportunity to rise to the same standards of superheroic martial arts action from the moment Diana first picks up a sword.

The true strength of the approach the film takes in its action sequences lies in its similarity to “Blade II“, in that both adopt an approach of using CGI and wire-work as tools of enhancement in the truest sense of the word. Gadot and the rest of the cast carry the action up to the edge of what a human can accomplish, with CGI and wire-fu being used to fill in the gaps towards the pinnacle of their godlike physical abilities. What’s more, Diana spends the first half of the film testing her limits; discovering the full extent of her strength and durability, culminating in an absolutely awe-inspiring battle on the German front lines where she all but ends the war single-handedly. This is also where the audience finally gets to see her put the Lasso of Truth to its fullest use amid some amazing spinning kicks and effortless tossing of German armored vehicles.

The film darkens a bit in its final act, as Diana begins to see her black-and-white mindset towards saving the world being challenged, but the viewer will only find that much more reason to stand and cheer both her and Steve in the final battle with Ares. Steve ultimately proves the decisive factor in Diana’s motivation to hold onto her idealism and her final confrontation with Ares, a fully realized Greek god and comic-book supervillain (if ever there was one) stands toe-to-toe with the Trinity’s battle with the monstrous Doomsday last year. It’s going to be a long wait to see Diana’s return in this November’s “Justice League”!

Diana all smiles after her victory in battle

Diana arms herself to bring down Ares 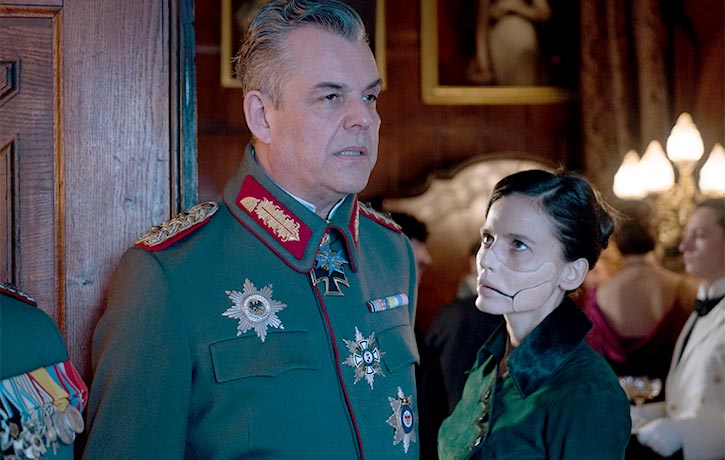 Audiences and comic book lovers alike may never have thought they’d ever see a solid female-led superhero film after the abysmal track record of what’s come before, but few will be compelled to walk out of “Wonder Woman” without proclaiming, “We FINALLY got a good one!” Gal Gadot carries the film with a truly star-making performance as the world’s first superheroine, while Chris Pine brings plenty of levity and emotional depth and Diana’s abilities are brought to life in breathtaking action sequences that are simply stunning to behold! And yes, that intensely pulse-pounding, “Wonder Woman” music theme sets the epic tone of a timeless classic…

Themyscira Home of the Amazons

Hippolyta tells Diana of her origins..

The Amazons always stand their ground 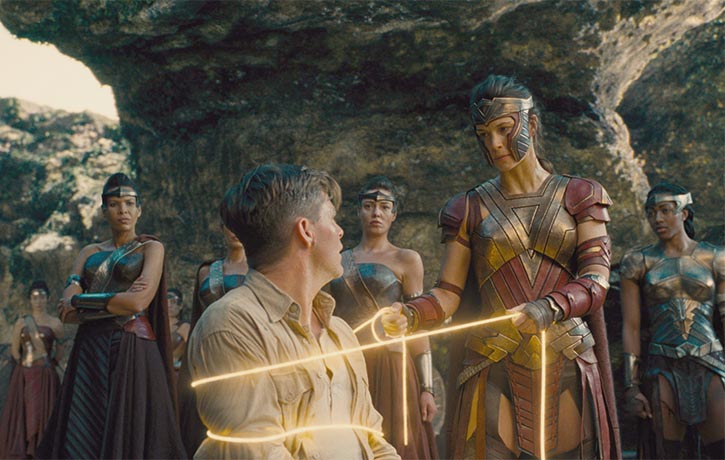 The Lasso compels Steve to tell the truth 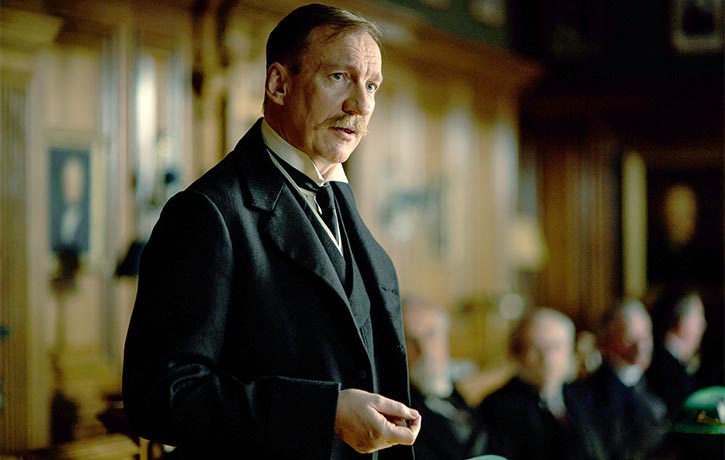 Sir Patrick Morgan is more than he appears..

Adjusting to life outside of Themyscira

Wonder Woman prepares to enter the world of man