There’s an intangible aura of passion and excitement that permeates any well-made film of any genre, one that, in essence, tells the viewer what the mood of its maker was. To put it simply, it shows whether the people making the film were having a blast or just getting through a chore. “Warrioress”, thankfully, is clearly in the former. Despite working on relatively limited means, director Ross Boyask and a cast highly skilled martial artists manage craft an engaging martial arts adventure about a warrior woman facing her destiny to become the savior of her people in the post-apocalyptic World.

The role of the titular Warrioress Boudiccu (pronounced Boo-dee-soo) falls into the hands of Cecily Fay, a world-class Silat exponent, gymnast, and stuntwoman, who has also appeared in director Ross Boyask’s previous films “Left for Dead” and “Ten Dead Men”. There’s been a noticeable dearth of Cynthia Rothrocks and Michelle Yeohs in the 21st Century, and it’s safe to say that few women working in action films today would be able to match Fay’s agility and fighting prowess. That is, save for her supple co-stars in the film. Joelle Simpson tackles the role of Boudiccu’s fellow nomadic warrioress White Arrow, while Helen Steinway Bailey provides one of Boudiccu’s more formidable adversaries in the form of warrioress Djahn.

Will Brenton tackles the film’s villain, a would-be dictator known only as the Falonex Emperor ever shrouded in the darkness of his secret lair, while Boudiccu’s sister Morwenna is portrayed by Cecily’s Fay’s real-life sister and fellow Silat practitioner Merrilees Fay. Finally, Boudiccu’s chief ally and lover Finnvarah is played by Christian Howard, best-known for playing Ken Masters in the short film “Street Fighter: Legacy” and his role in the film goes a long way towards containing the anticipation for the upcoming “Street Fighter: Assassin’s Fist”.

Boudiccu readies herself for the battle ahead 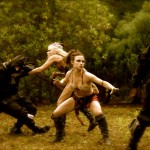 These ninjas just came out of nowhere literally

Its all over for you my friend

The film takes place in a post-apocalyptic future which has been reduced to a number of disparate tribes scattered throughout the remains of civilization. The surviving tribes hold to a prophecy of two equally skilled warriors who wield two ancient swords known as “The Opener” and “Dragon Singer”. One such tribe holds a competition every generation known as the “Tournament of the Sister Swords”, with the winner to be tasked with taking the two swords and seeking out a chosen representative from the North at an arena known as the Dueling Circle. According to the prophecy, if neither warrior is victorious, both are the foretold warriors, who together will wield the sister swords to defend what is left of civilization and bring down the merciless conqueror of the land known only as the Falonex Emperor. The victor of the latest tournament is the warrioress known as Boudiccu. Hearing of her victory and knowing that the will of surviving tribes to resist his rule rest on their faith in the prophecy, the Falonex Emperor tasks his troops with intercepting Boudiccu on her journey to the Dueling Circle and destroying both swords.

Shortly after leaving the village and decimating the Falonex Emperor’s first attack, Boudiccu is joined by her sister Morwenna and her lover and fellow warrior Finnvarah, who reasons that the journey to the Dueling Circle is too perilous and full of Falonex’s troops even for a warrior as skilled as Boudiccu to travel alone. Along the way, the three stumble upon a “tomb of the ancestors” (which is actually a WWII-era Nazi bunker) and uncover a book with similar markings as those found on the stones containing the prophecy. The group tasks Finnvarah to return the book to the village, in the hopes that translating it can additional information related to the prophecy. Shortly afterward, Morwenna is killed by another cadre of Falonex warriors. Boudiccu decimates nearly all of them, but is badly wounded by group’s leader Djahn, who claims to have killed Finvarrah on his way back to the village before stealing both swords and throwing Boudiccu off a cliff.

However, Boudccu survives the fall and encounters a wandering warrior named White Arrow, and the two join forces to retrieve the swords and free White Arrow’s fellow villagers, including her sister, who have been captured for slave labour by the Falonex warriors. After storming the Falonex base and freeing the slaves, Boudiccu slays Djahn and retrieves both swords before continuing her journey with White Arrow accompanying her. Hearing of this, the Falonex Emperor dispatches another group of warriors to intercept them, but they prove no match for the combined might of Boudiccu and White Arrow. Upon reaching the Dueling Circle, White Arrow reveals that she is the opponent Boudiccu is to face, concealing her identity to learn Boudiccu’s fighting style. Despite her reluctance to fight her comrade, Boudiccu ultimately defeats White Arrow, before honouring her promise to bring news of White Arrow’s death to her people. Boudiccu then returns to her village to see Finnvarah alive and well. She tells her people that the quest for the prophecy has placed the disparate tribes at odds with one another when they should be united in their fight against the Falonex, and she rallies her fellow villagers around her new strategy of uniting with the tribes of the north.

It is evident that “Warrioress”, like director Ross Boyask’s previous films, is being produced on quite humble resources, but what the film lacks in money it more than makes up for in action. Boyask is clearly a huge fan of martial arts cinema, and his filming of the film’s abundant action is testimony to that. As with “Left for Dead”, Boyask lets his dexterous actors, nearly all of whom are life-long martial artists, do the talking, while the camera does the unthinkable and sits still while the battles unfold. A word of advice to Hollywood action directors – if the audience can see the action, that’s actually a GOOD thing!

It’s easy to see that the film is greatly inspired in its structure and construction by Wonder Woman comics and the show “Xena: Warrior Princess”, and the action is as engaging and diverse as you would expect from either one. The styles of combat on display are varied and plentiful, but the films depiction of silat really stands out. Outside of the obvious examples of “Merantau” and “The Raid: Redemption”, “Warrioress” is fine a specimen of silat shot on film. The true power of this exotic martial art is magnificently executed by the lovely Cecily Fay, who also served as fight choreographer alongside Joey Ansah of “Street Fighter: Legacy” fame, in addition to writing the story and composing for the film as well!

Fay effortlessly transitions from striking to takedowns on a whim, and often creates combinations mixing both. Her first duel in the film is a prime example of this, and by the end of the film, she has more than solidified herself as a modern-day Angela Mao! Her petite stature also means that just about every opponent, she faces in the film, male or female, is at least twice her size, and that lends itself to a genuine sense of danger when she does battle.  The choreography also makes liberal use of weapons work, and this is primarily dominated by swordplay from the silat to wushu variety, though White Arrow’s use of a bo staff keeps the weaponry as varied as the unarmed combat. As for Christian Howard, his action is somewhat truncated by having Finnvarah return to the village during the quest, but he still pulls off some impressive Van Damme-esque flying kicks and leaves the viewer knowing that Ken Masters is in very good hands!

Go ahead make our day

“Warrioress” is clearly a labour of love by some seriously talented people who have taken a shared love of martial arts and martial arts cinema and crafted a kind of modern day legend with the film they’ve made. With just a fraction of the resources most mainstream action films have to work with, the film’s plentiful action often runs circles around the “Bourne”-style shaky cam that fells so many Hollywood films today. And the film also sets up an intriguing warrior mythology that could be taken in any direction if there is a “Warrioress 2” (and if the ending of the film is any indication, there will be).

STAY IN TOUCH WITH THE WARRIORESS TEAM!