The fourth collaboration between Scott Adkins and Isaac Florentine, “Ninja” was released in 2010, and many who saw the film expressed a certain degree of dissatisfaction – including Adkins and Florentine themselves. The film marked the first time Adkins took on a leading man role, and though he handled the task with the greatest of ease, the film didn’t manage to blow fans away to quite the same degree as the exploits of Yuri Boyka had (in Undisputed 2 and 3), and the proximity of the debut of “Ninja Assassin” to the release of “Ninja” certainly didn’t help matters. All of that only serves to make “Ninja II: Shadow of a Tear” leave that much more of an impression on the viewer. Following the film’s premiere at Fantastic Fest in Austin, Texas (this past September), the general consensus has been along the lines of “Best DTV (Direct To Video) martial arts movie ever”, and it’s a title that is likely to be, well…Undisputed for sometime to come…!

Reprising his character of American ninjitsu master, Casey Bowman is Scott Adkins, although in keeping with the darker tone of the film, his character is much more of a loose cannon than viewers saw in the original film. More of straight arrow the time around, Casey is now a man who has been stripped of everything he holds dear, and by the climax, has almost become Boyka’s kindred spirit! Mika Hijii also returns as Casey’s wife and fellow ninjitstu exponent, Namiko. Kane Kosugi is a tremendous addition to the film in the role of Nakabara, a close friend of Casey’s who runs his own Ninjitsu school in Thailand. Although he spends most of the film in something of mentor or moral support role, he leaves the viewers jaw to the floor with just as much ease as Adkins with the power and blinding speed he displays through his character. Indeed, one of the major improvements made over the first film is the percentage of the supporting cast and stunt persons who are equally adept in action roles as the film’s leading man, including Jawed El Berni, Ron Smoorenburg, Brahim Achabbakhe, Kazu Patrick Tang, and Tim Man who also served as the film’s fight choreographer. 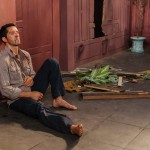 What have I done.. 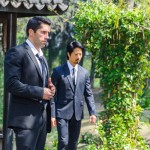 Practicing in the dojo.. 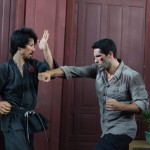 Since putting a stop to the rogue ninja master Masazuka in the original film, American ninjitsu expert Casey Bowman has assumed the role of Soke (head) over the Koga dojo, imparting all the secrets of the Way of the Ninja to his disciples. He is aided in his teaching role by his pregnant wife Namiko, the daughter of the school’s previous master. Life seems all but perfect for the happily married couple until Namiko is mysteriously murdered one evening while Casey is out.

After the funeral, the distraught Casey tracks down a pair of muggers he had fought off a few days prior, the evidence indicates they’re Namiko’s killers. However, his grieving is far from over, and he takes up his friend Nakabara’s suggestion of a sabbatical training in his dojo in Thailand. The irritable and petulant Casey struggles to move on from the tragedy, and finds himself taking his pain out on Nakabara’s students and Thai locals at the slightest provocation. His anger only grows stronger when one of Nakabara’s students is disposed of in the same manner as Namiko. Realizing that Namiko’s killer is still alive, Casey learns from Nakabara of a blood feud between Namiko’s family and a rival ninja clan whose descendant, Goro, runs a powerful drug cartel deep in the jungles of Burma. Realizing that Goro is most likely Namiko’s killer, Casey heads into Burma to avenge her murder and end the feud of the rivaling ninja clans once and for all…

As has generally been the case with the resumes of both Scott Adkins and Isaac Florentine, the action in “Shadow of a Tear” doesn’t only inspire a “Wow!” from the viewer but also a “Why?” as in, “Why did this not see a theatrical release?” To be fair, the film’s premiere at Fantastic Fest does somewhat undercut the validity of that question, but it is nevertheless supremely baffling that the words, “Coming this holiday season to a theatre near you!” are nowhere to be found in the trailer for “Shadow of a Tear” when the film itself is this good! To say that it surpasses the first “Ninja” doesn’t do the sequel justice – on top of being a darker, meaner, more action-packed, and an all-around better assembled, more impactful film than its predecessor, “Shadow of a Tear” rivals “Undisputed 3: Redemption” for the title of Adkins and Florentine’s greatest cinematic achievement.

Just by comparing the ninja garb Adkins wears in both films, one can see the new territory the sequel ventures into both in terms of its overall tone and the style of the action. Whereas Casey’s ninja suit in the original gave the impression of a Japanese superhero, his attire in the sequel is more evocative of guerilla warfare, and that difference is reflected in the almost-literally non-stop action that makes-up the film. The original strove to Japanize Casey’s combat prowess, which meant that, save for the final third, he relied primarily upon joint manipulations, reverse punches, and mostly basic kicking techniques. That approach is turned completely on its head in the sequel, with Casey’s fighting style only resembling his more calm, collected approach in the very beginning. Florentine is a master of using action as a vehicle for storytelling and character development, and after Namiko’s demise the film effectively ‘Boykafies’ Casey to reflect his vengeful emotional state. Casey cuts loose on anyone he perceives as an enemy, holding absolutely nothing back, unleashing everything from crippling grappling techniques to brutally swift kicks, including Adkins trademark Guyver kick. Meanwhile the enemies he faces are either skilled enough to necessitate his stronger offense, or find themselves forced to step up their game just to hold their own. It’s the equivalent of seeing the generally peaceful and placid Ip Man dispatching enemies with the same ferocity as the main heavy of the “The Raid”, Mad Dog. As a result, the fights last longer and push the characters to far greater extremes than seen in the original. As with the first film, “Shadow of a Tear” also makes liberal use of Japanese weaponry, and even better, the camera holds for exceptionally long stretches at a time. Adkins’ duels with Jawed El-Berni Tim Man, as well as the jaw-dropping final battle against Kane Kosugi are among the film’s action highlights as much for the clarity with which they are filmed as for the breathtaking nature of their choreography. One battle even sees Casey’s fists of fury reminiscently dispatching another school’s students – in a single, unbroken shot! 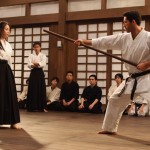 Madam you must improve in your ninja fu 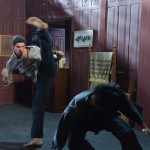 Captured and tortured in Burma..

A rather smashing fight

“Ninja II: Shadow of a Tear” is easily the best ninja film in a good, long while. That in itself would be enough of an achievement for most films in the genre, but the icing on the cake is Casey’s transformation into a character that could very well contend to take the title of: the Most Complete Fighter in the World from Yuri Boyka..we shall see! Adkins is well prepared and is at the very top of his game, while Kane Kosugi, Jawed El Berni and Tim Man, all show themselves to be on the same high plateau. If there were ever any doubt of the following statement, “Shadow of a Tear” puts it to rest – no one, but NO ONE, working in Hollywood today can make martial arts films as well as Isaac Florentine can!