English-language translation of Jackie Chan’s sensational warts ‘n’ all account of his life and career.

Now in his sixties, Jackie Chan takes a look back at his life and career. Starting with a troubled arrival into the world on 7th April 1954 in Hong Kong, Chan suffered hardship and failure before eventually finding success that would lead to him becoming a global superstar. This success, however, often came at a price that even Chan’s fabulous wealth could not fix.

This book spends less time on the details of Chan’s formative years and training than the previous biography, “I Am Jackie Chan“, and gets to his successful years as a star much more quickly. We learn revealing details such as his early, rather selfish, relationships with girls, and the way director Lo Wei tried to cheat Chan with a dodgy contract.

Chan is not shy in discussing how immature and vindictive he could be when he first achieved success. He even admits to smashing his Porsche and Mercedes whilst regularly driving drunk. For readers not familiar with the dark side of the burgeoning Hong Kong film industry, the book features some shocking descriptions of Chan’s brushes with the criminal underworld and the danger Chan was in as a result.

Throughout the book there are brief and interesting behind-the-scenes insights from Chan’s long time friend, Zhu Mo. Each one gives a unique perspective on key aspects of Chan’s fascinating life and career, and his relationships to the people encompassed therein. 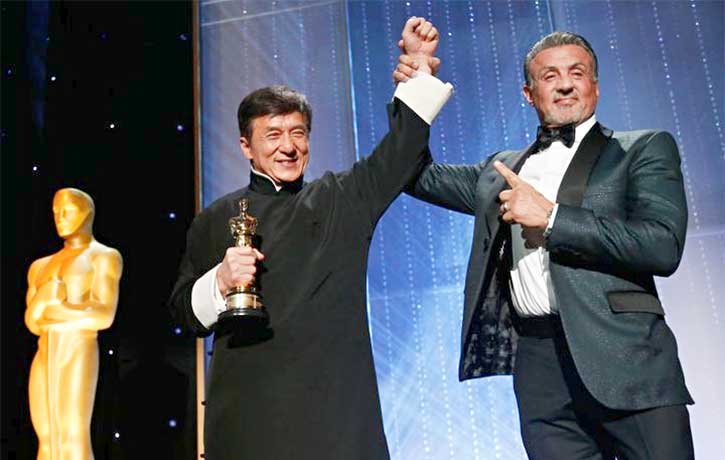 Shortly after the first book was published a surprising scandal rocked Chan’s career with the revelation in 1999 that he had had an affair, resulting in a child. Although Chan barely mentions the former Miss Asia, Elaine Ng, and their daughter Etta, he is very candid about the aftermath and the affect on his relationship with his wife, Joan Lin. In fact, there is quite a bit of time dedicated in this book with Jackie feeling bad that his busy career has meant he neglected his family life, especially in the eighties and early nineties.

Another scandal that rocked Chan’s career was his son Jaycee’s conviction and imprisonment in 2015 for drug offences. Chan is particularly candid about his troubled relationship with Jaycee, even admitting to throwing him across the room as a child. However there is also a lot of affection and redemption expressed for those closest to him throughout too.

Chan recites some great anecdotes about his experiences, good and bad, on many of his classic films. His near death experience on “Armour of God” and his famous clock tower stunt in “Project A“, or pole slide in “Police Story“, may be familiar to many fans, but are still interesting to read about in the star’s own words. Many of the funny anecdotes certainly back up the old showbiz adage “never work with animals”! A chapter is dedicated to amusing reminiscences from the making of specific movies. Some of Chan’s recollections are more foul-mouthed than you might expect from him, but they certainly made me laugh – especially the one about going to the toilet in Africa during the filming of “Who Am I“!

The first autobiography ended just before the release of Jackie’s breakout Hollywood hit, “Rush Hour“. Since then he has had several successful American films and it is interesting to hear his perspective on the differences between Eastern and Western action film making. It’s also funny how differently he his treated by western film makers now compared to when he first went to America.

A highlight of the book is the fascinating revelation about Chan’s true ancestry and the history of his parents, something he only found out about himself at the turn of the millennium.

Many of Chan’s movies preach messages of world peace or patriotism, but the message in his film “Chinese Zodiac” was a very personal one. The plot of the film is based around the true history of twelve bronze animal heads being plundered from China during the nineteenth century. In recent years it has been revealed that wealthy private collectors possessed some of the original heads. Jackie privately hoped that his film might influence the return of these fabulously valuable antiques to China. Sure enough, a year or so after the film’s release, two of the heads were returned with no request for financial compensation. Chan later found out that the owner, one of France’s wealthiest businessmen, had seen “Chinese Zodiac” on a plane and had been moved to do the right thing.

Jackie acknowledges his thousands of dedicated fans from all over the planet but also dresses the chapter with tales of some of the more obsessive, and scarier, fans.

For a book called “Never Grow Up”, the conclusion is almost about a man who finally did, once he reached his sixties! However, Jackie promises to adapt to the changing demands of his body so he is able to carry on entertaining us all for as long as possible.

This biography doesn’t supersede the first one but is an excellent additional and complementary entry into Jackie Chan‘s life story. It is written very differently to the first book, better in my opinion. It is equally revealing, shocking, funny and entertaining. Most of all though it feels honest. The first book was a fitting tribute to his master, Yu Jim Yuen, parents, and manager Willie Chan, recognising that Chan owed much of his success to the hardships and upbringing they instilled in him. The new book covers much of the same era, but with fresh accounts that read almost like a confessional. Chan obviously regrets a lot of his youthful misdeeds and behaviour with a lot of the early chapters being wracked with guilt.

The most surprising thing about this book is how willing Chan is to describe what a cruel, selfish and egotistical star he was for a great deal of his career. He treated many people, even those closest to him, despicably on occasion. Although most fans think of a squeaky clean, inspirational image of the star, Chan slept with prostitutes, and was a heavy drinker and gambler. However, his saving virtue in later years is that he has been willing to admit his mistakes and try to be a better person as a result. For the last couple of decades, Chan has been extremely charitable. There are many acts of kindness that other stars would be bragging about, that Jackie has kept to himself.

“Never Grow Up” is an essential read for fans and non-fans of Jackie Chan, delivering an insight like no other into the unique career of a genuine global superstar, and the effects of fame and fortune, both good, bad and ugly.

Young Jackie and his parents

Jackie Chan near his home in Victoria Peak

Have you read either of Jackie Chan’s biographies? What do you think of some of the stunning revelations in his latest book, and which perhaps surprised you the most? Also let us know your favourite martial arts books in the comments below and join in the conversation on Facebook, Twitter and Instagram!

Want more Chan-tastic action? Jump into the FU-niverse with these Jackie Chan Top 10’s, reviews, exclusive interviews, get yourself into some KFK gear, and subscribe to our YouTube channel for more FUrious Jackie Chan and other action fight clips!