Last year Eureka Entertainment put together one of the finest ever releases, two of action megastar Jackie Chan‘s best ever movies, “Police Story” & “Police Story 2”! They proved so popular that this excellent Blu-ray Box Set is to be re-released in a few days, on 16th September 2019. Check out our 10/10 review!

These iconic films explode onto Blu-ray from incredible new 4K restorations! Featuring some of the most dangerous stunts ever performed on camera, Police Story and Police Story 2 are a dazzling blend of gritty action cop drama and impeccably choreographed martial-arts sequences that revitalised the Hong Kong action genre and established Jackie Chan as a worldwide superstar.

Considered by Jackie Chan himself to be his best film in terms of pure action, “Police Story” stars Chan as “super cop” Chan Ka-Kui, who goes up against a notorious crime lord in a series of escalating set-pieces that resulted in many of Jackie’s stunt team being hospitalised.

Demoted to traffic cop after the events of the first film, Chan Ka-Kui is reinstated to the detective unit when a deadly gang of explosive experts blow up a building and threaten to blow up more if their demands are not met. Featuring yet more bravura stunt work, and even more injuries to its cast and crew, “Police Story 2” is to this day considered one of the best action films ever made.

The definitive release of these classics 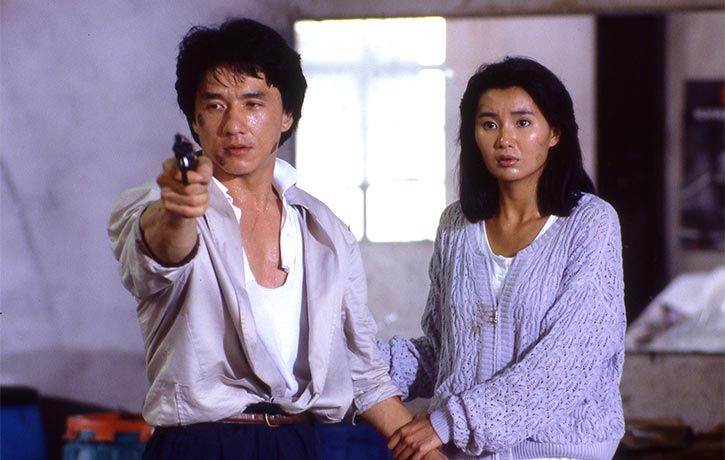 All bets are off when things get personal

This release is the DEFINITIVE must-have edition for all martial arts and action-mad movie fans!

The famous finale in Wing On Plaza

Lucky Kung Fu Kingdom readers can get their copy for FREE courtesy of our friends at Eureka Entertainment who have very kindly repeated the chance. BUT DO HURRY, COMPETITION ENDS SUNDAY 29TH SEPTEMBER 2019!

All you need to do to be in with a chance of winning is “LIKE” the KUNG FU KINGDOM FACEBOOK PAGE, “SHARE” this POLICE STORY BLU-RAY COMPETITION POST, and WRITE IN THE POST’S COMMENTS section, your answer to the following simple question:

Winners will be notified via Facebook message by 23:59GMT/BST Monday 30th September 2019.

The movie opens with a frantic shootout

Maggie Cheung as May

This image of Jackie was used in a Police Recruitment campaign

You can also order your copy of this title here via Eureka Video. What other kung-fu classics would you love to see restored to pristine audio/visual glory and WIN into your collection? Let us know in the comments below; Like, share and join in the conversation on Facebook, Twitter & Instagram.

Get yourself into a whole world of Friday FU-flix check out the main man Jackie Chan’s book review, these Jackie Chan Top 10’s, in-depth interviews, grab your own KFK gear, and subscribe to our YouTube channel for more mental martial arts action!

Teenage Mutant Ninja Turtles: Out of the Shadows (2016)