This film is all about its star, Jackie Chan.

There are some slightly longer snippets from fellow star and “big brother”, Sammo Hung, as well as Jackie Chan’s co-star from “Police Story 3: Supercop”, Michelle Yeoh, and the director of that movie, Stanley Tong.

Other than the narrator and Jackie himself, his father Charles Chan, and former manager, Willie Chan (no relation!), give some of the more interesting insights.

Wesley Snipes is a big fan of Jackie Chan 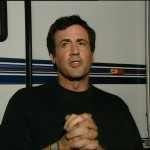 Sylvester Stallone states they are waiting for the right project to work on together. Still waiting

Stallone shares a warm moment with his friend

Snake in the Eagles Shadow made Jackie Hong Kongs No.1 star

The documentary follows a fairly linear “from birth to present day” timeline of Jackie Chan’s career.

The documentary begins with a quote from one of his biggest influences and heroes, Buster Keaton; “Only things that one could imagine happening to real people, I guess, remain in a person’s memory”. There follows a montage of television appearances, before some fast cuts of his most stunning action scenes, to remind the viewer of how prolific a performer Jackie Chan is.

Jackie Chan was born in Hong Kong on 7th April 1954, weighing 12lbs. The nurse described him as a “cannonball”! At an early age, the Chan family moved to Australia where his father was a cook and his mother a housemaid at the American Embassy.

In 1960, Jackie was enrolled in Yu Jim Yuen’s Peking Opera School in Hong Kong. The training was tough and the Master would beat the students if they didn’t work hard. Jackie’s parents signed a contract that stated if he died from a beating, the school was exonerated of responsibility! It was at the school that Jackie formed his lifelong relationship with fellow students, Sammo Hung and Yuen Biao.

Jackie and many of the future stars of Hong Kong action films, were part of an opera troupe called “The Seven Little Fortunes”. With “the fortunes”, Jackie made his movie debut aged just seven years old in “Big and Little Wong Tin Bar”. The break from the daily grind of hard training, and the fun he had making the film, made Jackie decide he wanted a career in movies.

Aged seventeen, Jackie aspired to become a “Lung Fu Mo Shi”, a term for the most daring of stunt performers in the blossoming Hong Kong film industry. His big brother Sammo Hung got him his first breaks in the industry, and Jackie would volunteer to perform the most dangerous stunts. Jackie worked as a stuntman in Hong Kong icon Bruce Lee’s 1972 film, “Fist of Fury”, and later, “Enter the Dragon”. It was during the filming of “Enter the Dragon” that Bruce Lee accidentally hit Jackie with a stick. When the director called cut, Bruce ran straight to Jackie to make sure he was okay!

After Bruce Lee passed away, “Fist of Fury” director, Lo Wei, tried to launch Jackie as the “new Bruce Lee”, with little success. In 1978, Jackie was “loaned out” out to Ng See Yuen’s Seasonal Films, where he was allowed more creative freedom and came up with the first “kung fu comedy”, “Snake in the Eagle’s Shadow”. The film and it’s follow up, “Drunken Master”, were hugely successful, and Jackie Chan became Hong Kong’s biggest star.

Jackie decided with each film he would push himself to the limit, and perform all his own stunts. His injuries have been numerous in the name of entertaining his fans and include a fractured chest bone, burned hands, damaged spine, dislocated cheekbone and several broken fingers. His closest shave with death came in the then Yugoslavia, where he nearly died from a fractured skull after falling from a tree.

Jackie Chan had made several attempts to break into the American film market, but with limited success. The Hollywood process didn’t allow him to play to his strengths in films like “Battle Creek Brawl”, “Cannonball Run” and “The Protector”. However, they did educate him in modern filming methods, and he took some of that knowledge back with him to Hong Kong.

The documentary concludes with Jackie Chan in 1998 on the cusp of breaking out in the West, which he subsequently did with films like “Rush Hour” and “Shanghai Noon”.

Jackie with his former mentor and manager Willie Chan

Jackie talks candidly about his childhood

Jackie still works out every day

Jackie nearly died after a jump from a tree went wrong

The action scenes are short but numerous throughout the documentary. The most interesting action scenes are inter-cut with Jackie Chan explaining what is going on, how it was filmed, how he was injured, or how many takes he spent getting it right! This is particularly interesting for example when he talks about the clock tower stunt in “Project A“, or his brush with death in the fall from the tree in “Armour of God”.

There is some rare behind-the-scenes footage from his earliest films, right up to his filming at the time the documentary was made in 1997/98.

One of the best sequences in the documentary looks at Jackie’s fight with American Karate legend Bill “Superfoot” Wallace in the American movie “The Protector”. Jackie wasn’t happy with the finished fight, so when the film was released in Asia, Jackie re-shot some of the sequences and re-edited the scene. He takes us through shot-by-shot, and difference is crystal clear – Jackie’s version is faster, more frenetic, fraught with much greater peril, and of course, much more entertaining!

There is some great footage of Jackie working out and practicing various techniques with his friend, bodyguard and occasional co-star, Ken Lo.

For the summarisation of all the injuries Jackie has suffered over the years, the relevant scenes are shown. There is some behind the scenes footage such as Jackie having blood cleaned off him, or being carried away on a stretcher. Many of the accidents are shown in slow motion, leaving the viewer in no doubt about the pain Jackie Chan has suffered in the name of his art.

Jackie had a close relationship with his father Charles

Jackie and Sammo reunited with their master Yu Jim Yuen

Jackie is a prolific director as well as actor

As a biographical piece, “Jackie Chan My Story” is an entertaining insight into the life of Hong Kong’s biggest film star. In 1998, Jackie’s star was beginning to rise in the West, and this documentary would have been a good initiation into who he was, and what he is was all about.

Some of the photographs and footage of his early years are rarely seen, even today. There a hundreds of snippets of footage from a career that had spanned four decades. The only shame is that they are mostly just a couple of seconds long, but of course, if they had included more, this documentary would have run to several hours!

There are no great revelations about Jackie Chan’s personal life. In fact, the biggest revelations in his life came after 1998. A more detailed insight into the life he has led is in the book “I Am Jackie Chan”, which was published in the same year. The graphics and editing of the documentary is occasionally cheapish looking and very dated, and the narrator’s sense of humour falls flat more often than not.

However, as a summary of Jackie Chan’s career up until the point he broke into Western markets, this is essential viewing for fans of martial arts films and the main man himself!

A visit to Tianamen Square in Beijing 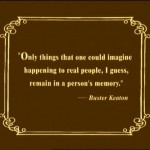