Zhang gets serious in The Grandmaster 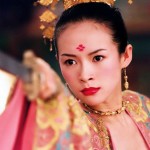 Zhang in House of Flying Daggers

Zhang in Hero before the leaves turn red!

Zhang doing it for the ladies in The Grandmaster

Zhang Ziyi was born in Beijing to Zhang Yuanxiao and Li Zhousheng. Zhang has always been physically gifted; she took up dancing and gymnastics at 8 years old and joined the Beijing Dance Academy at the age of 11. Zhang went on to win numerous awards as a child, including the national youth dance championship at 15 years old.

Despite being a talented dancer, Zhang decided to set her sights on an acting career instead, enrolling in the prestigious Central Academy of Drama. Zhang recalls, “it’s not that I wanted to be an actor, it’s that I didn’t want to be a dancer!” In 1998 Zhang auditioned for a shampoo commercial – directed by Zhang Yimou – unaware the commercial was being used as a preliminary audition for Zhang Yimou’s upcoming movie The Road Home (1998). Zhang impressed the director and subsequently landed the leading role playing protagonist, Zhao Di. The film won the Silver Bear award at the 2000 Berlin Film Festival and Zhang won the ‘best actress award’ for her performance at the Hundred Flowers Awards ceremony the same year.

Trailer for The Grandmaster

Zhang’s most defining role came soon after in the critically acclaimed martial arts film Crouching Tiger, Hidden Dragon (2000) – the film won a superabundance of awards as well as grossing $200 million worldwide and shot Zhang into stardom in the Western world. Surprisingly, prior to filming Crouching Tiger, Zhang hadn’t undergone any martial arts training, however her background as a former dancer and gymnast allowed for a smooth transition. However this transition came at the cost of numerous injuries during filming. Zhang’s transition into a martial artist and action heroine was further cultivated in her role as Mei in House of Flying Daggers (2004) and peaked as she underwent rigorous training – under the supervision of numerous kung fu masters – to play the part of Gong Er in The Grandmaster (2013).

Zhang’s intensity onscreen and resilient disposition has made her into a national treasure as well as an international star; she was once lauded as “China’s gift to Hollywood”; has appeared in countless magazines; and is the subject of a numerous high-profile endorsements.

On kung-fu and martial arts

Chris Tucker tries his luck against Zhang in Rush Hour 2!

Zhang, beautiful as ever in Hero

Zhang taking up her stance

On women’s influence in film

“I think kung fu films today are very different from kung fu films before. The Grandmaster is clearly a multi-layered film. Women play an important role. I think society has changed too, so I experienced this. I think I’m really lucky, my character has a line: she says, ‘Let’s be clear. You didn’t return it to me. I took it back myself!’ So I think the message is really strong and all the women can relate to her.”

“I think I treasure that part of this movie because first of all, in the film business there are not many parts like this for women. That’s just the reality. We have the ability, we work equally hard as men, why couldn’t we have better roles?”

“I want my roles to express those parts in the hearts of Chinese women that they feel unable to let out.”

Trailer for House Of Flying Daggers

“Whatever you see – any good results – are all from the pressure.”
“A movie has its own fate, which often doesn’t depend on the performances of the director and actors.”

Mo is a writer from Liverpool, England who loves art in all of its many forms and attributes the root of his passion for martial arts to Bruce Lee. He's a graduate in English Literature and is currently learning Japanese. Mo began practicing kung fu and plans to take up Muay Thai and/or Silat in the near future.