Anyone who believes that Netflix hasn’t been absolutely spoiling us lovers of martial arts action over the last year or so is clearly in need of an eye exam.

Beginning with an admittedly bittersweet wrap-up for the platforms of various Marvel series‘, that was soon followed by Timo Tjahjanto’s (literally) cutthroat blend of martial arts action and horror movie levels of gore, “The Night Comes For Us”, which was swiftly followed by Bruce Khan’s island prison smackdown “Revenger”, and the Filipino actioner “Maria”.

Since last fall, the trend has been clear – some of the world’s purest, most sublimely riveting martial arts action is now coming courtesy of Netflix. That trend has continued apace with Netflix’s supernatural martial arts series, “Wu Assassins”. Half urban gang drama and half supernatural fantasy, “Wu Assassins” is ten episodes of pure action nirvana for action and Asian mythology aficionados alike.

Meanwhile, the power of the elements are further embodied by Summer Glau, Kevin Durand, and Travis Caldwell in the roles of Miss Jones, James Baxter, and Gideon, or the Water, Earth, and Metal Wu’s, respectively.

Kai aspires to be a world class chef

Kai struggles to learn the ways of the Wu Assassin

In the heart of San Francisco’s Chinatown, Chinese-Indonesian immigrant Kai Jin aspires to become a world-class chef, but finds his dream held back after a gang badly damages his food truck. Kai also eschews the prospect of joining the criminal empire of his adoptive father, Uncle Six, a powerful player among the local Triad.

Kai’s good friend, Lu Xin Lee offers moral support, while also holding an olive branch out to Kai with his own Triad connections, but Kai prefers to remain a straight arrow.

However, Kai’s life swiftly changes when he is suddenly whisked away to an otherworldly realm and endowed with the power of the “Wu Assassin”. Kai’s newfound supernatural abilities grant him a warrior’s might that he never thought possible, but he also finds himself tasked with stopping five crime lords known as the “Wu Warlords”, each carrying the power of a different element.

While Kai is reluctant to become a tool for assassination, he soon discovers the importance of the mission imposed on him when he realizes that Uncle Six is one of the five Wu Warlords, with each of the other four being in hot pursuit of an elemental power known as the “Wu Xing”. 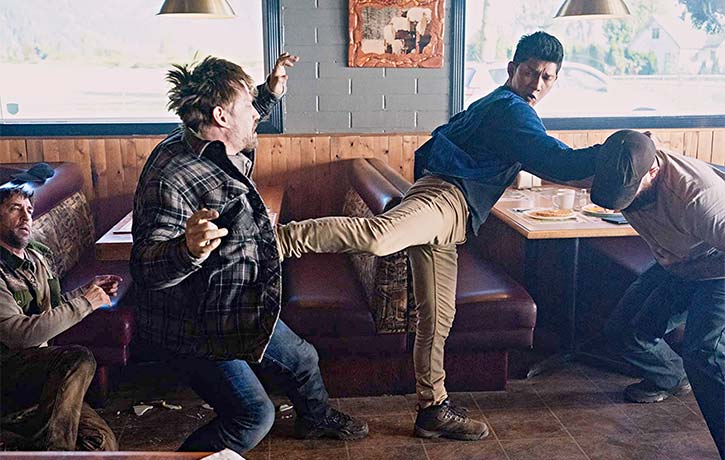 Kai catches his enemy off guard

Kai gains power over the elements as the Wu Assassin

Kais about to become the Wu Assassin

“Wu Assassins” wastes absolutely no time in showing the audience what they’re in for, kicking things off with a hallway battle in Kai’s apartment. Getting the action rolling less than a minute into the first episode, the blazing hallway brawl (which gets an even juicier continuation later in the same episode) both sets the bar high for the rest of the season, and shows just how much of an influence “The Raid” has had on Netflix’s action heavy shows.

Equally influential on “Wu Assassins” is Nickelodeon’s “Avatar: The Last Airbender“, with its incorporation of the elements into a martial arts fantasy. In some respects, “Wu Assassins” feels like an effort to transplant the supernatural, elemental-based action of “Avatar” into an urban crime thriller with a decidedly mature audience in mind. That’s hardly to say that the show is lacking in originality, but its nevertheless sure to please “Avatar” fans and fans of the more merciless, R-rated action – which, given the chasm that exists between those two demographics, is a lot harder than it sounds. And “Wu Assassins” really knows to get the most bang for its buck with its supernatural elements.

Among Kai’s abilities as the Wu Assassin is the power to assume the likeness of one of the 1,000 monks whose power he now channels, leaving his opponents to see the face of Mark Dacascos as the one pummeling theirs. That certainly leaves the third episode to end on quite a cliffhanger, with the fourth immediately diving right into Uncle Six cutting loose as the Fire Wu. Byron Mann really plants his flag as Uncle Six, a boss as smooth a criminal as he is cold-hearted, but who also proves to be one of the most morally ambiguous characters of the show.

Kai faces off with Uncle Six

Kai gets this opponent unawares

He and Iko have excellent chemistry as a surrogate father and son butting heads over what the latter wants to do with his life. Indeed, Kai may be one of the most sympathetic protagonists Iko has ever played, a guy just trying to mind his own business, finding himself caught in a tug of war between otherworldly forces of good and evil beyond his understanding. And let “Wu Assassins” be a lesson in the value of patience being a virtue – twenty-five years after “Street Fighter: The Movie“, and in the role of the Fire Wu, Byron Mann finally gets to blast off a real Hadouken!

The show also doesn’t take long to set up JuJu Chan as the show-stealer, in her role as Uncle Six’s right-hand woman, Zan. A killing machine of few words, Zan springs into action like a lurking panther against Uncle Six’s designated targets, and proves to be a far more bloodthirsty villain than her employer. Few assassins have seen an action scene given better build-up than Zan strolling into an office building on bladed stilettos to a French cover of “These Boots Are Made For Walkin'” as a soundtrack.

Viewers will debate heavily which of the four additional Wu Warlords are the personal favourites, but I particularly dig Kevin Durand’s Earth Wu, and the challenge he gives Kai in trapping his feet in the ground in their doozy of a face-off.

Kai fends off his opponents attack

Tommy Flanagan’s Alec McCullough additionally makes a simultaneously sinister and tragic adversary as the Wood Wu, even if he’s a somewhat more henchmen-reliant evildoer. Lewis Tan is also a delight as the morally grey and energetically charismatic Lu Xin, and he’s an absolute bolt of lightning in his electrifying action scenes, particularly when he and Iko battle waves of henchmen at an abandoned factory.

With its heavy steeping in Asian mysticism, the finale “Wu Assassins” also wraps things up with a climax that delivers the martial arts action that viewers crave, while offering a much more emotionally harsh resolution than many will probably expect – amid teasing that the Wu Assassin’s work is never truly done.

With ten episodes blending martial arts and metaphysics, “Wu Assassins” firmly establishes itself as the place to flock to on the small screen for lovers of action and Asian culture alike. Iko Uwais steps into his most superhuman and simultaneously most underdog role yet, Byron Mann and Lewis Tan engage as morally opaque Triad up-and-comers, JuJu Chan keeps you on the edge of your seat as a villainess as charming as she is vicious, and the fight sequences absolutely rule the roost. Netflix has spoiled us martial arts aficionados for the last year, and with “Wu Assassins” now in that equation, they seem intent to spoil us rotten! 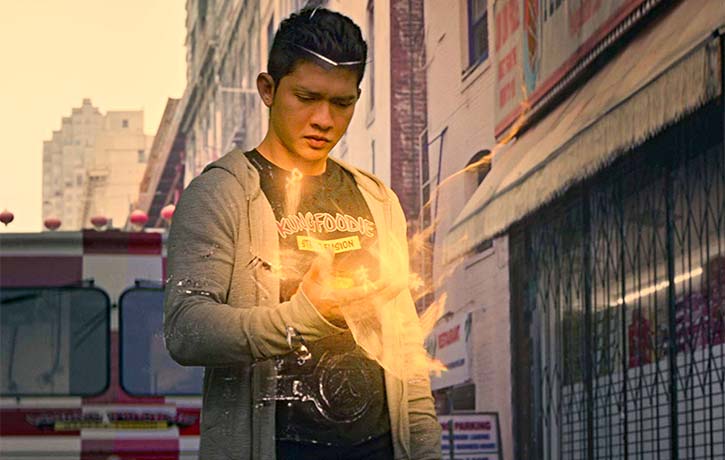 Kai is endowed with the power of the Wu Assassin

Zan unexpectedly drops in for a visit on her foes

Uncle Six rules over Chinatown with an iron fist

“Wu Assassins” is now streaming on Netflix. Have you seen “Wu Assassins”? What are your thoughts on the show’s metaphysical and supernatural elements and martial arts action? What are some of your favourite martial arts films with a supernatural twist? Let us know in the comments below; Like, share and join in the conversation on Facebook and follow us on Twitter & Instagram.

For more META-fu, dive into the WU-niverse of movie reviews, these Top 10 Iko Uwais Movie Fights, be sure to collect your exclusive KFK gear, and subscribe for more martial mayhem on YouTube!