Prior to his career in directing the “John Wick” franchise, Chad Stahelski spent over twenty years as a professional stuntman, lending his talents to action hits such as “The Crow”, “The Matrix”, “Spider-Man 2”, “300”, “Ninja Assassin”, “The Expendables” 1 and 2, and “Man of Tai Chi”, among many others. I bring this up to make the case that it should now be required by state, federal, and international law for anyone directing action movies to have an extensive background in professional stunt work. There’s certainly little reason to argue the point after seeing “John Wick: Chapter 3 – Parabellum”, a two-hour opera of the most wild and outlandish action the series has ever served up, and one that absolutely defines “edge-of-your-seat” entertainment!

Keanu Reeves steps back into the role of the world’s most feared assassin, John Wick, with Halle Berry assuming the role of Sofia, an old associate with a bitter grudge against him. Ian McShane also returns in the role of The Continental’s manager Winston, with Lance Reddick also back as its concierge Charon. Laurence Fishburne also reprises the role of The Bowery King, while Anjelica Huston appears as another old ally of John’s known as “The Director”. Asia Kate Dillon portrays an emissary of the assassin world’s hierarchy known as The Adjudicator, while Mark Dacascos tackles the role of her hand-picked assassin Zero, with Yayan Ruhian and Cecep Arif Rahman on hand as his two right-hand men.

John Wick roams the streets of Manhattan a marked man

After violating the sacred rule of conducting no “business” on the grounds of The Continental, John Wick navigates the streets of Manhattan as a marked man with a $14 million bounty on his head. After leaving his loyal dog in the trusted care of The Continental’s concierge Charon, John Wick makes his way to Casablanca to cash in his “marker” on his one-time associate, Sofia. Despite the bad blood between the two, Sofia agrees to help take John to “The Elder”, one of the senior most members of The High Table of the assassin world, with the power to cancel the contract on his life. However, with an “adjudicator” and a troupe of hired assassins nipping at his heels, John soon learns that this will come at a steep price.

John Wick breaks a man’s neck by punching his head against the edge of an encyclopedia. He later joins forces with an old ally to blast their way through a Moroccan mansion while her two dogs maul anyone lucky enough not to get riddled with bullets. He subsequently goes head-to-head with two kerambit-wielding Silat masters from “The Raid” films. If you believe those few sentences describe more than ten percent of the symphony orchestra of action that is the third film in the “John Wick” franchise, you are sorely mistaken. However, what they do highlight is the modesty with which the series began with the 2014 original.

“John Wick” is unquestionably one of the best-scripted action movies ever made, crafting a hidden world of assassins with its own language, currency, and infrastructure (along with its own legal system, as we see embodied by The Adjudicator in “Parabellum). And yet, all of that was revealed gradually throughout, with the foundation being laid in its opening minutes; the story of a widower grieving the loss of his wife with the dog she left behind for him, before we see his return to the world he escaped from, and just how good he was at his old job as he finally comes out of retirement. 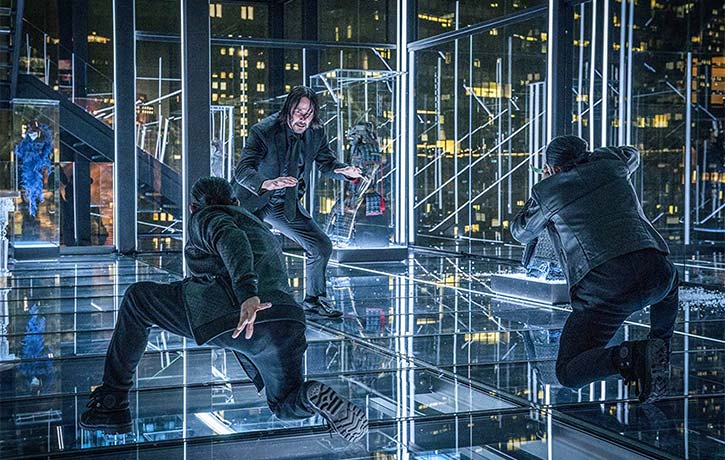 John cashes in a favor from The Director

John flees his enemies on horseback

Add in a cocktail of some of the most amazing gun fu in any movie not directed by John Woo (and quite arguably even counting those that were) and “John Wick” arrived as the definition of a sleeper hit. It wasn’t until 2017’s “John Wick: Chapter 2” that the series really put its cards on the table, expanding the scope of its world-building whilst ramping up the finesse and intensity of its action sequences to eleven.

However, “Parabellum” might well represent the biggest quantum leap forward any action franchise has made from its first installment to its third. In the 131 minute runtime of “Parabellum”, there are gun battles that resemble a “Terminator” movie starring Chow Yun-fat, vehicular stunts worthy of “Mad Max: Fury Road”, and martial arts action sequences that consistently top each other. If “Mission: Impossible – Fallout” was the undisputed king of the action movie hill for summer 2018, “John Wick: Chapter 3” assumes that particular throne with ease for this year’s summer movie season.

Picking up right where its predecessor left off, “John Wick: Chapter 3” wastes no time whatsoever in serving up everything it has to offer on a silver platter, with John holding off swarm after swarm of his fellow assassins after the bounty on his head. There are action movie finales that aren’t as strong as these opening twenty minutes, which see John’s aforementioned encyclopedia neck break, a horse stable smackdown with a little equestrian foot combat, a motorcycle-horseback chase, and what is sure to be a contender for knife fight the year (a title for which “Parabellum” has no fewer than two entries). As if the movie feels dared by the audience to push the envelope even further, John’s subsequent alliance with Sofia pits the two against the entire security detail of a Moroccan kasbah, with Sofia’s two dogs leaving the family jewels of more than a few of their enemies in less than pristine condition.

Halle Berry clearly threw herself head first into martial arts and ballistics training just as much as Reeves did, and the bad blood that exists between Sofia and Wick is only the latest bit of untapped history that this franchise knows how to deftly tease the audience into wanting to see fully explored. And yet, “Parabellum” has STILL saved the best for last. Virtually the entire latter half is a non-stop cavalcade of the movie outdoing itself with a combination sword fight/motorcycle chases that lovingly pays tribute to the South Korean actioner “The Villainess”, and a shotgun battle that turns the usually off-limits grounds of The Continental into a war zone, culminating in Mr. Wick’s last stand against Zero’s gang of blade-wielding fellow assassins.

The Adjudicator arrives to assess the situation

John comes to Sofia for aid

If “Chapter 2” tipped its hat to “Enter the Dragon” with its Hall of Mirrors set piece, “Parabellum” homages “Police Story” with John’s opponents sending him through one window or glass case after another, and his absolutely stunning rodeo with Yayan Ruhian and Cecep Arif Rahman providing the film’s aforementioned second entry into the Best Knife Fight of 2019 sweepstakes. Mark Dacascos also works his reliable charisma in the role of Zero, a man with such respect for his legendary target that he all but asks for his autograph before unsheathing his katana. And based on the audience reaction, it’s fairly easy to tell which viewers have never seen “Only the Strong” or “Drive” – quite the sweetener of the theater experience, indeed!

To see the “John Wick” series unfold from its humble, yet thrilling beginnings, from its maiden voyage to the heights it rises to in “Parabellum” has been nothing less than an electrifying thrill, and a genuine privilege for hardcore action aficionados. With a script and direction that are razor sharp, and a leading man and cast totally committed to blowing your expectations out of the water, the crown of summer 2019’s reigning king of action is Baba Yaga’s to lose – and judging by the ending of “John Wick: Chapter 3”, that’s a title he aims to keep!

Zero comes to the battle with great respect for John Wick

Sofia has an unsavory history with John Wick

John remembers the life he once had

Have you seen “John Wick: Chapter 3”? What are your thoughts on the film’s whiplash-thrilling action sequences? Now that “John Wick: Chapter 4″ is greenlit, how do you think the plot and combat will unfold? Let us know in the comments below; Like, share and join in the conversation on Facebook and follow us on Twitter & Instagram. Step onto The CONTINENT(AL) of FU housing exclusive interviews like these with “John Wick: Chapter 3” fighters Tiger Chen and Jon Valera, these Top 10’s, get your Official KFK merchandise, and subscribe for more exciting, action-packed videos on YouTube!