The Raid is a no nonsense entry into the martial arts action film canon. Surgically paced, frenetically shot, this film packs punches that will require re-watches to ensure you’ve fully soaked-up all that is on offer. Pencak Silat is the Indonesian martial art on display here combining the self-defence and performance aspects along with various use of weaponry that will be a staple of the squad charged with entering the tower for: “The Raid.”

Iko Uwais stars as Rama, a rookie officer in an elite police unit tasked with carrying out the raid alongside fellow cop Jaka played by Joe Taslim. Both are part of the silver-haired, squad lead by Wayhu (Pierre Gruno).

Ray Sahetapy stars as the boss – Tama, while Yayan Ruhian is Mad Dog the boss’ lieutenant who causes havoc and distributes mayhem for the officers on the job.

Welsh Director Gareth Evans is behind the lens of this Indonesian actioner, which utilises the star Iko Uwais who choreographs the moves alongside the talented fighter, Mad Dog – Yayan Ruhian. The film displays both standout set pieces and action that is realistic, brutal and not just the showy stuff – as we’ve gotten used to in martial arts movies! 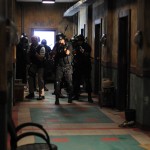 Brothers talk it out..

A forboding view of the target tower block..

The drug baron Jama runs a formidable operation from one of Jakarta’s mega slums from atop the imposing tower where The Raid is set to commence. An elite force of policemen are charged to enter, ascend and take down Tama but he’s ready and prepared as are some of the residents, who will be rewarded for aiding the SWAT team’s demise.

Amongst the team is the rookie Rama; he wakes, he prays, he greets his wife and the unborn child she’s carrying before scenes of training are inter-spliced with him preparing his weapons for what will not be ‘just another day at the office’!

Tama’s day has started too. This criminal flipside is introduced to us as he casually chomps on his breakfast while 5 men kneel, bound and gagged before he calmly executes each one before his gun jams. This guy means business…this scene gives a taste of the terrors that await.

It’s everywhere! Bar the introductions and theme setting, The Raid is non-stop in terms of tactical moves, fighting and general crazy-as-hell stunts. Most of the time you wince at not just the fast-paced punch-ups and kick offs that ensue but the fact you know the stunt team really pushed themselves to maintain that stamp of authenticity and realism and they would definitely be hurting the next morning… and the next… and the next!

Within 10 minutes the first bad guy is down, emerging from a darkened corridor a garrotte awaits him. It’s from here on out that things kick-off…massively!

Mad dog goes out of control..

Lets take him out

Elite police on their way to raid mission

The team need to go from floor to floor. So we are indirectly given a countdown (or a count-up to be precise) before we reach the ‘level-end’ boss at the top. A few floor numbers are shown. 2… 3… 4… and it is on floor 5 we’re confronted with a snoozy kid, that causes beads of sweat to grow then fall from the team’s collective brow. He runs-off before alerting another lookout that ‘we have company!’ before a bullet cuts him down. The next 25 floors will indeed be hell as the scream of “Police!” echoes through the building’s atrium.

Snipers, flexible captives taking out cops with machetes, their armoured van being given a bullet bath all escalate the tension as the cops realise they are really in for it with no easy way out now…

Various camera angles give us a varied view of the claustrophobic combat that takes place; from above, below, side-on and especially a standout ‘through the floor’ piece that warrants a mention.

As the squad numbers are terminally discharged, it’s Rama our hero who takes charge, of course, and his end battle with Mad Dog is surely something to watch and rewatch a few times!

Though traditional Indonesian fighting methods are used, tactical weapons training was provided for all squad members. In the haze of combat you’ll see Thai Boxing, close quarter combat techniques and of course Pencak with elbows, knees, throws, joint manipulation and weapons all being chucked in as baddie after baddie is dispatched in an athletically intense fashion.

Rama played by leading man Iko Uwais hears a terse briefing of the mission on the way..

Rama unarmed and ready for more..

Matt Flannery and Dimas Imam Subhono keep the tension on the boil as the directors of photography keep the action close and in your face. The building itself has an imposing character with its dark, dank corridors something recently repeated in Dredd 3D and contrasted with the “In The Walls” segment of The Matrix. The constant claustrophobia puts us in the squads’ shoes as well as providing close-up action and the odd flashback to Oldboy’s now infamous corridor scene.

The Raid has a simple plot. The action is well-paced and entertainingly realistic. This Welsh-Indonesian partnership between director, film makers and the star Uwais has reminded the rest of Hollywood how to construct something that’s short on hyperbole and simply has the task of adrenalizing (entertaining) the viewer from start…to brain-splitting finish!

Chi is a serious movie buff, content producer and Krav Maga Instructor. He gets to do all these things by being brutally "ninja" with his time management while sipping on the tears of his enemies!! :O