Andy and Lana Wachowski have always been synonymous with breath-taking, eye-popping visual effects and stylish, innovative filming techniques. Here they bring on a flair for stylised dark and moody storytelling. They simultaneously bring a rising young star to fame with impressive results in this beloved cultish ninja movie. Ninja Assassin” also featured in our Top 10 Ninja Movies.

Former Korean boy band member Rain, plays Raizo a skilled ninja warrior who as an orphan child was accepted into the Ozunu clan and trained as a ninja; now he seeks revenge for his clan’s actions. Martial arts screen legend Sho Kosugi makes a welcome return to the big screen as Lord Ozunu hunting Raizo for betraying his clan.

“Man with the Iron Fists” star Rick Yune plays Ozunu assassin Takeshi with whom Raizo has a score to settle.

Disillusioned ninja warrior Raizo, seeks violent retribution against his former mentor Lord Ozunu and teams up with a Europol agent to bring down his former clan.

Ninja waiting in the shadows

Raizo sharp with the ninjato

The Wachowskis spearheading a mystical ninja story promises and delivers some stylish shock and gore with an opening segment setting the tone for the film’s bloody yet stylish ultra-violent action.

The film has a sleek and moody feel embodying the heavy textures of a graphic novel. Yet scrutinising eyes would no doubt fall on the film’s star, Rain in his first and only martial arts role in which he doesn’t disappoint. His training under the film’s team of fight and stunt co-ordinators clearly paid off. Sporting a lean and well defined physique, Rain looks every part the purposeful warrior with some amazing skills to boot.

Although the plot is basic, splitting the film’s first half between the present and Raizo’s heartfelt and sad backstory works effectively. The film capitalises on the ninja mystique, showing them in flashback, undergoing a sadistic, hardcore training regimen, from a young age that would make the Spartans of “300” look wimpy. In the present day the ninja’s powers are embellished to reinforce that mystique showing them at their most limber and unforgiving. One scene in a warehouse sees a SWAT team slowly look up to see ninjas emerging from the dark uttering chilling whispers then unleashing a barrage of CGI shurikens cutting the team down into pieces.

Raizo shows off his shogei skills 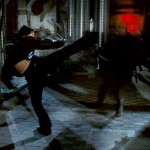 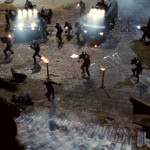 Mayhem as shuriken fu rains down on SWAT team

Mika to the rescue

The fight choreography itself features predominantly classic fast-paced wushu moves that are exhilarating and dynamic. Scenes featuring Raizo twirling and swinging a lethal looking shogei as well as a pair of ninjatos are jaw dropping and with a touch of slo-mo, look almost supernatural. Each fight scene is bigger than the last right up to the storming of Ozunu’s compound. Europol SWAT teams and ninjas showering each other with bullets and steel shurikens is exciting yet overshadowed by the anticipated showdown between Ozunu and Raizo. This moment could have been a little longer as Kosugi alone was great to watch both for his thespian and martial skill but seeing him in a Hollywood action film again is worth the DVD purchase price alone.

If you like your ninja action served on a dramatically moody-broody plate with a generous side order of body parts smothered in blood, then this is the film for you! “Ninja Assassin” is light on substance yet heavy on style -the Wachowskis excel in mood and in style here, which is part of the film’s charm.

There is plenty of martial arts mayhem flowing as frenetically as the film’s blood and body parts, with some humorous macabre moments thrown in for good measure. The actors carry the film as does the fight action, and Rain makes an excellent brooding ninja. So, grab the popcorn, switch off the lights (and the brain) turn up the sound on your AV system and enjoy a visceral treat!

Takeshi gets all choked up over Raizo

Father and son face off

Ninjas in the rafters waiting to pounce

Raizo has a near miss with a flying shogei