Martial Art of the Month: Silat

Welcome, readers, to the newest feature here on KFK – our Martial Art of the Month column, where we take a look at the history and techniques of a particular system of martial arts and give you a crash course on what it’s all about! For our inaugural Martial Art of the Month, we’ll be zeroing in on a discipline of combat that has seen a veritable exposure surge in popular culture (i.e. with “The Raid” movies, “Yasmine” etc) in the last half decade – the exotic art of Silat. Check out the video below for a quick dynamic demo by stuntman and Silat exponent Dawid Szatarski!

While most martial arts can have their origins pinned down to one specific nation, Silat (which roughly translates to “fighting skill”) is unique in that it is identified with a region, the Malay Archipelago to be exact. As such, the term “Silat” forms an umbrella for the combat styles of the region, but is very often elaborated upon when pinpointing the Silat of specific nations. For example, Indonesian Silat is referenced under the full name of “Pencak Silat”, while Silat originating from Malaysia and its adjacent neighbors is referred to as “Silat Melayu”.

The origins of Silat are hard to nail down, as much of it relies on oral tradition. However, there is evidence to suggest that it may have some connection to the combat styles of ancient Persia, as Dr. Craig D. Reid explains in his 2014 Black Belt Magazine article, “Star of Pencak Silat”:

“Chinese diplomats are believed to have visited Persia as early as 126 B.C. Later, Persians began practicing a martial art called varzesh-e pahlavani. By 226, Persian explorers had established trade routes to the islands that form the Malay Archipelago. For the next 500 years, Arab Muslims conducted business there. Silat is believed to have originated between 600 and 1200, when the Srivijava kingdom was a major force in the region. The fighting art underwent refinement during the Majapahit Empire (1293-1527).” 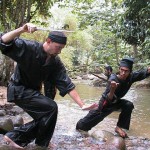 The kerambit the deadly dagger of Silat

Students unite behind their guru

Mastering the fundamentals of Silat

Silat also shares some overlap with Chinese martial arts, specifically the art of Kuntao, a discipline of kung fu formed and practiced by Chinese immigrants to Indonesia. It isn’t uncommon to see similarities between the two, and even for different schools of Silat to blend elements of both. Silat also has a similar predilection towards adapting the movements of animals to suit the needs of combat, such as in “Silat Harimau”, which adapts the movements of the tiger. Stuntwoman, actress and Silat practitioner, Cecily Fay laid out some of the animal influences on the art in her interview with KFK:

“Harimau itself has a lot of vicious aspects used in real life combat like ripping ears off. There are locks and breaks used for example with fingers in the oesophagus, there are power blows but also multiple striking called Pukulan that are short set-ups for chokes and lots of devastating moves. There are also other Indonesian animal styles within this system including buaya – crocodile used in ground attacks, crushing cobra – chokes, and concepts and vehicles for ways of moving fluidly like kucing – cat. It’s rather like learning the alphabet, once you know it, you can form words, put sentences together and just express yourself. So you learn all the different concepts, practice, then combine them.” – Interview with Cecily Fay

With the combination of the often uneven terrain of the Malay Archipelago and the influences of the animal kingdom, Silat has a noticeable emphasis on much lower stance work than most other martial arts. This serves to facilitate a wide range of techniques from strikes to takedowns, which you can see in the video below featuring Silat guru Eric Kruk.

Of course, stance work plays a vital role in every martial art, and it is the stance work within Silat that enables practitioners to transition from one facet of fighting to another with tremendous versatility. Filmmaker Gareth Evans, creator of “Merantau” and “The Raid” films, has frequently commented on being impressed with the fluidity of Silat and its adaptability to both an open environment and tight spaces, something he made very sure to capture on camera for the whole world to see!

And, like many martial arts, Silat isn’t only concerned with unarmed combat, with some of the most exotic bladed weapons known to man being at its disposal. The machete-like parang, the curved sickle known as the sabit, and a wave-like sword called the kris are just a few of Silat’s deadly blades of war. However, without a doubt, the signature weapon of the art is the insidious dagger known as the kerambit. One of the surest blades to have by your side in combat, the hilt includes a ring fashioned into the very end that the user slides his or her index finger into to prevent them from being disarmed. It also facilitates the underhanded grip on the blade that the user adopts, and with the distinct curve of the blade itself, the wielder can attack the opponent from angles that are much more difficult to defend against. It’s most certainly not a blade you want to be on the receiving end of, as you can clearly see from the final fight of “The Raid 2”!

Silat practitioners you may know

When talking about famous Silat practitioners, a few names that go without saying are, of course, Iko Uwais, Yayan Ruhian, and Cecep Arif Rahman, and it’s through their performances in “Merantau” and “The Raid” films that Silat has become front and center in martial arts popular culture today, so much so that all of them would go on to appear in “Star Wars: The Force Awakens”! Naturally, Cecily Fay is also one of the Silat exponents to bring it into a wider exposure, and her command of the art is noteoworthy, as you can see in her performance of a Silat seni below.

Of course, one of the most consummate masters of Silat in the world also happens to be one of the great modern legends of martial arts – none other than Dan Inosanto, famed disciple of the legendary Bruce Lee!

That about wraps up KFK’s first ever Martial Art of the Month. Stay tuned for next month’s column, and well, what the heck – we’ll go ahead and throw one more generous helping of blistering Silat action at you (not for the squeamish though, you have been warned) enjoy!

I Am Jackie Chan: My Life in Action