Keanu Reeves returns as the dog-loving hitman “John Wick”. Just as he did for “The Matrix”, Reeves put in weeks’ of preparation, training in Jiu-Jitsu, “car fu” and tactical weapons handling for the intricate action scenes.

Known as the “Italian George Clooney”, Riccardo Scamarcio stars as the Machiavellian crime boss “Santino D’Antonio”. Following on from his action role in “Suicide Squad”, rapper and actor Common plays “Cassian”, a lethal and loyal bodyguard to Santino’s sister, Gianna.

Keanu really knows how to handle the fireams

“Enter the Ninja” star Franco Nero plays “Julius” the manager of ‘Il Continentale’ in Rome. Italian actress and model Claudia Gerini plays the beautiful but deadly “Gianna D’Antonio” whose ruthlessness has seen her rise to the top of a sinister crime syndicate.

Returning from the first movie are Ian McShane as “Winston”, the owner of the Continental Hotel that “manages” the assassins, John Leguizamo as “Aurelio”, the owner of a high-end chop shop, Lance Reddick as “Charon”, the concierge at the Continental Hotel, David Patrick Kelly as “Charlie”, the cleaner, Thomas Sadoski as “Jimmy”, a police officer and friend of John’s and Bridget Moynahan as “Helen Wick”, John’s deceased wife.

The Continental is cover for a secret society of assassins dating back centuries that is ruled by an unforgiving code. There are two rules at the Continental: 1. No business is to be conducted on Continental ground, and 2. All markers must be honoured. Unfortunately for John Wick, his retirement from the shadowy world of assassins is violently interrupted, as he owes such a marker to a very dangerous old acquaintance. Santino D’Antonio wants John to repay his blood oath by killing his own sister Gianna. Santino wants to replace his sister who inherited their recently deceased father’s place at the High Table, a powerful crime syndicate. Left with little choice, John travels to Rome to hunt down Gianna. The consequences of his mission however make him a bigger target than he has ever been.

Bridget Moynahan is back as Helen Wick

With a nice nod to Buster Keaton and the silent stunt stars of old, the action kicks off from the first frame. The tone and high standard is instantly set with a bone-crunching car and motorcycle chase. This isn’t just any old Hollywood car chase though, every skid, wheelspin and crash is as beautifully choreographed as the impressive hand-to-hand combat and shoot outs that follow it.

Keanu Reeves put in hours of training in martial arts, weapons skills and stunt driving for this film. It means he is always front and centre of the action and it allows for luxuriously long takes as he lays waste to all around him (check out these Top 5 fights from the first “John Wick” and the sleek online magazine CQ – “The Continental Quarterly” if you’re curious to see what goes into an assassin like John Wick’s workout).

Keanu is always front and centre of the action

Lance Reddick is especially good in an expanded supporting role

Santino and Ares need to tie up loose ends

As the plot unfolds, John Wick heads to Rome to reluctantly “pay his marker”. The assassin’s mythical underworld is wonderfully expanded upon with his arrival at the “Il Continentale” hotel. Veteran star and the original Django, Franco Nero has a great guest appearance as Winston’s Italian counterpart Julius. We get to see the inner-workings of the syndicate as John Wick gets fully kitted out for the mission at hand. The pay-off is an epic extended sequence of John Wick’s particular brand of surgical brutality as he makes his way through a rave at Rome’s ancient Baths of Caracalla and the catacombs below. Even though much of the action takes place in dark locations, it is superbly and atmospherically lit so we never miss a beat.

With barely a pause for breath, the blades join the firearms for some close-up hand-to-hand combat including some very realistic tumbling down cobbled streets and stone staircases!

With Wick’s return to New York the stakes are raised even higher when a bounty is placed on him. It feels like the whole of the city is after Wick as Keanu has one of the most action-packed commutes you’ll ever witness.

One of the weaknesses of the first film I felt was the rather under-whelming finalé. There is no such inconsistency here. In something of a homage to the Bruce Lee classic “Enter the Dragon”, John Wick stalks his prey through an ever-changing hall of mirrors. It is filmed very cleverly and with the mirrors being incorporated into the action and also serving as a simple metaphor for the lead characters.

Ian McShane is back as Winston

Riccardo Scamarcio as the slick Santino

The original “John Wick” was a pleasant surprise when I first saw it and has grown to become one of my favourite action films. It felt like it was made by action fans for action fans, which it effectively was, with veteran stunt performers Chad Stahelski and David Leitch at the helm.

There are few sequels that genuinely surpass a successful progenitor. “The Godfather: Part II” or “Star Wars: The Empire Strikes Back” are considered two rare examples. “John Wick: Chapter 2” successfully manages to expand on everything that was right about the first film and more or less eradicate its flaws, which were few.

The mayhem is captured superbly, with none of the nonsense-shaky cam that has plagued so many action films in the new millennium. The excellent sound design makes the audience feel the impact of every bullet strike and snap of every bone. With the exception of The Raid films, screen violence has never looked and sounded as stylish as it does here.

The framing lighting pacing and editing is all top notch

Do not under estimate the deadly Ares

He still wants his car back

Laurence Fishburne reunites with his co star from The Matrix

The intricacy and beauty of the choreography elevates the action sequences to more than just a shoot-out. The framing, lighting, pacing and editing of them would make even the maestro himself, John Woo drool. The choreography of each action scene never feels contrived or as if the actors and stunt performers are just moving from one pre-set of rehearsed moves to the next. Combined with a smart choice of soundtrack and Keanu performing most of the action himself, it all results in a gorgeous “Symphony of Violence“.

Keanu Reeves’ performance is perfectly balanced as the stoic, reluctant yet relentless assassin, who at the heart of it all, is a grieving widower. When the action scenes call for it, he looks completely natural throwing down MMA moves or handling an assault rifle. His supporting cast all give good accounts of themselves, especially Lance Reddick and Ian McShane. Riccardo Scamarcio is a slick “boo-hiss” bad guy, and I expect to see him being courted for similar roles in the future.

Keanus expression says it all trouble

Keanu Reeves is back as the dog loving assassin John Wick

As Cassian, Common proves to be Keanu’s equal when it comes to delivering the rough stuff. On the evidence of his physical performance here, he has the potential to be an action star in his own right. The climax to this movie is much more satisfying; intense and nerve-racking than the original, which raises a whole host of trouble and limitless possibilities for further chapters in the John Wick story. If they are as classy as this one, I hope there will be many, many more to come. Chad Stahelski, David Leitch and the team at 87Eleven Action Design set a new standard for non-Asian action movies with the first film. With this sequel, they just raised it. Every single action sequence is bold, bruising, brutal and brilliant! “John Wick: Chapter 2” is an intense action masterpiece, a non-stop adrenaline rush from start to end -an absolute must-see for action junkies!

“John Wick: Chapter 2” opens in theatres tomorrow in the U.S. with previews next Tuesday 14th in London and everywhere on Friday 17th! Find out more by visiting this superb John Wick: Chapter 2 dedicated site, (get movie tickets, win a trip to Rome plus info on the exciting Virtual Reality game “John Wick Chronicles”) and of course the Facebook and Twitter pages!

The hall of mirrors is cleverly filmed

A suit in Italian styling with tactical lining

One Hitman and His Dog

The action is bigger bolder and better in this sequel

Assassins live by the Continental Code or pay the price 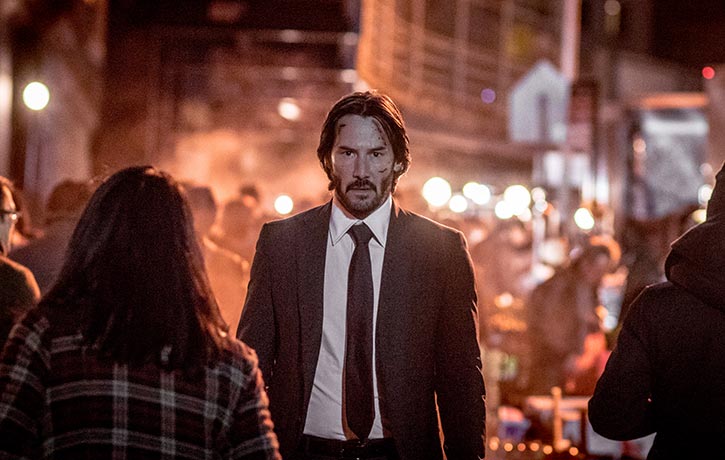 Back in New York the stakes are raised even higher