Martial arts films are often dismissed by those apathetic to the genre as little more than characters trading blows for ninety minutes and are only enjoyed on the most puerile level possible. One film that’s clearly on a mission to debunk that blatant prejudice is “Man of Tai Chi”, the directorial debut of Keanu Reeves.

With the help of his long-time friend and stuntman, Tiger Chen and legendary action choreographer, Yuen Woo-ping, Reeves makes for an invigorating freshman filmmaker, indeed, crafting a film that uses it’s plentiful, near-ceaseless martial arts action as a vehicle to advance a modern day saga of one man’s decision to effectively sell his soul in order to save his beloved Tai Chi temple and the consequences it has on both his peaceful fighting style and his personal life.

Stuntman Tiger Chen portrays the titular Man of Tai Chi, who shares his name, and on the basis of this film, Chen is a serious contender to watch for on the action movie scene. Like Jet Li or Tony Jaa, his unassuming stature and modest, soft-spoken temperament conceal a warrior with the strength and speed of a panther. His character’s emotional spectrum throughout the film ranges from a placid tranquility to merciless ferocity, and Chen is a master of taking his fighting skills to either extreme, as well.

In addition to tackling directing duties, Keanu Reeves also portrays the film’s main villain Donaka Mark, a shadowy business magnate with an almost satanic ability to entice desperate men with the promise of great riches, though up until the third act, Reeves spends considerably less time onscreen than many viewers will likely expect.

In addition to a multitude of highly skilled martial arts masters, the cast is filled out by veteran Hong Kong actor Simon Yam as Sun’s commander Wong, Korean pop-star Steve Yoo, who would later be seen opposite Shi Yan Neng in “The Wrath of Vajra”, as a mole planted into Donaka’s operation by Sun, and most notably rising action star (of The Raid 1 & 2) Iko Uwais as Silat master Gilang Sanjaya.

You dont scare me Ive dealt with Mad Dog

What you do when The Heimlich Maneuver fails…

Tiger Chen works as a delivery boy in modern Beijing, but he transforms into a powerful yet peaceful fighting machine under the tutelage of Master Yang, who has passed onto Tiger the ancient Ling Kong form of Tai Chi. Tiger argues to his sifu the merits of a hard, power-based approach to their art, but Yang extols the virtues of the finessed, classical use of Tai Chi, and admonishes Tiger to control his Chi and not the other way around.

While Master Yang believes that there is nothing to be gained in competitive fighting, Tiger disagrees, and enters the Wulin Wang martial arts tournament with the goal of dispelling the widespread perception of Tai Chi as a purely meditative exercise and prove its true might as a powerful martial art. Tiger’s televised matches attract the attention of Donaka Mark, owner of a Hong Kong-based security firm.

Tiger receives a letter from Donaka inviting him to Hong Kong with a job offer, which Tiger assumes is related to Donaka’s security business. Following his arrival in Hong Kong, however, Tiger learns the true nature of the proposition: Donaka operates an illegal underground fight club, and after being intrigued by Tiger’s impressive use of his Tai Chi skills, offers him the lucrative opportunity to compete. Tiger initially turns down Donaka’s offer, reasoning that using Tai Chi to fight for money is “dishonorable”. Upon returning to Beijing, however, Tiger learns to his horror that the Ling Kong temple is to be destroyed after local government officials cite numerous health and safety violations.

Tiger later learns from his girlfriend, who works in the health and safety office, that Tiger can petition the government to recognize the Ling Kong temple as a historical landmark due to the temple’s six-centuries of Tai Chi instruction. In the meantime, however, Tiger can only delay the temple’s destruction by raising the money to make the required refurbishments, leading him to contact Donaka and agree to fight.

There’s enough action in “Man of Tai Chi” for three martial arts films, and thankfully, it doesn’t ask the viewer to accept quantity over quality. Yuen Woo-ping is at the top of his game here, and orchestrates some impressive work, albeit aided by its fair share of wire-work, roughly on par with the likes of “Fearless”, used for such stunts as Tiger performing a somersault over an opponent, launching a tornado kick from a grounded position, or to give that added element of grace to his recovery from a fall. The only major gripe anyone is likely to have with the action is how little the fight with Iko Uwais amounts to.

Story-wise, it makes sense; they just picked the wrong opponent to use the plot device in question with! The same fate unfortunately befalls imposing Silvio Simac’s all-too-brief appearance as one of Tiger’s opponents in the fight club, and to an even greater degree, but the film’s abundant action sequences more than make up for these shortcomings.

Keanu Reeves has spoken in interviews about his desire to have the fighting in “Man of Tai Chi” tell a story, and that’s exactly what he and Yuen have done with the film. It’s increasingly rare for martial arts films in a modern setting to depict how a character’s martial arts training and ability manifests itself in the character’s day to day life, and yet the first time we meet Tiger, he’s in a planted horse-stance deep in meditation before heading off to train with Master Yang and debate the virtues of hard vs soft fighting.

As Tiger begins to fight for Donaka, his fighting style begins to drift further and further from the finely tuned Tai Chi he displays early on the film, with more and more emphasis on aggression and closed-fist striking. It’s a brilliant approach of using the action to mirror the overarching theme of Donaka’s efforts to transform Tiger from a fighter to a killer reminiscent of the similar themes in Jet Li’s “Unleashed”, also choreographed by Yuen, and yet Reeves and Yuen manage to keep the combat from feeling derivative of the earlier film.

Though relatively bloodless, the action is nonetheless intense and powerful, and filmed with maximum clarity with the camera often circling the fighters to provide the most complete view possible. Additionally, Chen has no difficulty in transitioning from either extreme of fighting that his character falls into, affording the viewer a real opportunity to see power, adaptability, and malleability of Tai Chi in combat.

OK maybe you have some skill

Mr. Anderson welcome back we missed you 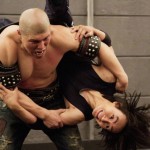 I guess we have to do this the hard way

I do believe Ill be keeping my wallet sir

For his debut outing in his transition from movie star to filmmaker, Keanu Reeves shows that he may well have a future behind the camera, and his self-professed fandom of martial arts movies is easy to see throughout the film. Tiger Chen proves himself a solid leading man who glides through the action with next to no effort at all, one who is ideally suited for the kind of action that Yuen Woo-ping orchestrates.

Yet looking beyond the action, arguably the greatest strength of “Man of Tai Chi” is its concern with how martial arts manifests itself in the day-to-day life of its practitioner, and it’s an element that, like Tai Chi itself, is both subtle and powerful in equal measure.

He just realized theres no spoon

Dilligent cop you have the right to remain silent

A little pushing hands to start the day