The world’s most legendary assassin comes out of retirement to avenge his beloved beagle in “John Wick”, the first feature film from 87 Eleven Action Design. Following his dual roles of villain and director of 2013’s “Man of Tai Chi”, Keanu Reeves once again dodges bullets, battles rogue agents, and blends into the masses in a three piece suit in one of the best action films of 2014!

Keanu Reeves portrays the title role of John Wick, the world’s most feared assassin who wants nothing more than to leave his life of violence behind. Looking approximately the same age he was in “Bill and Ted’s Excellent Adventure”, Reeves is in phenomenal shape for what the role calls upon him to do, and it shows. Opposing our anti-hero is crime boss Viggo Tasarov, played by Michael Nqvist, finding himself forced to cover for the foolish antics of his son Iosef, played by Alfie Allen. Willem Dafoe portrays the only real ally Mr. Wick has in his vendetta, the battle-weary Marcus. Adrianne Palicki rounds out the cast in the role of the nefarious Ms. Perkins, one of the few assassins capable of giving John Wick a run for his money.

There was a time when John Wick was the most feared assassin in the world, but now he wants nothing more than leave his blood-soaked former life behind. However, when his wife dies of a terminal illness, his hopes of a peaceful retirement seem destroyed, until a dog named Daisy is delivered to his doorstep, left to him by his late wife. As John bonds with his new companion, it seems that he may be able to move on, until a gang led by Iosef Tasarov, the son of notorious crime boss and John’s former employer Viggo, break into John’s house, kill Daisy, and steal his car. With his only remaining connection to his wife stolen from him, John finally decides it’s time for him to come out of retirement.

You’re a fan of “Gun-fu” and “Heroic Bloodshed”, you say? Then “John Wick” is most definitely up your alley! With the exception of “Equilibrium” and “The Matrix” films, gun fighting in a Hollywood film has never been morphed so perfectly into a martial art as it has been done here. In fact, it’s very clear that directors David Leitch and Chad Stahelski had the art of Gun Kata in the back of their minds whenever Mr Wick takes hold of a firearm.

His methodology for dispatching his opponents in a gun war is straight out of a zombie movie – always go for the temple. When John is firing, his goal is to nail his enemy right between the eyes nine times out of ten, and that one time that he’s aiming somewhere else is for the express purpose of setting them up for a headshot. The manner in which he unleashes ballistic warfare goes well beyond simply strong marksmanship – there’s a genuine look and feel that his capabilities with gun fighting are almost literally an extension of his martial arts’ skills, as if he’s been trained in a dojo for gun combat. You’ve heard the term “Gun-fu” before, but John Wick is clearly a true master of a very real ballistic martial art, although in his case, it’d be more accurate to describe it as “Gun-fu-jitsu”, given his predilection for working in throws and takedowns amid his gun play.

As he’s in the midst of shooting one opponent, John frequently finds himself applying a sweep, a choke-hold or a wrist throw against another and what ultimately results is some of the most seamless blending of armed and unarmed combat yet seen in an action movie. 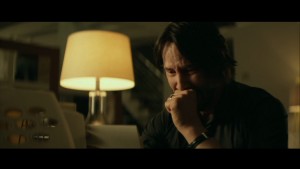 John Wick Keanu Reeves only assassins are allowed in the continental 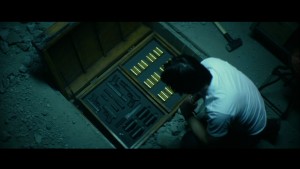 John Wick Keanu Reeves has decided to come out of retirement

Right as John prepares to embark on his revenge mission, Viggo’s henchmen arrive to stop him in his tracks, and his mastery of Gun-fu-jitsu takes both the viewer and his intruders by complete surprise. Just how much of a master he is at this art is even more vividly seen in a nightclub battle later on, when his precision with ballistic weapons goes from amazing to downright surgical.

When the guns are taken out of the equation, we see that John Wick is also a highly skilled Judo master. Donnie Yen first pioneered the modern use of grappling arts in martial arts films with “Sha Po Lang” (SPL) and “Flash Point”, and they’re put to fantastic use here. One of the best scenes in the film is a knockdown, drag out fight with John’s rival assassin Ms. Perkins, who more than holds her own against him, even using her jacket to apply choke-holds as if it were a jiu-jitsu gi. Reeves himself supposedly turned fifty last year, but nothing in his face or the physicality he displays throughout the film would suggest that he’s a day over twenty. He was largely a behind-the-scenes villain in “Man of Tai Chi”, but having your character’s name in the title affords you no such luxury, and he takes just about as much as he gives out.

Following her role as the title character in the failed “Wonder Woman” pilot, Adrianne Palicki has been establishing herself as something of a rising action star, and she shows some tremendous potential in that arena here. There’s also a lot of subtle hints in the film that she and John had once been lovers, making their rivalry that much more intense.

While the emphasis in the fight scenes is on the grappling arts, there’s a generous helping of fist and foot action as well, mostly courtesy of Viggo’s henchman Kirill played by Daniel Bernhardt. He and Reeves previously squared off in “The Matrix Reloaded”, and it’s just a awesome to see the leading man of the “Bloodsport” sequels in the spotlight once more. Viggo doesn’t ultimately prove as much of a physical foe for John as his henchman do, but he’s still willing to get his hands dirty when the situation calls for it. 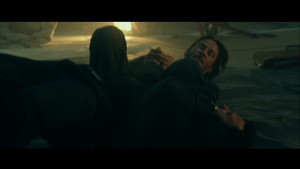 John Wick I dont need both hands for a wrist throw

When the resolution of the film dawns, the amazing ride that the audience has just been on won’t be the only thing they’re left marveling at; there’ll also be the world the film has created. One where the term “dinner reservation” carries an entirely different meaning, where hotels that cater exclusively to contract killers hide in plain sight, and where custom-made gold coins operate as their own unique currency. World building and cinematic universes are all the rage these days in any franchise with a devoted following, and a new one has just popped up in the most unexpected of places. What “The Avengers” did for superheroes, “John Wick” does for assassins and the kingpins of the underworld that employ them.

For lovers of action, “John Wick” should not be missed. Like their title character, first time directors Leitch and Stahelski go for the head shot and nail it. The underground, arcane world the film creates and that the audience is brought into makes it resonate in a way that is completely unexpected -the new cinematic martial art of Gun-fu-jitsu is just phenomenal, and wouldn’t make a bad video game either -wink wink video game developers! 🙂