The year 2003 heralded a new era of action star as Tony Jaa exploded onto the scene in Ong Bak – The Thai Warrior. The now 37-year-old, may be new to Hollywood but had been working as a stuntman under the tutelage of legendary action-director Panna Rittikrai for years. Amongst a proficiency in Thai Boxing, Jaa also practises Aikido and Taekwondo and it’s clear to see how Bruce Lee, Jackie Chan and Jet Li were his main influences.

The film is a spectacularly crafted showpiece not only for the reason it’s a non-American action film breakout, which has become a cult classic but also for Jaa who studied Muay Boran (Muay Thai’s predecessor) for the movie. It’s a reminder of the romanticism many of us have shared ‘growing up on kung fu movies’ and that we still can be awed.

Prachya Pinkaew is in the director’s chair while Tony Jaa stars as Ting our hero in the story. One of Thailand’s most prominent comedians, Petchtai Wongkamlao plays Humlae aka George, Ting’s sidekick and providing some of the comedy relief. Pumwaree Yodkamol plays the girl Muay Lek. Suchao Pongwilai is Komtuan the boss man and the film’s key ‘fighters’ are Chatthapong Pantanaunkul as Saming, Nick Kara as Big Bear, David Ismalone as Mad Dog and Nudhapol Asavabhakhin as Toshiro.

Way of the intercepting knee

Ting does the twist

The story revolves around our young protagonist Ting’s search for a stolen valued Buddha sculpture called Ong Bak, which they believe is in the city. Beginning in a village in rural Thailand, we see Ting win a tree climbing contest demonstrating his athleticism and Muay Thai prowess.

Reaching the city, Ting meets Humlae aka George, his cousin and Muay Lek who are bike racing hustlers and take Ting’s valuables to gamble in an underground fighting tournament. Ting pursues them and it is from here that the action and glorious fight sequences pick up.

Ong Bak being the lauded action vehicle for Jaa the action is heavy going. The scenes are beautifully choreographed and intricately assembled to propel the story, while showing off all aspects of Muay Thai and Jaa’s sheer magic when it comes to non-wire and non-CGI stunt work. Some of the stunts were clearly so carefully coordinated that they warrant multiple replays from various angles while slow-motion shots are chucked in bolstering their impact.

Having seen Ting win the village ritual of a tree-climbing race, and him practising his Muay Thai elements (Bolting Horse, The Ogre’s sword, The Fall of Hera etc).

Ting follows George to the underground ring searching for his money when he inadvertently is forced to fight. As he’s charged by the assailant the fight is quickly done with a wheeling round house kick flooring Ting’s opponent and flooring the agape jaws of the watching crowd.

As George’s sneaky ways start to bend toward helping Ting, they’re chased through the city. An elaborate set of jumps, squeezes through tight spots and various goon beat downs ensue. This makes up for a fun-filled chase sequence as an acrobatic lesson from Ting, while wise-cracking George fumbles behind and improvises, at one point rubbing chilli into someone’s eye.

In another fighting den we see the obnoxious Big Bear take on Ting (NB Big bear is played by Nick Kara the Australian a Kickboxing and Muay Thai champ as well as an MMA Coach). As Bear taunts Ting and patrons of the establishment, Ting finally succumbs and begins unleashing knees, flying elbows before finishing Bear off with a double flying elbow straight into his collarbones.

Seeing that money can be made from this new unknown star he isn’t allowed to leave and is immediately in the mix against the fuzzy-haired Toshiro who moves fast on his feet and Ting counters with kicks as he avoids being dazzled by his various shuffles before setting up the flying elbow. A beautiful roundhouse to the abdomen is delivered which knocks Toshiro down. A flying side knee finally finishes the fight.

Komtuan wants to win his money back so Ting faces off against the unsporting Mad Dog who offers to “touch gloves” before breaking a bottle on Ting’s head. It’s go time as the fight moves around the building with whatever one can get hands on being used as weapons; chairs, tables and fridges are smashed.

As the film unfolds and nears the climax we see Tuk Tuk chases and stunts, one being hurled from a bridge into an apartment block (look out for the covert shout to Luc Besson) before we see an old school* Thai rope fist fight between Ting and the drug-enhanced Saming. (*Traditionally hemp was wrapped around the fists but due to a death in the ring gloves are now used.) Ting strikes in various ways to thwart the snarling Saming. It doesn’t work.

Disheartened, Ting gets a lead takes them to find Ong Bak but not before the stunt insanity hits a new level as Tony Jaa performs some outstanding moves involving flaming legs and a flying knee through a crash helmet. Epic. Fresh and downright crazy.

Once Ting has located the ancient sculpture, he takes on multiple attackers, some with swords, saws and all sorts.

It’s clear that Jaa’s commitment to movement is of a calibre we have seldom seen. Perfect footwork ensures he moves with full force, dropping knees and kicks that lash out with a ferocious ease. This is all despite us knowing it’s a coordinated and choreographed effort but these stunt guys are taking punishment especially when spinning fists and kicks are deployed let alone when he manages to get in extra rotations during acrobatic sequences.

Now Ting’s warmed-up he takes on Saming again. This time showing the same disregard for keeping his guard up as Saming did in the first bout. He unleashes furious elbows and a barrage of double combos that include a double butterfly elbow – ridiculous, but fully awesome and a fitting way to end the various moves throughout the film.

In short Ong Bak is jaw-dropping. Heralding a new action star and showcasing some seriously mesmerising athletic Muay Thai moves, it’s without a shadow of doubt that Tony Jaa is up there with the best cinema martial artists that have graced the screen. 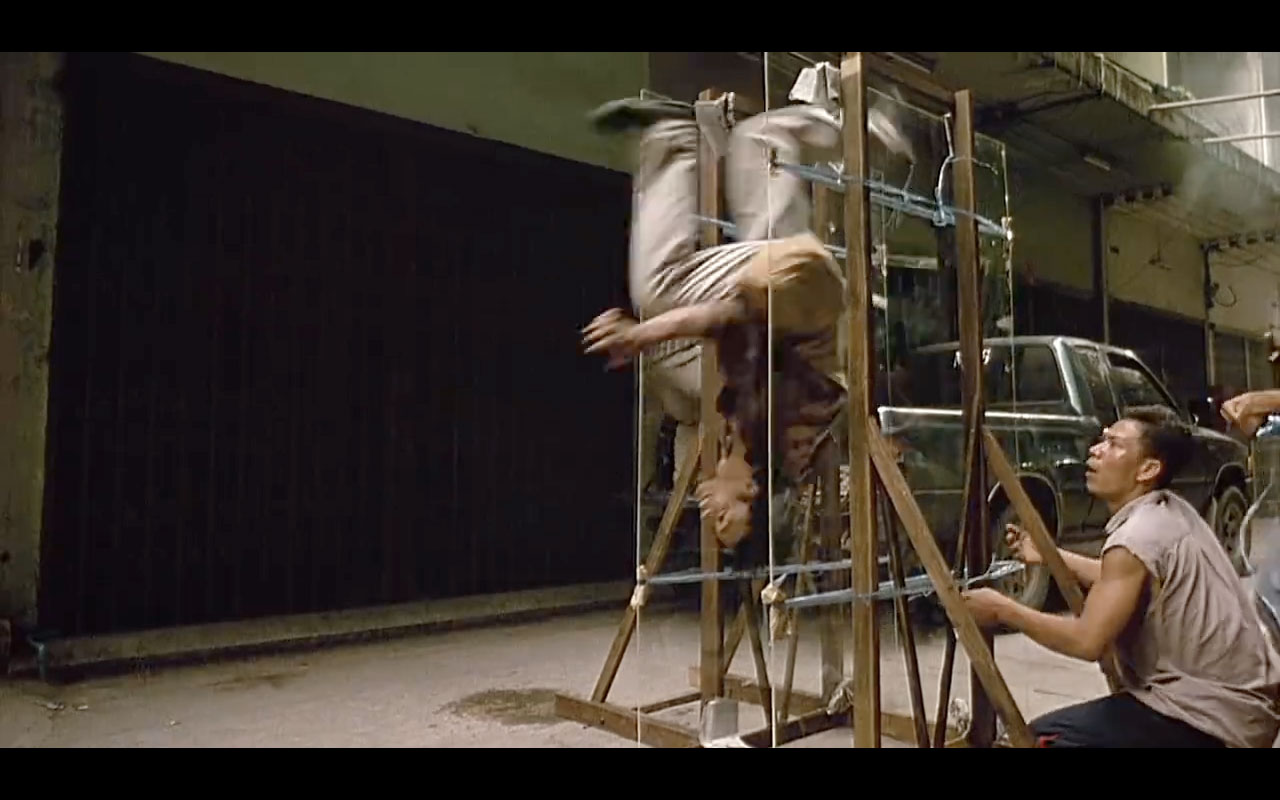 Chi is a serious movie buff, content producer and Krav Maga Instructor. He gets to do all these things by being brutally "ninja" with his time management while sipping on the tears of his enemies!! :O