“Mind-blowing”. “Breath-taking”. “Jaw-dropping”. Pick one or use all three, it makes no difference. One way or another, at least one of those phrases is going to pop up in your response to “The Raid 2”. Whoever said that sequels are rarely as good as the original clearly never passed that message on to Gareth Evans. Or maybe they did and Evans just took it upon himself to prove them wrong. Whatever the case, “The Raid 2” lives up to every bit of hype you’ve heard and then some. It isn’t merely hard to imagine anyone feeling like they haven’t gotten their money’s worth from “The Raid 2”, it’s downright inconceivable!

Reprising his role of rookie SWAT officer (Rama) from the first film is Iko Uwais. Sporting the same look he had in his all-too-brief appearance in “Man of Tai Chi”, he carries the film well with the experiences his character survived in the previous film having made him just slightly more cynical and hardened from the first (Raid) round. It’s still surprising to imagine that Uwais had been a truck driver just a few years ago; watching him destroy foes with a blitzkrieg of rapid-fire silat punches, it’s clear that he was born to be Indonesia’s next action hero.

Also returning from the original film is Yayan Ruhian in the role of Prakoso. A minor character compared to his previous role, it’s nevertheless a pivotal one to the film that affords him plenty of opportunities to show what he’s made of, albeit as a less psychopathic but equally deadly murder machine than Mad Dog. Arifin Putra handles the arch-villain role as Uco, an up-and-coming gangster increasingly disillusioned by the more conservative criminal activities of Jakarta’s reigning crime boss and his father Bangun, played by Tio Pakusadewo. Alex Abbad provides more behind-the-scenes villainy in the role of Bejo, and relies on three hired assassins to do his dirty work – Baseball Bat Man, Hammer Girl, and a blade-wielding hitman known simply as the Assassin, played by Very Tri Yulisman, Julie Estelle, and Cecep Arif Rahman, respectively, with each carrying their own unique tool of human destruction.

Stuck in the MUD

Someones gotta do the dirty work…

Two hours after the conclusion of the first film, rookie SWAT officer Rama, meets in secret with Bunawar, one of the few honest cops among Jakarta’s finest. Bunawar runs a small unit within the Jakarta police force dedicated to fighting the corruption in the city’s law enforcement. Bunawar provides a safe haven for Rama’s father, wife, and newly born son, knowing that reprisals for his activities from the first film will surely befall Rama and his loved ones. Bunawar and Rama hatch a plan to uncover every corrupt cop in the city by strategically placing Rama in prison alongside Uco, the son of Jakarta crime boss Bangun. Through a trying, bitter prison sentence, Rama succeeds in earning Uco’s trust, and upon his release, is hired as an enforcer in Bangun’s criminal empire.

Now released from prison, Uco hopes to claim his birthright by taking on greater responsibility in his father’s criminal activities. However, Bangun insists that his son wait for his time, and rejects Uco’s proposals to encroach on the territory of the rival Goto crime family from Japan, with whom Bangun has kept a truce for years. As Rama’s investigation into Bangun’s criminal activities continues, he soon finds himself caught in the middle of a gang war between Bangun and the Goto’s engineered by the frustrated Uco and Bejo, a rising gang-leader hoping to bring both crime families down.

Boys just wanna have fun stunt practice on The Raid 2

If you were convinced that it was all downhill for Evans, Uwais, and co after “The Raid: Redemption”, get ready to be proven wrong. You will truly be hard-pressed to find fault with the film’s plentiful Silat-driven action anywhere during its 150 minute running time. The introductory action sequence sees Rama battling a swarm of his fellow inmates within the confines of a prison bathroom stall, using the limitations of his surroundings to narrow down the number of foes he has to face. It’s probably the first time since the climactic fight in Jet Li’s “Unleashed” that any filmmaker has even attempted to film a martial arts fight inside of a toilet! And it is as satisfying as anything you’d see in more wide-open terrain. Indeed, Evans displays great skill at staging fight scenes in areas that most wouldn’t expect to lend themselves to any kind of satisfying action.

Uwais and Yayan Ruhian once again handle the fight choreography, with additional help from acclaimed fight choreographer Larnell Stovall, well known for his work on the likes of “Undisputed 3”, “Never Back Down 2”, and “Mortal Kombat: Legacy”. Jackie Chan himself would applaud the creativity of the choreography the three come up with and the way in which it incorporates the surroundings the characters find themselves in. Whether it’s Rama battling opponents in the backseat of speeding car or wading through a riot in a mud-filled prison yard to keep Uco from being killed, there’s seemingly no environmental setting where Uwais isn’t right at home and Evans isn’t capable of bringing the action to its rawest potential. Evans also stages what is easily one of the best car chases in years in the film, taking place simultaneously with Uwais’ backseat brawl. It must also be said of the staging of the chase that some of the ways in which the camera captures the action should have probably earned the camera man a credit among the film’s stunt performers.

However, the action is no less spectacular when it moves out into the open. Owing to the much longer running time, the viewer is afforded a little more room to breathe between each action sequence, and the midsection of the film grants Rama a bit of a respite from the almost ceaseless fighting he’s partaken in since the first film to focus on characters like Prakoso. Yayan Ruhian practically stole the show the first time around, and he continues to make an impression in his comparatively brief appearance in the sequel. His face, partially obscured by an overgrown beard and a Treasure Troll-like mass of ungroomed hair, a good portion of the second act is largely devoted to his role as a somewhat reluctant assassin in Bangun’s inner circle. While not as vicious as Mad Dog, he is nevertheless a beast when he springs into action. And make no mistake – the action is BRUTAL. You’ll probably feel like the poor fellow who had his slammed into a wall repeatedly in the first film got off pretty easy compared to what happens to people in the sequel.

When you have assassins by the names of Baseball Bat Man and Hammer Girl in your movie, you know that the gloves have come off! Each of them are as automatically relentless an enemy as Rama could possibly be faced with, both having seemingly crafted their own unique martial art out of their respective weapons of choice. Rather than simply clobbering opponents with blunt, heavy-handed strikes, both of them bring a style and coordination to the weapons they wield that could only be the product of serious training. Yet, out of the plethora of evildoers in the film, it is the one simply known as The Assassin that tops them all. Evans’ and Uwais’ first collaboration “Merantau” saw the latter training with a traditional Indonesian blade called the Kerambit. However, it is only in “The Raid 2” that fans finally get to see the weapon in action when Rama faces off with The Assassin, who wields a pair of the insidious curved daggers. Like “The Raid 2” itself, this sequence alone is more than worth the wait!

Anyone who has even the SLIGHTEST interest in martial arts films owes it to themselves to see “The Raid 2”, yesterday! Whereas the original had the DNA of a zombie horror film coursing through its veins, the sequel is built on the bedrock of a modern crime thriller. Like the original, the sequel crafts some of the most stunning martial arts action since Hong Kong’s golden age on its unconventional foundation. How Evans and Uwais are going to follow “The Raid 2” up is anyone’s guess. But as anyone who has seen “Merantau”, “The Raid: Redemption”, and now “The Raid 2” will certainly agree, both men have an incredible desire and capacity for outdoing themselves. 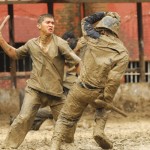 After Gareth Evans and Iko Uwais’ first film, “Merantau”, Evans began prepping their next collaboration, entitled “Berandal” (Indonesian for “Thugs”). However, Evans was unable to secure the necessary finances for the scope he had in mind for the film, and moved into “The Raid: Redemption”, which was scaled down. After deciding to turn the first film into a trilogy, Evans began to retool “Berandal” to serve as the sequel to “The Raid”. Following the success of the first film, Evans was able to secure the necessary funds, and thus, “Berandal” was transformed into “The Raid 2”!

While attempting to get “Berandal” started, Evans released a proof-of-concept teaser online depicting Iko Uwais battling opponents in a prison bathroom stall. That scene is fully realized in the first fight scene in “The Raid 2”.