We take a look at one of auteur director John Woo’s early action-packed tales of bullets and brotherhood, “Heroes Shed No Tears”. Starring Hong Kong legends Eddie Ko and Lam Ching-Ying, “Heroes Shed No Tears” is available today and released by 88 Films on UK Blu-ray for the first time from a stunning 2K restoration!

Popular Shaw Brothers and TVB actor Eddy Ko Hung stars as a war veteran turned mercenary, “Chan Chung”. In a career stretching back to the 1960’s, Ko has starred in films such as “The Invincible Iron Palm”, “The Thundering Mantis”, “The Postman Strikes Back”, “The Miracle Fighters”, “Shaolin Drunkard”, “The Peacock King”, “The Bride with White Hair”, and many more.

He became popular with Chinese television audiences playing Master Huo Yuanjia in the 1995 TV version of “Fist of Fury”, that starred Donnie Yen as Chen Zhen. He will be familiar to worldwide film fans for his role as Grandpa Hong in “Lethal Weapon 4”, and his cameo as a potential buyer in Jackie Chan’s “Rumble in the Bronx”.

Martial arts actor and stuntman Lam Ching-Ying plays the sadistic “Vietnamese Colonel”. His defining role was as “Master Kau” in the “Mr Vampire” films. He will be familiar to martial arts movie aficionados as the fan-wielding assassin in “Magnificent Butcher“, and as Wing Chun master “Leung Yee-tai” in “Prodigal Son“. He sadly passed away from liver cancer on 8th November 1997 aged just 44.

Action director and actor, Chin Yuet-Sang, appears as “Chin”, one of Chan Chung’s unit. He is a familiar face, often playing a poor thug, henchman or soldier to be beaten up by the hero in movies such as “When Taekwondo Strikes”, “The Valiant Ones”, “Iron Fisted Monk”, “Warriors Two”, “Last Hurrah for Chivalry”, “Righting Wrongs” and many others.

The Thai government hires a group of Chinese mercenaries led by Chan Chung to capture a powerful drug lord from the Golden Triangle Area near the Vietnamese border. The mercenaries capture the drug lord, but are stalked across the country and through the jungle by his loyal troops.

Along the way, the heroes cross into Vietnam and must face a sadistic Vietnamese colonel as well as protect the family of Chan Chung, who live in a village near the border.

There are hints of the stylish framing and use of slow motion filming that would bring acclaim to Woo in his later films. In amongst the explosions there are some grim scenes of executions and an attempted rape, leaving the audience with absolutely no doubt who the bad guys are.

Woo cranks up the tension as our heroes are stalked through the jungle, with camouflaged assailants hiding in just about every tree and bush trying to kill their prey by surprise. Some of the violence featured would be more suited to a horror exploitation flick, and is on a par with the most recent Rambo movies. A few of these scenes, along with some of the nudity and drug use, were apparently added in well after John Woo had left the production.

Although the action is dominated by firearms, when there is hand-to-hand combat, it is of the no-nonsense, hard-hitting variety. There are no flashy traditional kung fu moves when a swift army boot to the face will do the job! This is especially borne out in the final confrontation between Eddie Ko and Lam Ching-Ying, but is no less bloody than any of the action that precedes it.

Extras include an interesting commentary from Asian cinema expert Brandon Bentley, and a handy “Tale of Two Cuts” feature, that brilliantly compares various scenes from an early version of the film with its 1986 rehashed release. There is also a recent interview with star Eddie Ko in which he discusses his experiences filming “Heroes Shed No Tears” and working with John Woo.

Western fans of Asian cinema have been enjoying a purple patch these last couple of years. Many classic titles have been restored in glorious high definition with some fantastic releases on Blu-ray from the likes of Eureka Entertainment and Criterion. UK-based 88 Films are adding to this catalogue of fan favourites, releasing many popular films in the genre, that include “One Armed Swordsman”, “Eight Diagram Pole Fighter”, “Miracles”, “Come Drink With Me”, “Crime Story”, “Heart of the Dragon”, and “Dragons Forever”, to name but a few. 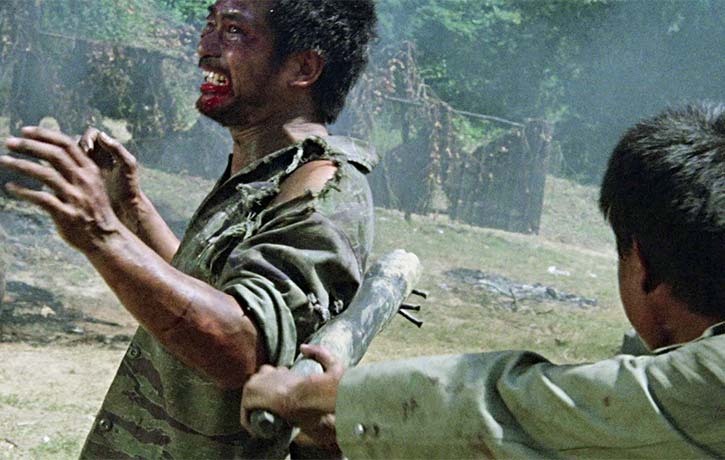 “Heroes Shed No Tears” is another worthy contribution to this ever-growing list of first-time UK Blu-ray releases. The high definition restoration of this film is a thing of beauty! The last time I saw this was on VHS. The picture was grainy and it was difficult to make out details in scenes shot in low light. This edition is crisp, clear and surprisingly, much more colourful than I remember. The lush countryside of Thailand where this was filmed looks truly stunning. This edition is beautifully packaged, and includes a fascinating collectors booklet full of background information with images from the movie, international artwork, even the original music cue sheets for the film’s editor.

In the movie itself, I found Lam Ching-Ying’s performance surprisingly bland, but Eddie Ko is excellent throughout, giving his character a depth beyond the parameters of the simplistic script. Child actor Ma Ying-Chun is also excellent, demonstrating a very mature acting talent in the role of Chan Chung’s young son “Kenny”.

In amongst the serious drama, violence and action, there are a couple of attempts at broad humour. Although not always successful, t does help break up the fairly relentless bloodshed. This film had a troubled production, with scenes added in that were not shot by Woo, which goes some way to explaining the jumbled styles of many scenes.

In my review of Woo’s “Last Hurrah for Chivalry” I said you could easily swap the swords for Berettas, and it would be like a contemporary John Woo film. Conversely, with “Heroes Shed No Tears”, you could swap the jeeps for horses and the guns for swords, and it would play out like a classic kung fu film.

Connoisseurs of Asian cinema and fans of John Woo’s stylish brand of action will assuredly want to add this action-packed war film to their collections! 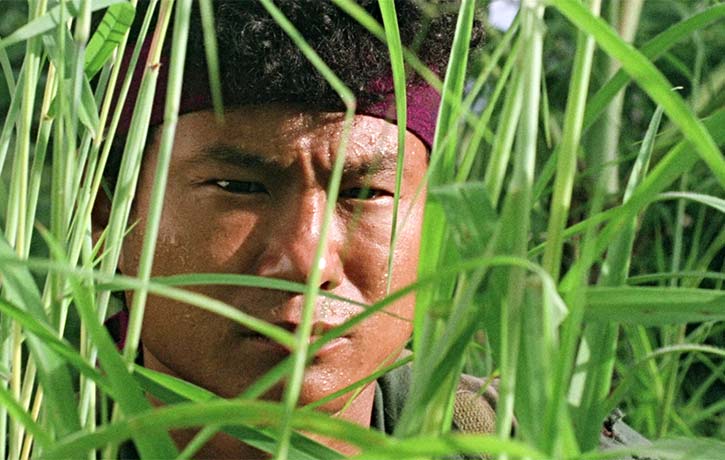 The warfare is intense

John Woo’s “Heroes Shed No Tears” is out on Blu-ray courtesy of 88 Films and Amazon.

Do you remember “Heroes Shed No Tears” from 33 years back? How much are you enjoying these newly restored classics? Which other John Woo thrillers or martial arts action classics would you like to see receive the same royal treatment? Let us know in the comments below! Let us know in the comments below; Like, share and join in the conversation on Facebook and follow us on Twitter & Instagram.