Sad news spread in the action movie world on 23rd August 2020 that acclaimed Hong Kong filmmaker Benny Chan had passed away in Hong Kong Sanatorium, aged 58. After a health screening last year, he was diagnosed with late-stage nasopharyngeal cancer which meant he wasn’t able to work on the post-production of his last film, “Raging Fire”.

Born on 7th October 1961, he first started work in film and TV production at Rediffusion Television working in continuity in 1981. In 1982, he joined TVB, becoming a production assistant to the highly regarded director Johnnie To. By 1985, Chan had worked his way up to being a television director, co-directing television series like “The Flying Fox of Snowy Mountain”. Chan’s debut as a film director began in 1990 with “A Moment of Romance”, which starred Andy Lau and was produced by To. It was a box office hit and garnered several awards and nominations. During the 1990’s, he directed films like “Big Bullet”, “Who Am I?”, and the blockbusting “Gen-X Cops”. He also continued to work in television, directing episodes of the 1995 adaptation of “Fist of Fury” starring Donnie Yen.

Working exclusively in the film industry since 1998’s “Who Am I?”, starring Jackie Chan, he would go on to direct more of the action superstar’s movies, including the box office hits “New Police Story”, “Rob-B-Hood”, and “Shaolin”. He also directed the hugely popular films “Heroic Duo”, “Divergence”, “Connected”, and “The White Storm”.

Chan infused all his films with a glossy, big-budget sheen, making them competitive with Hollywood productions. Even so, he maintained the high-quality, unique action that audiences have come to expect from Hong Kong movies. His film “Connected”, starring Louis Koo, was arguably an improvement on its Hollywood counterpart, “Cellular”, which starred Jason Statham, Chris Evans and Kim Basinger.

Although he worked with established stars such as Jackie Chan, Sammo Hung and Andy Lau, he helped to usher in the next generation of action stars for the new millennium, including Louis Koo, Nicholas Tse, Daniel Wu, and Jacky Wu Jing.

We were fortunate to interview Benny Chan during the promotion of his epic movie “Call of Heroes”, which you can read HERE.

Script read through with Donnie Yen

Jackie Chan and Benny Chan filming Who Am I

“From the moment I heard the news, until now, I still feel a little overwhelmed. The work bag I was going to give him was still here with his initials on it. He left before I could give it to him…I have cooperated with director Benny Chan in many works. For me, he is a partner in work and a good teacher and helpful friend in life. His appearance is always a modest gentleman, but there is always a lot of pride in his works. It is the biggest regret that we have no chance to cooperate with each other in this life. There is a good director in heaven. We can only miss you and miss you forever.” 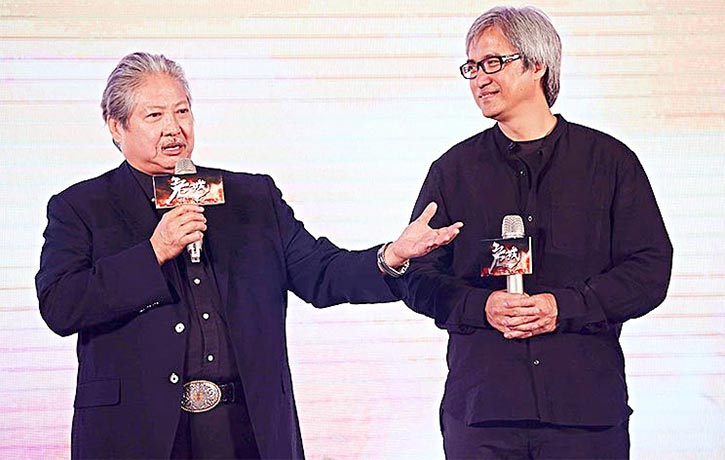 Sammo Hung worked with Benny Chan on Call of Heroes

Donnie Yen (who worked most recently with Benny Chan) said on Facebook:

“Benny and I first worked on the TV series Kung Fu Master and Fist Of Fury, back in 1995-1997. Benny was the producer and director. I was fortunate to work with him again on our latest film, Raging Fire. 25 years later, he’s still the same positive, strong, happy, inspiring director and friend. I will miss your smile, our creative exchanges and fatherhood stories. You will be greatly missed my friend. RIP.”

Script read through with Donnie Yen 1

“Today I was truly saddened to find out that Hong Kong legendary director Benny Chan had passed. Gen-X Cops, Divergence, New Police Story…I did some of my best work under his guidance. I will miss you.”

“Shocked to hear the passing of Director Benny Chan. Not only was he a strong force behind Hong Kong cinema. He was kind, moral, a true gentleman. We will miss you. Rest In Peace.”

Chan is survived by a wife, a son and a daughter. As a leading light for the new millennium of Hong Kong movies, Benny Chan will be sadly missed by KFK and many in the industry, as well as movie fans all around the world. Rest in Peace Benny…