“Mortal Kombat” is the ultimate nostalgic Rorschach test. With video game movies still largely discussed in disparaging terms, simply being regarded as ‘tolerable’ is a huge win, “Mortal Kombat” remains beloved to this day as the first video game adaptation to break the curse, and one of only a handful to ever do so.

Despite also swimming in a much more shallow pool of blood than the games it derived from, it’s also a massively satisfying treasure trove of amazing martial arts action and well-oiled world-building that even those who’ve never laid eyes on a gaming console before can get pulled into. Nevertheless, even “Mortal Kombat” hasn’t managed to avoid the effects of hindsight over the years, and any fair evaluation of the movie has to bear that in mind. That’s certainly harder than in most cases, however, because in every area where “Mortal Kombat” gets it right, it gets it so, SO right.

Liu Kang is a model disciple

Once a generation, the fate of the realms is decided in the celestial martial arts tournament known as Mortal Kombat. Per the rules established by the Elder Gods, the forces of Outworld can only invade Earthrealm after winning ten consecutive victories in the tournament.

Goro is a merciless adversary in Mortal Kombat

Under the leadership of the sorcerer Shang Tsung, Outworld is now only one victory away from conquering Earthrealm. Standing in their way are a trio of disparate warriors from across the planet – former Shaolin monk Liu Kang, determined to avenge his brother Chan’s death at the hands of Shang Tsung; Hollywood action star Johnny Cage, hoping to give his career a boost through the tournament; and Special Forces soldier Sonya Blade, who has her own vendetta with Shang Tsung’s accomplice Kano for her partner’s death.

With the guidance of Lord Raiden, the God of Thunder, the trio soon realize that winning Mortal Kombat will be the greatest challenge they’ve ever faced.

Few movies have ever been relics of the era they were born out of like “Mortal Kombat” is. The games were both a true phenomenon of the 1990’s while also being the poster child of video game violence with the well-known controversy they inspired.

Upon its release in August of 1995, “Mortal Kombat” made history by the minute – it was the first great video game movie after a string of embarrassing failures, it pulled off the miraculous feat of successfully adapting the games while flying under a PG-13 rating, and its opening titles and theme song each became a “Star Wars”-level instant classic.

Nostalgia around Mortal Kombat is just the Beginning…

In virtually every aspect but the games’ over-the-top fatalities, “Mortal Kombat” was everything fans of the franchise and gamers overall had dreamed of seeing on the big screen.

Looking back a quarter century hence, a time span that has included a vast expansion of the games themselves and a web-series that delivered on the game’s R-rated carnage in spades, it’s perhaps more necessary than usual to look beyond the warm feelings of nostalgia to give a truly comprehensive assessment of “Mortal Kombat”. Because there is actually much that “Mortal Kombat” does so very, very well. 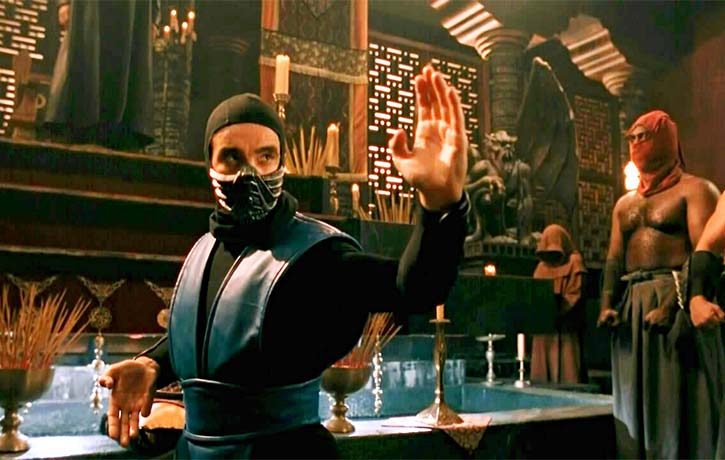 Sub Zero has a surprise in store for his opponent

Nearly every character magnificently gets their due. Cary-Hiroyuki Tagawa’s performance as Shang Tsung is an all-time Hall of Famer for big screen villains. Robin Shou’s Liu Kang, Linden Ashby’s Johnny Cage, and Christopher Lambert’s Raiden are joys to see onscreen and quotable to eleventh power. Bridgette Wilson’s Sonya Blade hits the bull’s eye on the character’s no-nonsense drill sergeant attitude. And rarely has a movie monster aged as beautifully as the film’s presentation of the towering Goro.

The retcon of Scorpion and Sub-Zero as henchmen under the control of Shang Tsung feels so organic that the loss of their well-known rivalry can actually be forgiven. However, “Mortal Kombat” has still managed to fray around the edges in some key aspects. The movie’s 90’s-era CGI is the component that holds up the least well by far (though to be fair, the effect of its 1997 sequel “Mortal Kombat: Annihilation” make the original’s look like James Cameron’s “Avatar”).

Sonya Blade and Kitana are also sadly the Achilles’ Heel in the movie’s near-ceaseless action scenes. Both Wilson and Talisa Soto immaculately embody their respective character’s personalities, but both are also clear newcomers to martial arts in their fight scenes, admittedly however, Sonya’s coup de grâce against Kano is nearly good enough to overlook that. 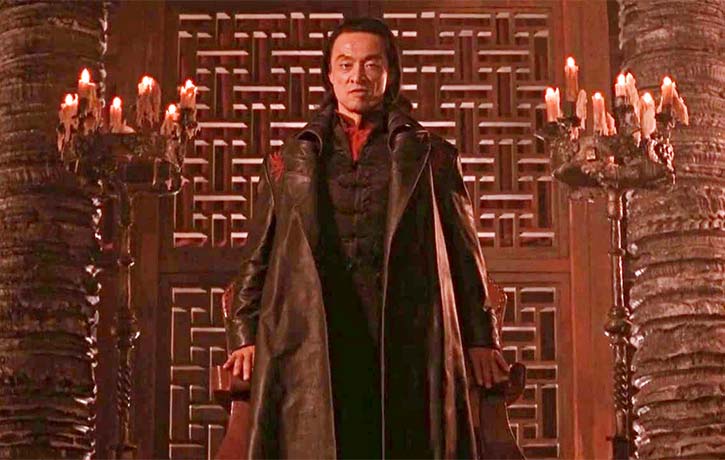 Shang Tsung is pleased to see everything falling into place

Raiden prepares to bring the thunder

Sonya Blade gets the lockdown on Kano

The title of China’s “Temple of Light” is also a very generic, though probably necessary, workaround from mentioning the Shaolin Temple by name, despite Liu Kang’s Shaolin monk origins in the games, while certain sets (like the boat on the trip to the tournament) look very low-budget and improvised by today’s standards.

MK is an Action-Lover’s Delight (issues aside!)

All these blemishes aside, “Mortal Kombat” is an action-lover’s delight and by far one of the best American-made martial arts flicks of the 90’s. With a few warm-up beats to set the table, once the tournament gets started, the movie is grab bag of exhilarating action, with Johnny Cage’s match-up with Scorpion and Liu Kang’s duel with Reptile reigning supreme amid loads of rollicking battles, all of which feature sound effects of strikes landing that, perplexingly enough, don’t seem to be in use anymore.

Goro takes exception to the idea that he could lose

Scorpion has a point to make

Johnny Cage ends the fight on a money shot

The Liu Kang vs Shang Tsung Showdown: One for the Ages…

Liu Kang’s final showdown with Shang Tsung is also one for the ages among video game movies, and if the “Enter the Dragon”-influences on the franchise weren’t clear enough from the premise alone, they certainly are when Liu Kang unleashes his inner Bruce Lee.

“Mortal Kombat” hasn’t escaped the pitfalls of age. There are aspects of the movie, a few of them major, that are awkward by today’s standards, and some that simply do not hold up well. But there are far more where it has actually stood the test of time incredibly well.

Kano and Sonya Blade battle it out

The franchise itself has shown its staying power through the subsequent iterations of the games, its R-rated (albeit incomplete) web-series, and next year’s upcoming reboot. However, to overlook “Mortal Kombat” as a crucial element of the franchise’s history would be a major folly. It’s not without its faults today, but some two and a half decades later, “Mortal Kombat” is still one hell of an entertaining battle for the fate of the realms and one of the most thoroughly enjoyable movies of the 90’s – alone worth revisiting for the nostalgia its sure to evoke in you…

In the Kombat den

Liu Kang and Princess Kitana get some training in

Well this is awkward

What are your thoughts on “Mortal Kombat” a quarter of a century after its release – what do you remember most fondly about this nostalgic classic?What are some of your favourite video-game movies? Are you looking forward to the upcoming “Mortal Kombat” reboot in 2021? Let us know in the comments below;

Get “Mortal Kombat” on Blu-ray, now!

GOT MORTAL KOMBAT MODE SWITCHED ON? If not you should have, as this is your fight in the Earthrealm for immortality…! Don’t just chill with Sub-Zero…be a hero and get all fired-up the FUniverse, with these Top 5’s, Top 10’s, deep-dive interviews, train to be IMMORTAL in OFFICIAL KFK gear, and subscribe for the next level of OUTWORLDLY-FU on YouTube!

MMA: 5 of the Biggest Upset Wins in History