“Universal Soldier” was Jean-Claude Van Damme’s shift into the blockbuster stratus of movies. While the budget of $23 million might seem somewhat modest, especially compared to modern day box-office behemoths, it was the largest budget by far of a movie Van Damme had starred in and quite sizeable for the time.

Dolph Lundgren had played the lead five years previously in the much underrated “Masters of the Universe” (1987) but had not starred in a production as big as “Universal Soldier” since then.

The movie was produced by Carolco Pictures, already responsible for all three “Rambo” films and the previous year’s worldwide top grossing movie “Terminator 2: Judgment Day”. The director, Roland Emmerich, would later direct box office megahits like “Independence Day” (1996) and “The Day After Tomorrow” (2004) so even if people didn’t know it at the time, “Universal Soldier” had a director with a real blockbuster sensibility at the helm.

So add all this together: Van Damme and Lundgren at their physical and energetic peaks, a production company with a proven track record, a decent budget and a director that would go on to be one of the great blockbuster movie directors of his generation. The result should be explosive, and it is!

Ally Walker takes on the role of feisty, reckless but ultimately noble journalist Veronica Roberts. Veteran actor, and no stranger to action movies, Ed O’Ross is Colonel Perry, the man in charge of the UniSol program in the field. He is aided by Woodward played by another screen veteran, Leon Rippy. Apart from GR44 and GR13, the most prominent UniSol is GR76, played by former Mr. Universe and “Best of the Best II” (1993) villain Brackus, Ralf Moeller. Rounding out the cast is Jerry Orbach who steps into the role of Dr. Christopher Gregor, the brain behind the entire UniSol program.

Vietnam 1969. In a Northern Vietnamese village, Private Luc Deveraux, who longs for home, discovers that his sergeant has gone completely insane. Ranting about traitors, Sergeant Scott has butchered fellow squad members and villagers alike. Luc succeeds in stopping Scott but at the cost of both of their lives.

Flash forward to over twenty years later…Now Luc and Scott have been reanimated, through a process known as “hyper-acceleration”, as UniSols GR44 and GR13 respectively in the U.S. government “Universal Soldier” program. UniSols are the soldiers of the future possessing enhanced strength, speed and endurance along with a regenerative healing factor.

Scott as the frightening UniSol GR13

GR13 and the UniSols on the hunt for Luc

Also, with their memories wiped, they are easier to control. They seem like the perfect weapons with no weaknesses. However, as time goes by both GR44 and GR13’s memories of their former lives, specifically at the time of their deaths, start to seep back into their consciousness. For GR13, it’s Luc’s simple wish to return to his home and parents. But for GR44, it’s Scott’s insanity about eliminating traitors, Luc being his main target.

Due to tenacious reporter Veronica Roberts’ interference in pursuit of a story, Luc escapes from the UniSol program. Thrown together by fate, maybe they can help each other. Veronica wants her story while Luc just wants to go home. However that’s going to be far from easy with the psychotic Scott determined to hunt Luc down and terminate him once and for all.

The movie opens with something of a prologue: Luc and Scott in the hell of the Vietnam war. With rain pounding down around them and an ominous tone permeating, this setting and staging would’ve been worthy of any high-quality Vietnam war film. Luc and Scott fight but this time it is short-lived. The true confrontation will be left until later. It’s also an opening that foreshadows the climax of the story.

We then move to the present time, location: the Hoover Dam. Luc and Scott are now part of the Universal Soldier program and are deployed to rescue innocent civilians taken hostage by terrorists. There is a breathtaking stunt when Luc and Scott Australian rappel (a forward facing descent) down the side of the dam. No computer graphics here. This is a real-life stunt and a great way of showing the capabilities of the UniSols. Needless to say the terrorists are not much of a match for them and Luc and Scott take them out with ruthless efficiency.

Scott is relentless as a Terminator

UniSols need a recharge between missions

Universal Soldier has a Terminator-Style Feel to the Action

When Luc begins to regain some of his memories and escapes from the UniSol program, the movie takes on a Terminator-style feel with Luc and Veronica pursued by a near-unstoppable killing machine in Scott. And with Lundgren’s imposing physical frame and the character’s psychosis, Scott makes for a truly scary villain.

In this section of the movie we get some blistering shootouts and a fantastic chase scene with Scott in his enormous juggernaut truck. As if he wasn’t terrifying enough!

We are also treated to a scene where Luc pummels some roughneck locals in a diner to the strains of a jukebox. But unfortunately (or fortunately, depending on your perspective) we don’t get any dance scene à la “Kickboxer” before the kicks fly! We do however get to see some of Van Damme’s smooth precision kicking techniques like a jumping front kick and a lightning-quick side snap kick. But it’s not just Van Damme’s expert kicking that is on show. We also get to see Lundgren’s excellent kicking skills and balance when Scott delivers some powerful rapid-fire high side kicks to some back-talking locals.

GR13 unloads on Luc and Veronica

Final showdown between Luc and Scott

Luc and Scott do have their inevitable one-on-one showdown. The setting is not what you might think of as epic. It’s not on top of a skyscraper or on the wing of a plane or anything like that. Without giving too much away, it’s more of a rural setting so it does nicely bookend the opening sequence set in rural Vietnam which is a great story choice. And importantly for the action fans, the fight does deliver.

Van Damme’s kickboxing is forcefully on display as he unloads a range of kicks and punches as Luc tries to chop down the giant redwood that is Scott. Scott on the other hand is the Goliath of this encounter able to just fling Luc around with brute force.

It makes sense for Scott to be the more power-based fighter with Lundgren’s background in Kyokushin Karate and this influence can be seen when Scott unleashes some heavy punches, downward elbow strikes and a hefty side kick during the clash. With Luc and Scott really taking it to each other, use of the environment and the personal stakes for Luc as high as they can be, it’s a visceral showdown and a satisfying climax to an awesomely satisfying action movie.

Van Damme + Lundgren! That alone should put “Universal Soldier” into the “Nuff Said” category making it a must watch for all martial arts and classic action movie fans alike.

Scott with the upper hand 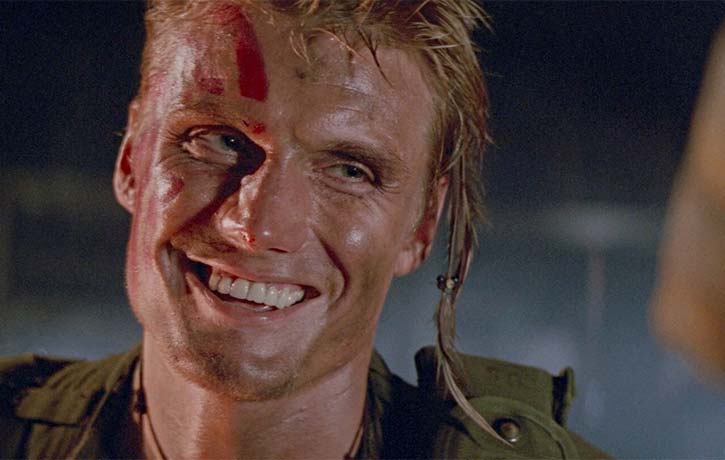 There is no question that “Universal Soldier” is one of Van Damme and Lundgren’s greatest works. Due to the talent involved and the skilled direction, “Universal Soldier” has a high-quality feel throughout. Luc Deveraux is one of Van Damme’s most enduring characters and here he plays him with the perfect combination of physicality, emotion and humour.

Van Damme makes Luc’s regaining of his humanity very believable and shows that he has acting talent to go along with his amazing martial arts skills. Scott is also one of Lundgren’s greatest roles and it’s ideal to see him really let loose as the unhinged UniSol.

Over a decade later, that continuity was itself retconned with the release of “Universal Soldier: Regeneration” (2009) and “Universal Soldier: Day of Reckoning” (2012) both featuring the reuniting of Van Damme and Lundgren. All of these movies failed to find any real mainstream success when compared to the original. The only one to come close was “Universal Soldier: The Return” due in no small part to the presence of the great Michael Jai White, coincidently another Kyokushin Karate expert.

There has been talk of a complete reboot but I would have reservations about its probability of success. There is a real feeling of lightning-in-a-bottle with the original “Universal Soldier” and it would be a daunting task to replicate that, to say nothing of surpassing, the talented combination of Van Damme, Lundgren and Emmerich. So, if you want to see the best the “Universal Soldier” franchise has to offer, go back to the original. You won’t be disappointed.

Always check the back seat

Luc takes aim at his pursuers

GR13 has fully reverted to the psychotic Andrew Scott

What do you recall best about the original “Universal Soldier”, and what do you think about the action and fights? It does look and sound great on Blu-ray!

Small-time fighter or Universal Soldier? Whichever you’re into, put your shoulder into your training then open the door into a FUniverse of news, Top 5’s, Top 10’s, exclusive interviews, soldier on in your own KFK Official Gear, and subscribe to get to grips with more hi-NRG fight action heroes on YouTube!