By the time 1985 arrived, Chuck Norris’ movie career was soaring as high as his flying kicks. Already with box office successes from the previous few years under his black belt like “Lone Wolf McQuade” (1983), “Missing in Action” (1984) and “Missing in Action II: The Beginning” (1984), he had become a bankable mainstream action star on a roll.

He would keep that batting average going with “Code of Silence”, a gritty, street-level cop thriller directed by Andrew Davis. Davis would go on to direct Steven Seagal twice in “Above the Law” (1988) and “Under Siege” (1992) and also most notably to direct the box-office behemoth, “The Fugitive” (1993). It is certain that Norris was in safe and eminently capable hands and together they crafted a memorable action-crime thriller.

Chuck Norris takes on the role of Detective Sergeant Eddie Cusack, a streetwise, straight-arrow Chicago cop. Cusack is not only caught in the middle of a war between rival crime factions, but also has to deal with his fellow police officers as he tries to expose a volatile and unreliable member of his own task force. Stepping into the role of Luis Comacho, the vicious head of a Colombian drug-cartel, is Henry Silva. Backing Cusack up against Comacho and his army of men is his injured-in-action partner, Detective Dorato, played by Dennis Farina.

Joe Guzaldo and Ralph Foody play the parts of Detectives Kopalas and Cragie respectively, partners in Cusack’s task force who have a simmering tension with each other that boils over before the end of the story. Mike Genovese plays Mafia loose cannon, Tony Luna while the role of his daughter, Diana, is portrayed by Molly Hagan. Ron Henriquez is Victor Comacho, Luis’ younger brother and prominent cartel member. Rounding out the cast is Ron Dean, no stranger to police-type roles, who takes on the character of Detective Brennan.

During a police sting operation on major drug dealer Victor Comacho, masterminded by Sgt. Cusack, things go to hell quickly when Mafia mobster Tony Luna and his men attack Comacho during the drug deal. Cusack’s undercover snitch is killed along with Comacho’s gang. Luna’s men also suffer some casualties but Luna is able to make off with both the drugs and the money. 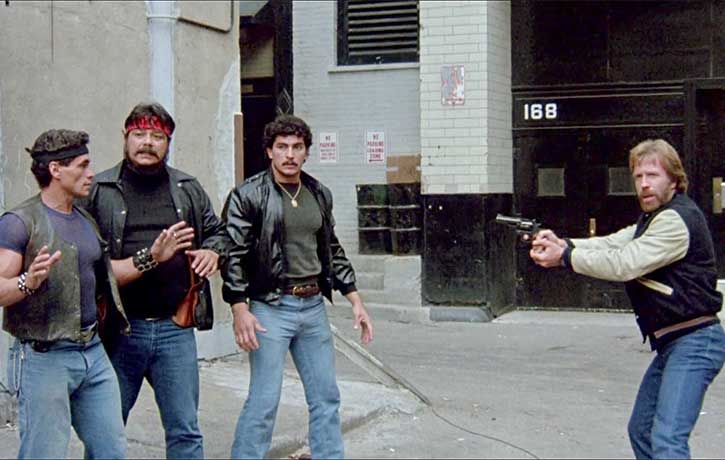 Cusack lines up his target

Unfortunately for Luna, Victor survives but more importantly can tell his older brother, Colombian cartel kingpin, Luis, what went down. Hungry for revenge, the bloodthirsty Luis orders a war on the Italian mob. The streets of Chicago will be turned into a battle zone as two powerful crime syndicates go to war unless Cusack can somehow get between them and end the conflict. As Luis goes after Luna’s family, Cusack also takes it upon himself to personally protect Luna’s innocent daughter Diana, who has the cartel army hunting her down.

If that wasn’t enough to take on, Cusack also suspects that during the sting gone bad, ticking time-bomb Detective Cragie shot and killed a kid without justification. He’s got no proof but guesses that Cragie’s partner, Kopalas, knows more than he’s saying but won’t point the finger at a fellow officer and break the police version of the Mafia code of silence. Cusack not only has to deal with the Italian and Colombian gangs but also his police comrades who don’t take too kindly to Cusack’s attitude to Cragie.

“Code of Silence” was originally written in the late seventies as a “Dirty Harry” movie to star Clint Eastwood. This might explain the emphasis on gun battles instead of martial arts combat. There are no real extended physical encounters apart from one really great fight scene.

The scene in question is a good old-fashioned bar fight where Chuck single-handedly takes on all-comers from Luis Comacho’s gang of thugs. Earlier in the movie, you can see Chuck practice various punches and kicks on some pads in the police gym, which does a nice job of teasing what’s to come in the bar brawl. One great quality about Norris’ fighting style is that it brilliantly straddles the line between what could actually work in real life while flashy enough to be visually gripping. This quality is brought to bear in “Code of Silence”.

Norris’ style coupled with the fight choreography really suits the gritty, realistic setting of the scene and story in general. Davis shoots the scene using some wide angles and without relying on quick cuts so the viewer can appreciate the speed and variety of Norris’ attacks and also clearly see what is going on. There is no real back and forth. Each blow is a devastating one causing severe damage and instantly immobilising his opponent.

A great example of this is when Norris blocks a punch and uses his momentum to perform a spinning elbow. The elbow attack is very similar to the one Jon “Bones” Jones uses at the very highest level of MMA.

We know that karate-style kicking techniques can also be a very effective weapon in real combat when utilised properly, demonstrated by fighters like Lyoto Machida and Stephen Thompson again in MMA’s upper echelons.

Chuck uses this reality-based kicking style, unleashing lighting fast side kicks, a hook kick, a jumping inside crescent kick and a low spinning back kick, all to quick destructive effect. He also throws in some crunching groin kicks which highlight even more the realistic nature the filmmakers were going for in this confrontation.

Cusack gives his adversary no chance

The rest of the movie’s main combat encounters are gun-based, including the climax which are more in keeping with a “Dirty Harry” style of cop thriller. They are all shot extremely well by Davis and executed with Norris’ usual intensity so make for some really exciting battles. A special mention must made of a chase scene on top of a real Chicago elevated train where Norris shows his willingness and ability to do some nail-biting stunt work.

Directed by a Hollywood blockbuster director, with a script worthy of the “Dirty Harry” series and all with Chuck Norris’ inimitable personality, this is a movie well worth checking out. With such a combination of talent, the film has a high-class feel from beginning to end. Don’t let the apparent lack of extended fight scenes dissuade you. It would, of course have been great to see more of them, but here it’s definitely a case of quality over quantity, ‘less is more’, with the thrilling bar clash satiating your combat craving and delivering your money’s worth.

Cusack hunts down his quarry on top of a train

Cusack is ready for the final battle

Remember “Code of Silence” from 35 years ago…? What was your favourite part and what are your standout Chuck Norris flicks and fight scenes? (Yes, you can still include a meme or two if you’re tempted!) Let us know in the comments below; Like, share and join in the conversation on Facebook and follow us on Twitter & Instagram.

What type of fighting do you prefer in your movies; the gritty ‘ground and pound’ style a la Chuck Norris or the acrobatic-wushu and taekwondo-esque types of moves? Get yourself into a whole world of FU including these Top 10 Chuck Norris Fight Scenes, Top 5’s, Top 10’s, indepth interviews, get KFK’d in the right gear, and subscribe for more via YouTube!