Few action movie franchises have as much of a wonky, non-linear history as the “Universal Soldier” movies. How many other series start out on the big screen, produce two made-for-TV sequels, return to the big screen, and then finally reach their arguable pinnacle in the straight-to-DVD arena? As if that road didn’t have enough twists and turns already, 2012’s “Universal Soldier: Day of Reckoning” takes one of the sharpest turns in the history of sequels, steering away from the series’ normal testosterone-drenched battle of biceps and dropping the viewer into a whacked-out, Aronofsky-esque “Twilight Zone” episode with the tonal vibes of a horror movie and easily the most out-and-out barbaric fight sequences that the franchise has ever delivered.

The great Scott Adkins boards the franchise in the role of John, a man whose quest for vengeance on his family’s killers leads him to uncover some disturbing truths about his own life.
Series regulars Jean-Claude Van Damme and Dolph Lundgren reprise their respective roles of Luc Deveraux and Andrew Scott, two former members of the Unisol program now find themselves at war with the very government that resurrected them. Former UFC fighter Andrei “The Pitbull” Arlovski returns from 2009’s “Universal Soldier: Regeneration”, in the role of Next Generation UniSol, Magnus, while Mariah Bonner plays Sarah, who becomes John’s ally on his vendetta. Rus Blackwell rounds out the cast in the role of the shadowy government Agent Gorman, whose motivations grow increasingly sinister as the film progresses.

Following the vicious home invasion that ended in the deaths of his beloved wife and daughter, John awakens from a coma in the Emergency Room with his memories significantly fragmented. However, he is able to identify his family’s killer as Luc Deveraux, one of the original members of the U.S. Government’s top secret “UniSol” program.

Deveraux and his fellow former UniSol Andrew Scott are now wanted men, having amassed a separatist group of UniSols intent on overthrowing the government that created them. As John embarks on his quest for vengeance, he finds an ally in the form of Sarah, a stripper claiming to be his ex-girlfriend, and as the two run afoul of the pursuing Next Generation UniSol, Magnus, John’s gradually emerging superhuman abilities quickly lead him to realize that he may have more in common with his enemies than he previously thought.

Johns reality is slowly becoming clear to him

John faces off with Sgt 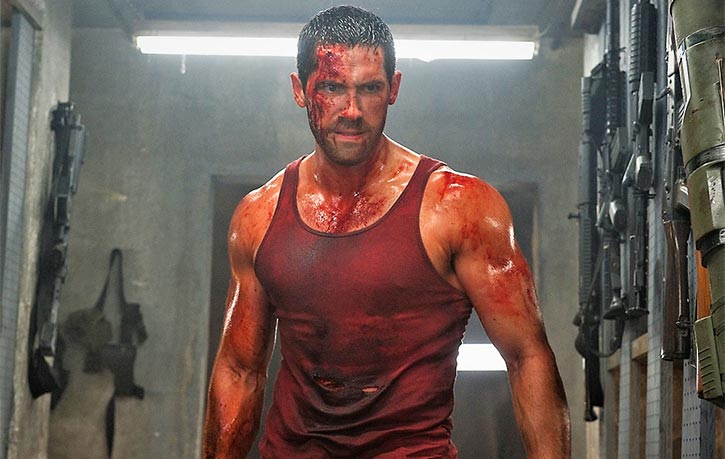 Imagine if Christopher Nolan’s “Inception” were the latest sequel in the “Die Hard” franchise, and you’ll have an idea of just how stark the tone shift between “Day of Reckoning” and the other Universal Soldier films really is. While the previous films in the series placed their emphasis squarely on formerly deceased super soldiers slamming knuckle sandwiches into one another, “Day of Reckoning” is a foreboding, reality-warping, acid-trip of a movie with some astonishingly brutal action sequences weaved into its non-linear narrative – more on those in a moment.

The opening sequence of the brutal murder of John’s family at the hands of Deveraux and his cohorts is as disorienting an introduction to an action film as you’ll ever see, and intentionally so. Director John Hyams places the viewer squarely in John’s shoes as he slowly pieces together the memory of his old life with only the murder of his wife and daughter to go on, and it won’t take long for viewers to figure out that there’s much more going on here than a simple revenge plot.

Like any great director intent on keeping his audience in the dark until the final act, Hyams deliberately withholds context and story points until the very end of the film, and delivers such a souped-up nightmare of quasi-reality that audiences will surely feel compelled to revisit the film’s early scenes after understanding their proper context, such as Andrew Scott’s strobe-light heavy meeting in a brothel with Magnus (spoiler warning – this movie is not recommended for anyone with epilepsy!). “Day of Reckoning” is the kind of action movie that holds off on the heroic body-slamming for as long as it possibly can, and while it demands far more patience from its audience than they’re likely to be accustomed to giving, the payoff is absolutely worth it when it arrives.

John finally comes face to face with his sworn enemy

The conflict between John and Deveraux intensifies

John is ready for vengeance

The film’s first big set piece kicks off just past the midpoint with John’s battle in a sporting goods store with Magnus. And under Larnell Stovall‘s action direction, two trains slamming head on into one another would arguably be less destructive than these two smashing bowling balls to dust with their fists and clashing aluminum bats together like two medieval knights. The NC-17 version of the film, released internationally and described by Hyams as “an endurance test”, also sees a far more stomach-churning conclusion to this brawl, lacking only the voice of “Mortal Kombat” co-creator Ed Boon proclaiming, “Finish Him!”

It’s also interesting to note that “Day of Reckoning” debuted the same year as “The Raid“, and both are more tonally akin to a horror film as well as being stylistically similar in their approach to martial arts action. In John’s one-man rampage through the UniSol hideout in the final act, Hyams takes a military compound and effectively turns it into a haunted house as John kicks, shoots, and grapples his way past one UniSol after another, playing out more like a one-man battle against a horde of undead zombies (and, lest we forget, these guys are reanimated dead people).

Following a gripping knife fight with Andrew Scott, clad in a red beret and black face-paint and looking like William Wallace if he joined the IRA, John finally faces off with Deveraux in one of the best fights the series has ever produced. The “Universal Soldier” franchise had seemingly reached its zenith of martial arts combat with Michael Jai White‘s show-stealing climactic smackdown with Deveraux in “Universal Soldier: The Return”. However, “Day of Reckoning” sees John enter the final confrontation armed with a machete, only for Deveraux to disarm him – the two taking turns disarming and reclaiming the machete from the other is by far the single best combative moment in any of Scott Adkins’ collaborations with Jean-Claude Van Damme.

Deveraux and his fellow UniSols prepare to launch a war on the U.S

John realizes that his memories may not be what they seem

Scott is determined to bring Magnus over to the UniSol cause

Deveraux welcomes the newest recruit to the UniSol army

“Day of Reckoning” fits in with the rest of the “Universal Soldier” franchise like a square peg in a round hole, and yet, this is the exceedingly rare instance where that’s actually a compliment. It drops the viewer smack in the middle of everything and bombards them with a bad dream of pseudo-reality while assaulting them with action sequences that boggle you with our hero’s outstanding fighting abilities. This one pushes the envelope right up to the point where you’re tempted to look away, leading up to a final scene that hits you like a bullet in the face.

It’s not often that action films fuse a cerebral vortex of art house and body horror but “Day of Reckoning” does. In other words, it’s freaking mental!

John finds an ally in Sarah

What are your impressions on this chilling, twisted, fight-fest of an entry into the Unisol series, which action scenes really got your adrenalin pumping? Let us know in the comments below, join in the conversation and share this on Facebook and follow us on Twitter (RECKON you can handle more, soldier? Then check out our other movie reviews and interviews!)