Dolph Lundgren initially trained in judo at the age of 16, switching to karate a year or so later. Dolph started in the traditional Japanese style Goju-ryu, but soon switched to Kyokushinkai, the more powerful style developed by Japanese karate legend Mas Oyama.

In 1979, whilst in the Swedish Marine Corps, Dolph was selected to fight in the 2nd World Open Karate Tournament in Tokyo, one of the earliest international full-contact tournaments. Still only a green belt, Dolph had to borrow a brown belt to be eligible to fight. Dolph knocked out his first two opponents lining him up against the overwhelming favourite for the world title, Makoto Nakamura. Dolph, the green belt, weighed 93kg to 2nd degree black belt Nakamura’s 110kg. The fight went the distance plus two extended rounds, and Nakamura was awarded a controversial decision. It proved to be the eventual world champion’s hardest fight.

Katas in the park 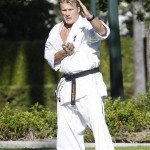 Keeping in shape is one of Dolphs key philosophies

Its never too much of a stretch for Dolph

Facing off with Stallone in Rocky IV

Lundgren has faced JCVD several times over the years

Pounding the bag in his younger days…

Dolph vs Gary D in The Expendables

Even in his fifties Dolphs still got the moves

Dolph said about the fight, “My sensei, Brian Fitkin was furious that Nakamura kept using a lot of foul techniques, and he told me to drop Nakamura with a “Kingeri” (kick to the groin – also a foul technique), but I guess I was too much of a nice guy to obey. Even though I lost that fight, I knew that I too could become a champion.”

Dolph went on to win the British Open Knockdown Heavyweight title in 1980 and 1981, and also became Australian Open Champion in the individual and team events a year later. At the age of 23, Dolph earned his 1st degree black belt.

Eventually settling In New York, Dolph trained with 7th Dans Tadashi Nakamura and Shigeru Oyama, and planned to enter the 3rd World Tournament in Tokyo. Wanting to improve on his previous effort, Dolph trained every morning at 5am, warming up with a five mile run and practising karate for two hours. Every afternoon was spent lifting weights or sparring for another two or three hours. He was spotted training at the famous “Gleason’s Gym” in midtown Manhattan and offered a boxing contract. Despite the huge temptation, Dolph turned down the offer.

Dolph’s endeavours in the film world meant he never did get to compete in the World Championships. Nevertheless, Dolph maintained his Kyokushin karate training. He has performed karate exhibitions at three World Tournaments and on numerous other occasions. His long-time friend and teacher, 6th Dan Shihan Brian Fitkin, has helped his old student in most of his movies with physical conditioning and fight coordination. In 1998 Dolph returned to his “home dojo” in Stockholm to earn his 3rd Dan. His grading included a gruelling 20-man Kumite (fighting twenty successive opponents one after the other without a break), as well as three hours of technical examination.

Dolph tries to sum up what martial arts have meant to him: “Karate has been so important to me, it is almost impossible to imagine myself and my life without it. Every time I’ve strayed away from the martial arts, I’ve somehow lost part of myself.”

“It was through martial arts that I confronted my insecurities, gained inner strength, broke through my own self-fabricated barriers and came into my own as a man. Karate and physical training has definitely become part of my life forever.”

“More importantly, I believe the martial arts made me — and still makes me –a better person.”

Hans Dolph Lundgren was born and raised in an academic middle-class family in Stockholm, Sweden. As a teenager, Dolph suffered both physical and verbal abuse at the hands of his father.

Dolph has said that the physical abuse he endured later motivated him to pursue both contact sports and the dramatic arts, “I still love my father, no matter what happened. There are many things about him I still admire. As a child, I was probably too much like him, very stubborn — perhaps that’s what he couldn’t deal with”.

After completing two years military service in the Swedish Marine Corps, Lundgren enrolled in the Royal Institute of Technology in Stockholm. Graduating as a straight-A student, Dolph earned a scholarship to study in the United States. He attended both Washington State University and Clemson University, studying Chemistry. Dolph graduated from The Royal Institute of Technology in Stockholm and completed his Master’s Degree in Chemical Engineering on an exchange program with the University of Sydney in Australia. Graduating at the head of his class, Dolph was then awarded a Fulbright scholarship to the prestigious Massachusetts Institute of Technology (MIT) in Boston, one of the world’s top engineering schools.

After becoming romantically involved with model and actress Grace Jones, he made his motion picture debut in the James Bond film “A View to a Kill”.

Whilst maintaining a consistent schedule in the movie industry, Dolph has also managed to raise a family. Dolph married Anette Qviberg-Lundgren, an interior decorator and fashion stylist, who he met in New York. The pair have two daughters, Ida and Greta. It was reported in 2011 that the couple had divorced.

Shortly after appearing in “Rocky IV”, Dolph Lundgren released his workout video, “Maximum Potential”. After nearly 30 years in show business, he is finally working on his pet fitness project. Dolph is currently writing a fitness book for men and also developing a DVD workout series, personal training seminars, a personalised organic brand of vitamins and supplements, as well as a men’s skin care product line.

Dolph is also an accomplished drummer

In the early eighties, Lundgren was earning a living as a nightclub bouncer. International model, singer and actress Grace Jones, hired Lundgren as her bodyguard, and they eventually became a couple. Jones got the part of the deadly “Mayday” in the 1985 James Bond film “A View to a Kill”, in turn getting the physically impressive Lundgren a small role as a henchman. The experience made Lundgren decide to pursue a career in acting. At the time, the producers of the new “Rocky IV” film were on the lookout for an imposing fighter to play opposite Sylvester Stallone. Lundgren tried out for the role, but was initially turned down because he was too tall. However, he eventually beat a reputed 5000 other hopefuls to land his breakout role as the ice-cold Russian boxer, Ivan Drago.

Dolph has said of his big break, “I walked into a Westwood movie theatre [at the “Rocky IV” premiere] as Grace Jones’ boyfriend, and walked out ninety minutes later as the movie star Dolph Lundgren. I was shell-shocked for years from the mind-boggling and daunting experience of being a student-athlete from tiny Sweden, suddenly having to live up to a new action-star persona”.

Since then he has managed to build a solid career as an international action-hero and has since starred in more than thirty-five feature films, and directed five. Lundgren played the classic action lead in such films as “Masters of the Universe”, “Showdown In Little Tokyo”, co-starring the late Brandon Lee, “Blackjack” directed by Hong-Kong action legend John Woo, and memorably played the main villain in “Universal Soldier” opposite Jean Claude Van Damme. His more recent successes have seen him join fellow action stars such as Sylvester Stallone, Bruce Willis, Arnold Schwarzenegger, Jason Statham, Jet Li and his old friend, Jean Claude Van Damme, in “The Expendables” franchise.

Dolph is still very active in the action movie business, with “The Expendables 3” due out in the summer of 2014, and also teaming up with Thai martial arts star Tony Jaa in “A Man Will Rise” and “Skin Trade”.

Dolph still hopes to direct a period piece set in Sweden, “I have a script I’m trying to get made that’s one of my dream projects”, he says. “I’d love to do something that’s closer to my home country. When I appeared as a host of a Swedish TV show early this year, the reception my countrymen gave me was fantastic. When I saw my kids, who haven’t spent that much time in Sweden, sitting in the audience savouring the moment – it made me feel like all those years of struggle actually paid off!”

On his directing career, Dolph has said, “As a director I feel there’s a way to deliver on the expectations and still give the audience more than they bargained for on an emotional level. That’s exactly what Clint Eastwood has done for years – he is one of my big role models. A man who went from television cowboy to one of the world’s most respected actors and directors.”

“I’m just a bit younger than Mr. Eastwood so there’s still time. As long as I keep working, learning and going to the gym!”