Making a sequel that tops the original is nothing less than a science, and the ones that manage to pull it off are all about escalation and upping the ante from what the original delivered – both feats that “Best of the Best 2” practically accomplishes with its eyes closed. Reuniting director Robert Radler with the original stars of the series, Eric Roberts and Phillip Rhee, “Best of the Best 2” more than lives up to the arithmetic boast of its title, with double the scale, double the action, and quite literally, double the villain!

Eric Roberts returns to the role of Alex Grady, while the always amazing Phillip Rhee reprises his role as the series’ undisputed star, Tommy Lee. Their co-star from the original “Best of the Best”, the late Chris Penn, also returns in the role of Travis Brickley, while Edan Gross also reprises his role as Alex’s ambitious young son, Walter. Meg Foster steps into the role of TV newscaster and Alex’s new love interest, Sue, while Betty Carvalho assumes the role of Tommy’s adoptive grandmother, and Sonny Landham appears as her alcoholic son, James, towards whom Tommy holds a serious grudge. Phillip Rhee’s real-life brother Simon also returns as his old-rival-turned-blood-brother, Dae Han. The series also sees the debut of its greatest villain by far in the form of the fearsome Brackus, played by bodybuilding champ Ralf Moeller, while famed Las Vegas showman Wayne Newton appears in the role of Brackus’ slimy associate and fight promoter, Weldon.

Deep in the heart of Las Vegas nightlife, wealthy high-rollers cheer for the modern day gladiators who compete in the underground arena known as “The Coliseum”. Any fighter who wins three consecutive matches is not only rewarded with a hefty payday, but earns the right to challenge the arena’s overlord, the towering Brackus, for ownership of the Coliseum.

Tommy heads into The Coliseum to avenge his friend

Brackus rules over The Coliseum with an iron fist

Unbeknownst to his good friends Alex Grady and Tommy Lee, with whom he runs the East-West Martial Arts Academy, former U.S. Karate Team member Travis Grady has been competing in The Coliseum, and exercises his right to challenge Brackus. However, the overconfident Travis badly underestimates Brackus, who brutally defeats and kills him.

Although Brackus and his fight promoter Weldon are able to pass off Travis’ death as an unfortunate car accident to the police, Alex’s young son Walter witnesses the murder, and after Alex and Tommy vengefully confront Brackus, the latter finds himself a marked man after leaving a nasty scar on Brackus’ face. With Alex, Tommy, and Walter hiding out on the farm of Tommy’s Native American grandmother to prepare to take down the friend’s killer, Brackus orders his men to bring Tommy back alive to fight him in The Coliseum in order to avenge his only defeat.

It’s exceedingly rare that a single new character proves to be as emblematic of the new territory a sequel is heading into as is the case with “Best of the Best 2”, but that’s absolutely true for the domineering Brackus. The moment our massive, egomaniacal villain appears on screen, chiding one of his underlings for carrying a sidearm on the grounds that “Warriors fight here!”, “Best of the Best 2” puts its cards on the table and shows just how much it’s ramping things up from its predecessor.

In the role of Brackus, boastfully introduced by Weldon as “The Supreme Warrior who has never known defeat”, Ralf Moeller is as powerful a villain as “Best of the Best” could ever have asked for. Six feet and five inches of solid, impenetrable muscle, with a psyche of pure narcissism, and nearly as delectably quotable a repertoire of villainous one-liners as Raul Julia’s rendition of M. Bison (“Easily”, Brackus icily intones after Alex asks if he killed Travis). Brackus himself isn’t the only upgrade seen in “Best of the Best 2”.

Tommy limbers up to take down Brackus 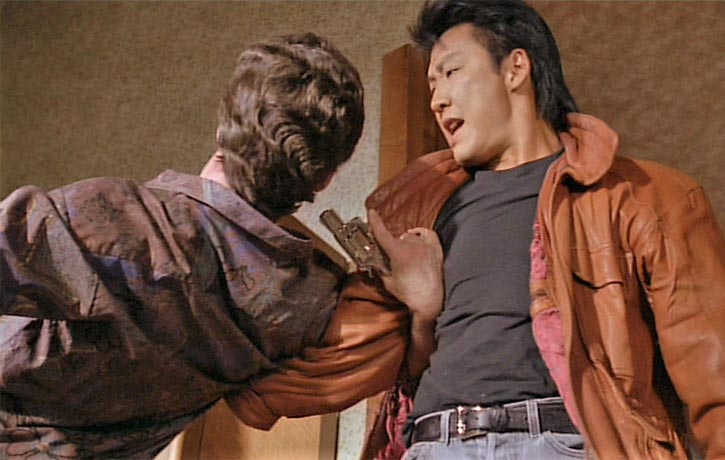 Tommys enemy has some second thoughts about pulling the trigger

The film as a whole simply feels grander and more engrossing than the original, and nowhere is that better seen than in The Coliseum itself. With Weldon enthusiastically emceeing MMA fights to the death in the arena, the cheering, bloodthirsty crowd and the arena’s regal intro theme combine to give a genuine feel of watching gladiators wage war in ancient Rome.

When it comes to martial arts action, in everything from “Way of the Dragon” to “The Wrath of Vajra”, there’s really nothing that beats a good amphitheater arena setting for a real sense of grandiose scale, a feat “Best of the Best 2” pulls off masterfully.

Given how much a feast of outstanding action the original “Best of the Best” was, it’s remarkable just how much more of a powerhouse “Best of the Best 2” proves to be. Opening with a flashback montage of the first film’s climactic tournament (which is further accompanied by a brand new guitar theme that fits the series to a tee), the film could conservatively be estimated to let no more than seven minutes go by without some butt-kicking.

As with the first film, “Best of the Best 2” is a “Green Hornet” scenario, where the Asian buddy who technically has second billing is real star of the film. That’s not a knock to Eric Roberts by any means, as he performs quite well in his action scenes, but there’s just no denying that Alex Grady is The Green Hornet to Tommy Lee’s Kato. Phillip Rhee is absolutely out of this world in the role of Tommy, and his blend of Taekwondo kicks with Hapkido throws may well be the only on-screen fighting style of its kind in American martial arts films.

Walter reaches the final stage of his belt test

Brackus gets Tommy on the ropes

Dae Han comes to town to help Tommy and Alex

Tommy in a tough spot with Brackus

Of course, “Best of the Best 2” is as devoted to training as the original was, and gives Alex and Tommy a chance to learn a few new skills from Tommy’s adoptive brother James, himself an old enemy of Brackus’. While there’s no shortage of fantastic combat sequences throughout the film, such as a scuffle in Alex’s home where Tommy doesn’t break an opponent’s wrist so much as crush it, the last third of the film is where the hard-hitting martial arts we came for seriously delivers.

On the advice of Weldon, Brackus, obsessed with rectifying his only blemish as a fighter, puts Tommy in The Coliseum to make a quick buck before taking his vengeance, leading our hero to battle his way past a series of increasingly challenging adversaries including one gentleman who does Bruce Lee proud with his nunchuku skills.

Tommy’s final battle with Brackus in The Coliseum is a true David vs Goliath duel to the death, one that holds a place of honor on KFK’s list of Top 10 David vs Goliath Movie Fights, and is easily the series’ crowning achievement of martial arts action – even throwing in a little ancillary combat with Alex and Tommy’s former rival Dae Han storming The Coliseum to help their friend. Like Weldon and Brackus themselves, “Best of the Best 2” knows how to give its audience their money’s worth and then some!

As cliche as it sounds to hear that a movie lives up to its title, or that a sequel has outdone the original, “Best of the Best 2” is a textbook example of both. The production design and soundtrack for The Coliseum gives the film a gripping feeling of grandeur and scale, Ralf Moeller makes a superb villain in the role of Brackus, the fight sequences strike a flawless balance between quality and quantity, whilst Phillip Rhee in probably the best shape of his life, consistently blows viewers away in one amazing duel after another.

In a series that has never let martial arts fans down, “Best of the Best 2” is the best film of its franchise, and more than worthy of the showmanship with which Weldon announces its setting – “Ladies and Gentlemen, Thhhhheeee Coliseum!”

Soundtrack – “Best of the Best” by Mark Free

Weldon emcees fights to the death in The Coliseum

Brackus rules no guns in The Coliseum

Dae Han strikes down the enemy

Tommy is ready in The Coliseum

25 years on…how does this sequel fare in your opinion, do you think it hits above its original? What are your best moments from the franchise? Let us know in the comments below, join in the conversation and share this on Facebook and follow us on Twitter (Inspired to be the best? Awaken your own inner-warrior with our other movie reviews!)